Mark Wallinger: Upside Down Inside Out Back to Fro...

Mark Wallinger: Upside Down Inside Out Back to Front 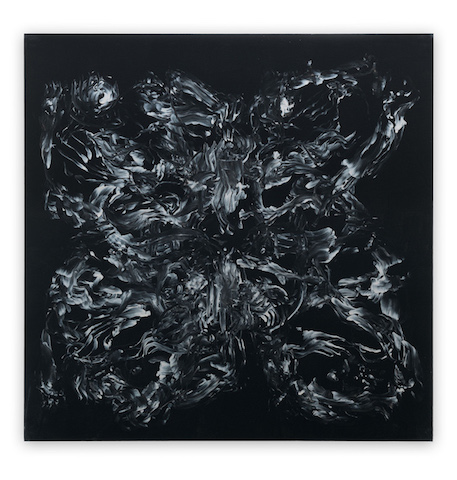 Mark Wallinger, born 1959 in Chigwell, Essex, is one of the most important artists of his generation. Widely known for his sculpture Ecce Homo, the first sculpture presented at the fourth plinth at Trafalgar Square in 1999, also exhibited in the British Pavilion at the 49th Venice Biennale in 2001 as well as in a solo exhibition at the Secession in 2000 in Vienna. In 2007 he won the Turner Prize for his installation State Britain.

The exhibition, entirely devoted to his paintings, is the artist’s third solo show at Galerie Krinzinger. Upside Down Inside Out Back to Front brings together paintings made since 2015, incorporating three distinct, but related bodies of work, entirely hand-made and related to the proportions of the artist.

The id Paintings (2015/2016) are black-and-white monochromes that grew out of the extensive Self Portrait series (exhibited at Krinzinger in 2013). Each canvas is the width of the artist’s span or height (180cm), by double height (360cm). They mark a significant shift from the painted ‘I’ to ‘I paint’. These performative works follow the traces of the artist – both hands working simultaneously to achieve symmetry on the upright canvas. The painting is flipped halfway through the process and thenceforth there is a dialogue for the other half to take part in. These pieces bear some resemblance to the psychological Rorschach test: the standard set of symmetrical ink blots of different shapes and colours presented one by one to a subject who is asked to describe what they suggest or resemble.

The Action Paintings (2017) are painted silver into black, wet on wet. The paintings capture four actions, (the canvas revolved by 90 degrees for each action) in the quickly drying paint. These works represent part of a larger concern with self-reflection, and how the trace of the hand’s gestures are indicative of the artist’s presence within the work: relaying movement and creating an unexpected illusory space that give the paintings a curious photographic quality. The title Action Painting is obviously the term Harold Rosenberg coined in 1952 to describe how the canvas became ‘an arena in which to act,’ the painting being the residue of the act or process of painting itself. However, Wallinger dispenses with brushes and the ‘brush mark’ as some kind of authentic trace of the artist’s psyche, and makes literal ‘the hand of the artist.’

The Mirror Paintings (2018) have developed from the Self Portraits and id Paintings. The artist comments ‘Again working directly with my hands I began using silver paint on black grounds and working wet into wet. There is a hard-to-define embodying of gestures achieved by dint of the reflective nature of the paint and I was interested in paintings that shift and change according to the position of the viewer and the existent light. Pushing further I began to cover the entire expanse of the canvas with silver. These are worked in layers until the finished works are a palimpsest of their making, simultaneously registering the material of paint with depth and reflection. The surface sheen picks up the final gestures like the nap on cloth.’

Through the use of silver paint applied with the artist’s hands in free-form gestures these new works represent a further fetishized encounter with the canvas. The memory of his touch is suspended in the substance of the paintings. Their surfaces are insistently sculptural, tracing his hand and fingerprints, asserting direct and immediate engagement. They also take on an unpredictable illusory quality as the material sets. This transformation infuses the paintings with ‘a quality of otherness,’ a sense of elusiveness that Wallinger likens to gazing through the surface of water.