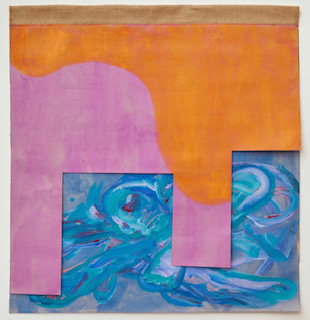 Wednesday 16 November, the Hub/Art gallery in Milan opens the exhibition Líneas de palabras by the artist Daniel Barclay, curated by Greta Zuccali and Marta Blanchietti in collaboration with the General Consulate of Perù in Milan.Promoted by the GAG London Equity Capital group, the exhibition is supported by Interface Power and McVector ltd, which is in charge of communication.

Daniel Barclay is a visual artist, born in Perù, currently working in São Paulo, Brazil. The year 2022 saw the artist involved in VIR Viafarini-in-residence, a shared studio programme for artists and curators. During the residency, the artist developed a work on the relationship between space, people and monuments. This resulted in two series that will be exhibited in two different venues in the city of Milan. The first, to be inaugurated on 8 November 2022, is entitled Líneas de horizonte and will be on display at the General Consulate of Perù in Milan. The second, entitled Líneas de palabras, will be inaugurated at Hub/Art on 16 November 2022.

Marta Blanchietti wrote in connection with the artist’s work: “A central aspect of Barclay’s artistic practice is abstraction. Dissonance and movement in space and time are key elements of his work. Part of the selection presented in the Hub/Art rooms, through an innovative approach, investigates in the abstraction of forms, the relationship between space and monuments. The materiality of the statues loses its strength and becomes an interplay of shapes and colours within different material planes.”.

For years, the artist has been developing works in close relation to politics and violence. The role of monuments in space and their relationship with society evoke the theme of cancel culture, which has been arousing heated debate for some time now not only in the Anglo-Saxon world but also in Italy. The artist measures himself against the complicated issue of the limits of freedom of expression and the equally complicated distinction between celebration and oppression in the form of monuments on the public square.

In Barclay’s work, the monument, or rather the anti-monument, becomes the site of impermanence.

By its definition, the monument is intended to last forever, not only in its physical form but also and above all in its meaning. In reality, writes Marta Blanchietti: “The value that a  monument carries in its materiality and the strength of that strength of that message varies over time, and is historically, socially, culturally determined. A monument lives from its relationship with the who enjoy it.”

Therefore, along with the external material form that tends to be eternal, an entire conceptual apparatus is fluid and variable, articulated in a continuous cross-reference between signifier, signified and user. A subject that the artist and the curators also try to represent with the exhibition set-up, which will lead the works to be observed from unusual perspectives.