A Really Good Dictionary of Modern and Contemporar...

Enrica Borghi, on the tail of ..

A Really Good Dictionary of Modern and Contemporary Art 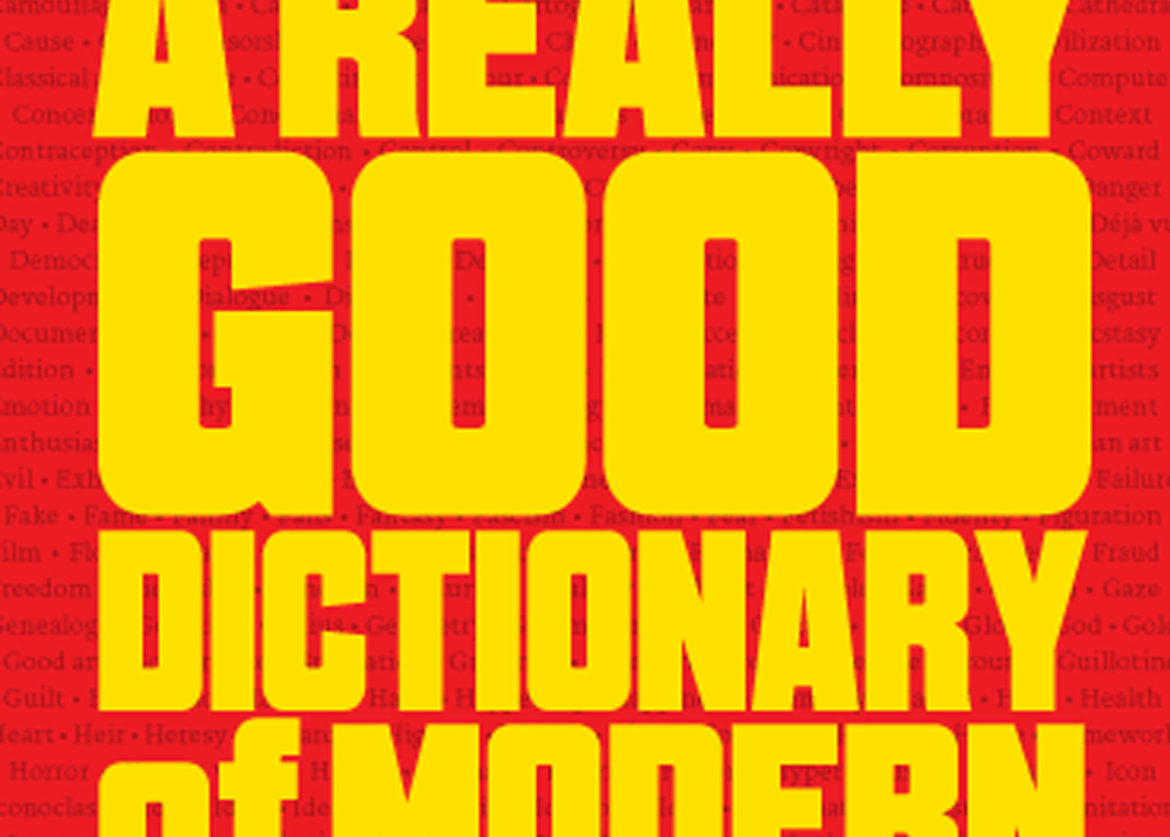 Stefan Haus (1980, Slavonski Brod) is an author based in Zagreb (Croatia) whose philosophical, thought-provoking writings stimulate curiosity and encourage further inspection. His last work A Really Good Dictionary of Modern and Contemporary Art, recently published by ;paranoia, is a racy dictionary in which art is described through 500 key words. The Dictionary uses both typical and atypical terms to demonstrate modern and contemporary art’s reproductive nature. From many different angles, the Dictionary speaks and shows how art of the last 130 years reproduces our nihilist misfortune in many forms: historical, political, scientific, cultural and others. Instead of that, Dictionary urges the reader to reject such bad reproduction and tell everyone that good art is not in succeeding in formal qualities of a work, but rather, it is in causing salvation in the viewer.

Where does the idea of this Dictionary come from and what was the first nucleus of words you thought about?
Several years ago, I was writing a blog about contemporary art, where on occasion I used unusual and even entertaining forms of writing, such as riddles, poems, fictitious interviews, titles of articles never written, court orders, etc. One of these blog posts was in a form of a dictionary, titled: A Teaser for a Really Great Dictionary (the letter C). The letter C was chosen randomly. The post consisted of 17 entries, from Capital to Cyber. Letter C in the book has 49 entries, from Camouflage to Cynic. Two years after writing that post, the idea came back to me in the form of an entire book on the subject. I checked few existing dictionaries on the subject, took from there some of the more general terms, and gathered others from the philosophical tradition but also from everyday life. I have basically chosen terms that would serve the purpose of the book in a provocative way. All the terms aim at one thing and one thing only: the turnover of art practice. Just like with everything else, terms, words, names and things are being taken all too lightly, too democratically and ignorantly, and the book wants to put some pressure on the terms we normally use while discussing, writing or thinking about modern and contemporary art.

Why do you say in the preface that the subject of the book is its enemy?
Subject of the book is modern and contemporary art’s reproductive nature. Even when criticizing the world and its horrors, art reproduces it, it conserves it, making its audience more and more used to it, more domesticated, more enslaved. This reproduction is the book’s enemy. The Dictionary wants to destroy this. When I say destroy, I don’t primarily or necessarily mean the actual destruction of artworks (although this is worth pondering about, considering how understanding of art has turned into a perverse adoration of objects, if not something even worse – isn’t real or true understanding of Malevich, Picasso or Pollock, once and for all times, enough to not get back to their paintings ever again?). The destruction I have in mind is the destruction of possibility of such an art. After reading the Dictionary, I hope that the reader will find the entire history of modern and contemporary art to be impossible. Factually, it may still be there, in museums or in books, but essentially, it would be gone – once the reader discovers, or actually, rediscovers that the essence of art is not reproduction of falseness and ugliness but production of truth and beauty. Regarding the enemy, it’s important to realize how art is not some force outside of a human being. It’s part of our human nature. Having said that, the book aims to destroy that part or that tendency of ours, which slaves to what’s in front of us. Just like Plato shows in the Republic, what we think is real, is not really real. So, the enemy is inside us, and we need to find that freedom in ourselves which is able to see over all history and leave it behind.

The book composes a fragmented storytelling of the art of the last 130 years, it mentions artists and movements of great success with a funny polemical verve. What are the positive examples for you to look at?
Van Gogh is obviously one such positive example. Although it remains questionable if he’s an artist, and if yes, if he is a modern one. Remember, he wanted to be a preacher, and he wrote to his brother how for him colors are sacred. Van Gogh was actually a theologian. But the only positive thing that is to be found in modern and contemporary art, are the masterpieces that have such a depth hidden in them, which allows us to really grasp all the weight that is on our backs. To take out the positivity, so to speak, out of all the negativity present there, is to understand the art, really understand it. Not feel it, not experience it, not buy it, not look at it – but understand it. Art is a great vehicle to a sphere where the whole of modern and contemporary life takes place. For instance, one of the most misunderstood or not-at-all-understood contemporary artists working today is Jeff Koons. People mostly think he is all expensive kitsch, decorative trash art without any substance. And yet, the lack of substance is paradoxically the substantial subject of his work. One needs to understand this. His Sacred Heart sculpture (from the Celebration series) shows a heart wrapped in cellophane. To understand this sculpture, to emancipate one’s self from the modern times is to realize what heart really is and what it is when a heart is denied air. I don’t mean medically, but philosophically. For ancient Greeks, heart was a central place in a human being, containing all our powers, from the lower bodily ones, to the highest intellectual ones. Also, wider and deeper than that, philosophers realized that everything alive (everything that is) has a heart, even Being itself. Not to mention the Christian aspect, with the sacred heart of Jesus. I mean, what is Jesus really, what is his heart? What is Christian mythology metaphysically telling us? Jesus Christ (“The Word Became Flesh”), is a mediator between an origin of life (“God”, “Father”) and history, and world. This means that Koons’ Sacred Heart is showing or reproducing how liveliness of everything alive (with all of its possibilities and forces) is trapped inside plastic, suffocating. Again, the only positive thing here is the richness of the material to work from. It would be fruitful for some art history student to do a dissertation on this sculpture, where all the preconditions and necessary consequences would be dealt with.

What do you think about the so called “art system” and in which way does it condition the practice of artists?
Art system is a part of a bigger system, that of an entire world or network that consists of science, technology and capital. This system, as the word itself says, puts things together in an organized whole, where each thing or being is scientifically known, technologically produced and serving capital. Art is a disciplined part of that system: it has its science (art history), it has its technology (art education system of art academies etc.), and everything in it is for sale, everything serves to enrich capital: both art-works and art-people. Therefore, this art system conditions the artists to behave nice: to do what others before them did (even if that sometimes looks like a revolution, breaking the mold, avant-garde, and so on), to do it well, and to sell it. Art as we have it in modern and contemporary art history, serves the system, it belongs to it. On the other hand, the Dictionary is trying to awaken art (and the humanity behind the art) which would have a system of its own, art that would produce something and not reproduce the empire of nothing, art that would have the know (science) and the how (technology) to produce wealth that is not wealth of capital, but wealth of the best of lives for all beings. Art system that the Dictionary has in mind would have all the members of the system (artists, writers, museum directors, collectors, etc.) serving this sort of wealth.

In this book I greatly appreciated the unusual and lateral point of view, the idea of ​​describing art through words usually not directly associated with it but intimately related to the reasons of the artistic production. Even if I do not fully agree with the basic thesis of the dictionary – that the exclusive mission of art is to provoke the redemption of the spectator – I think the text sensibly picks up the main instances of making art today. Would you define your writing as an artistic operation or a social criticism?
Well, it’s both, if you understand criticism as production. Criticism differentiates right from wrong, true from false, good from bad. It is an artistic operation because it artistically produces something (the need for other kind of art production and life production), and it is social criticism because it differentiates or divides the false in both individual and social art practices from the true. Speaking of redemption or salvation (not only of the spectator but of the artist as well, and also everyone else), I must note that, as the tradition from Pindar and Plato to Nietzsche knows it, it’s simply about being what one truly is – not about what one is not, as is shown in modern and contemporary art from Giacometti and Picasso to Prince and Baselitz: a disfigurement, a copy of a copy or turned upside down, or if you will, a servant to that system we mentioned. The writing of the Dictionary is a love letter to the future that has always been behind us. 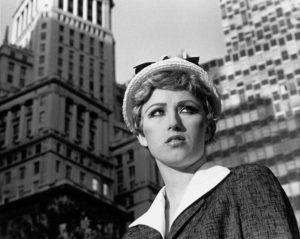 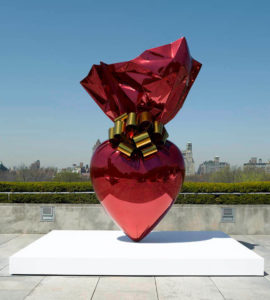 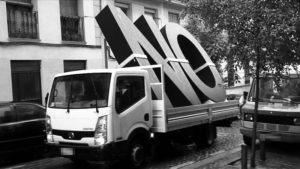 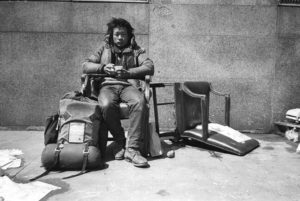 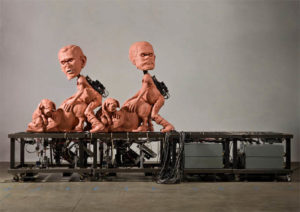 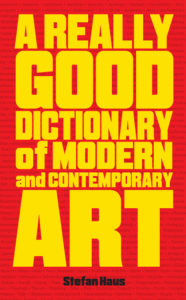