Anthropocene: a journey without return to anthropi...

The most honest elegance in Gi..

Anthropocene: a journey without return to anthropization

The term Anthropocene derives from the Greek anthropos (man) and was coined in 2000 by the Dutch chemist and atmospheric scholar Paul J. Crutzen and by Eugene Stoermer. Since then, also thanks to the research of an international group of scientists (Anthropocene Working Group) engaged in collecting evidence of the passage from the Holocene – a geological epoch that began about 11,700 years ago – a new era inexorably marked by human interference, the discussion is on political responsibilities for this change and the consequences that will result in the medium and long term. If from the geological point of view the concept of Anthropocene is still being defined, the fact that human behaviors condition the existence of every living organism on the planet is an incontrovertible fact. The human species has become the single most determining force on the planet: mining, urbanization, deforestation, industrialization, agriculture, the proliferation of dams and the deviation of waterways, over-production of CO2 and the acidification of the oceans due to climate change, the pervasive and global presence of plastics, cement and other techno-fossils have undergone an unprecedented surge in recent decades and are destined to increase even if they fail to reverse course. The first step for change is the achievement of a collective awareness of the extent of the indelible human imprint on earth, whose effects are destined to last and influence the course of future geological eras.

At the MAST Foundation, the Anthropocene exhibition investigates the impact of mankind on the planet through iconic images by Edward Burtynsky, videos by Jennifer Baichwal and Nicholas de Pencier and augmented reality installations. The idea was born in 2014, when the photographer and the two directors met in Washington DC for the presentation of the film Watermark and decided to join forces in a grandiose artistic project that inevitably leads to ethical and scientific research. The objective of the three is to give an effective aesthetic form to the signs of globalized human activity in the environment, guided by the idea that the abuse of natural resources represents not only a threat to the future, but an essential factor to understand the direction that our life is taking. Since then the artists, in constant contact with the AWG, have traveled to all the places on the planet where anthropization is particularly evident and massive to collect disturbingly spectacular testimonies of the invasiveness of human systems.

The result is a multimedia exploration that goes beyond the boundaries of the documentary to tell the story of human incursions on a global scale. From the breakwater barriers built on 60% of the Chinese coasts to the cyclopic mining machines built in Germany, from the psychedelic potassium mines in the Ural mountains in Russia to the devastation of the Australian Great Barrier Reef, from the surreal lithium evaporation tanks in the Desert of Atacama to the marble quarries of Carrara and to the endless landfill of Dandora in Kenya, terraforming emerges as an unstoppable negative epic in which the urgency of a message that humanity can no longer ignore manifests itself with terrifying visions of sick beauty.

The main method used for the shoot is that of a very high definition aerial view made with cutting-edge technological tools, which allows an exceptionally clear overall view and an incredible precision in details if examined closely. This technique, combined with the environmental dimension of the prints and with augmented reality inserts accessible through the AVARA App in some key points of the images, create an immersive experience that amplifies the veracity of these breathtaking views. The murals were created by combining hundreds of photographs in order to create perfectly focused panoramas in the whole extension of the image that goes beyond the visual field and the focal length of the human eye in an extreme postmodern derivation of the Sublime of nineteenth-century memory.

If the so-called scientific progress, financed by capitalist interests, seems unstoppably oriented to push the planet’s resources far beyond their natural limits, some visions of pristine landscapes on show remind us of how these places were in an emblematic invitation to ask ourselves how we can prevent their extinction. Here too the photographic lens and the camera are used to their maximum potential to document the wonderful ecosystems that survive despite everything – despite us – in the most remote corners of the world and emphasize the beauty of biodiversity that we are risking losing.

Particularly significant in this regard is the series of shots taken with underwater camera at the coral reef of Pengah, in the Komodo National Park in Indonesia, one of the purest still alive. The climatic conditions of the place preserve the extraordinary variety of that delicate ecosystem, which is home to 25% of all marine species. With the support of a team of divers, Burtynsky has taken hundreds of photographs over 18 meters deep from the ocean surface to then create an astonishing mosaic of images that reproduces the almost natural size, while allowing each to catch every minimal detail, invisible to the naked eye due to the absence of light. The incredible chromatic richness of this panorama contrasts with the video extensions of Baichwal and de Pencier that observe the Australian Great Barrier Reef to show the bleaching of corals due to the increase in temperature and acidity of sea water.

The impeccably neutral aesthetic approach of the three artists, which involve the general public as a witness to the usually hidden effects of the impact of civilization on the planet in a spectacular way but without showing any ideological stance, wants to contribute eloquently to animate the debate on possible solutions to this global problem. Confident as Burtynsky that art is “a powerful mechanism that shapes consciences” we can only invite you to visit this exhibition and venture courageously to the places where we are already shaping our near future. 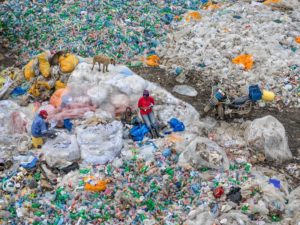 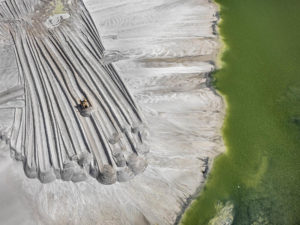 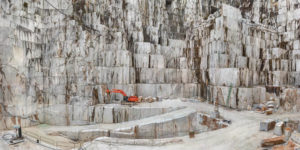 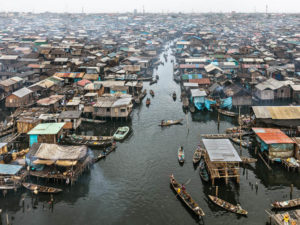 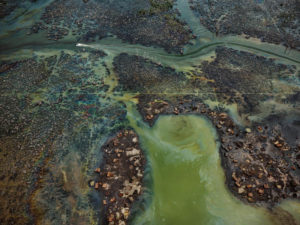