The Royal Academy in London celebrates the British artist, Sir Antony Gormley, and pays an homage to his sculptural practice that since its early stages, has been recognized such as for the work Fields for the British Isles, 1994 which has been awarded of the Turner Prize, and which has continued through a number of significant interventions whether be it nationally, such as for the emblematic figure Angel of North, 1998, whether internationally, such as for the sculptural complex Asian Field, 2006, presented in Sydney in 2006, the Event Horizon series, conceived for Madison square in New York, 2007, the 2010 site-specific commission designed for the Austrian Alps, not to mention the solo-show Drawing Space at MACRO, Tome in 2010, up to the double contribution designed for the Uffizi Galleries in Florence in 2019.

At the Royal Academy, once again, Gormley rethinks sculpture via its negative space, holding together a fabric of relations between space and the body by exploring the environment and the social context wherein it inhabits. In particular, in this show, the artist performs a dual gesture that reflects the body as a vessel of feeling between its internal and external limits to suggest a thought for what could be a social construction of the collective body. While on the one hand, his works invite us to rethink space as a proprioceptive landscape, urging a sensory experience that wants to create awareness for the self in relation to the multiple, on the other hand, Gormley explores the possibilities of sculpture as a practice of social change. By making himself the model of his own sculptures, Gormley carries out on an artistic research on the body that, in its simplicity and imposing majesty, makes itself the construction of a sensory and psychological dimension by revealing new dimensions of thought.

With this vision, Gormley shapes a contemporary vision of the body through a careful choice of materials such as wood, molten lead, and 98% recycled steel, and articulates a context and a structure of relations between one and the multiple. The result is an installation process that moves away from an idea of ​​sculpture as an object to face a dimensionality that is composed of new geometries and which finds an ultimate goal in the body to explore the potential for what could mean today exist and live the space social. In this sense, his practice refers back to historical time through prehistoric memories and  echoes modern artists such as Giacometti, Arte Povera and Land Art, through a postmodern approach as he suggests in the small-format sculpture, Iron Baby, 1999, which we encounter in the atrium of the Burlington House and invites us to reflect on the human condition in the contemporary context.

His first works are characterized by studies and researches from the 90s when Gormley began to develop his sculptural language starting from the study of everyday objects – a bowl, a stick, rocks, slices of toasted bread, wherein we can see the emergence of a new thought between the sensible and the conceptual. Here, overcoming the idea of ​​a sculptural object, Gormley favours the relational dimension of sculptural space. The exhibition articulates as a field to be traversed along the halls of the Royal Academy wherein the artist fixes the gestures of his actions in space according to the x, y, and z axes which take into account the function of time and the speed of light away from the system of Cartesian coordinates.

The spatial sculpture Co-Ordinate VI, 2019, in fact, resounds like a breach in space and suggests a new way of conceiving sculpture as a place of dream and social encounter, as it is perceived in the negative dimension of Matrix III, 2009. This becomes more evident than ever in the geometries of Clearing VII, 2019, wherein Gormley thinks of a continuous drawing in space through the use of molten aluminium, as if his gesture carries  out a subatomic force to reveal the muscular aspect of sculpture in relation to the body. In so doing, Gormley reflects a new sculptural construction that one perceives in the isolated figure of Subject II, 2019, composed of a latex structure, and depicting a man who turns his gaze down as if making a point for what it is  the human condition in the contemporary.

The exhibition takes a tun at the intersection of these axes where one can read the specificity of Gormley’s in a series of studies and drawings such as for Drawings I, and II, which gather his artistic within the time of four decades. The sign takes form and presence through within the sculptural forest of Concrete Works, 1990-1993, in which Gormley’s bodies invade the entire space of the gallery according to a dimensionality that looks at relationships, time and at space as if to lead us back to an era primordial of art, thought and technique, which we find in the conceptual installation Body and Fruit, 1991-1993. This alienating experience is completed by traversing the site of the site-specific installation Cave, 2019, in which his sculpture takes on an architectural scale by configuring a grotto that is marked by cuts and fissures that open to the gold leaf decorations of the museum rooms to suggest a new idea of shadows and light. At the exit of this metaphorical tunnel, Gormley dazzles us with the beauty of the installation, Host, 2019, which, once again, reflects upon the limits of interior/exterior and situates a new configuration for our natural habitat, or our primordial substratum of water, air, fire, and earth, which make us think about the need of assuming a sustainable approach to life at the present time. 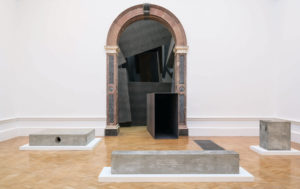 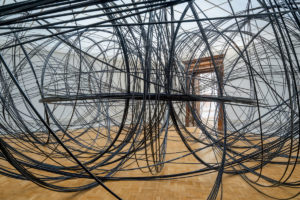 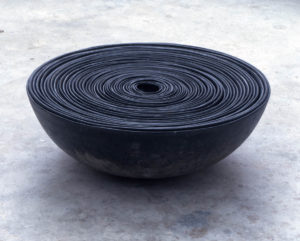 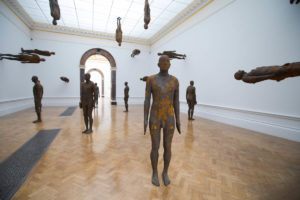