In today’s scenario the artist tries to create amazement and ecstasy, often also shock, disgust and even annoyance. The artist in every time represents the mirror of ‘our age’, the one we live in, thus becoming a witness of a process of evolution full of positivity or not. The fundamental points of contemporary art are then the vision, the watching, the observing; a contemporary that puts the viewer in front of something that he fails to understand because it is not immediate, because it seems to speak a coded and indecipherable language.

Horror vacui, the fear of emptiness – Amor Pleni, the Full Full, by Barbara Giummo, was born following a research that the artist finds in the ambivalence of opposites to which every meaning is a relative opposite and this allows not to remain on the same idea / position. The artist’s artistic research lays on informal abstraction and develops over the last year in the Horror vacui – Labyrinth series.

The fluidity of the acrylic allows a fast and automatic gesture, which allows her to make more pieces in a short time, thanks to the fast and not very precise drawing of the color. Colors never too far from each other. Full-bodied shades, with a contained color and minimalist design. Clear, fast and marked signs that trace a labyrinth within which the spectator can enter and then get lost or find himself.

“Non forms” that give life to signs that seem to repeat themselves infinitely and in a similar way. The signs of Barbara Giummo appear next to each other, repeated to infinity, a grid that seems to become a molecular structure, a cryptography of primordial signs that refers to a secret code: can we find the combination to access it? Will this order and disorder ever give us the opportunity to grasp the interiority of the artist or even find our own?

A labyrinth, made of lines and empty spaces, which in the case of the artist shows signs and colors, full and empty, that intertwine in the artist’s emotions and the spectator’s sensations. In ancient times the labyrinth symbolized the primordial chaos and the effort to impose order. Its spiral design resembles a coiled snake, the bowels, but also the meanders of the brain, a geometric design, more or less complex, consisting of various lines and lanes arranged in a spiral or a square that trace a path towards the center, in which the entrance coincides with the exit. A labyrinth, that of the artist, which can be read as a symbol of the journey within and beyond the limit of sign and color.

The exhibition Horror vacui – Amor Pleni, by Barbara Giummo and curated by Mery Scalisi, is designed to be staged at Gammazita – Cultural Association for the re-appropriation of common goods and self-organization from below, in Catania. An area of ​​exception that choice: a square with a local annex, which sees the Gammazita Association at the center of a social and cultural enterprise aimed at improving and redeveloping urban space. Gammazita does not present itself as a simple place for meeting or having a chat and a drink, but rather a place that lives with the heart, with the soul and with the brain. A square that from the afternoon until late evening is experienced by young people and not only, from Catania and not, and that gives an area of ​​freshness, novelty and change, few ingredients but that well dosed and mixed begin to produce succulent meals for the future Catania.

Horror vacui – Amor Pleni is then thought as a social experiment: an en plein air installation, around and within the square, which will be experienced by the passer-by or by those who want to stop at the bar for a drink and who will see the works of the artist to dialogue with the square and with the cultural context, a square full of people in the afternoon, empty in the evening hours when everyone returns home.

Barbara Giummo, born in 1990, lives in Augusta. She graduated and specialized at the Academy of Fine Arts in Catania in Painting, where she devoted herself to an expressive research where abstraction plays an essential role. The tool of color is undoubtedly the leitmotiv in her poetics, with references to geometries and a persistent use of overlapping layers of color or other materials. The use of figuration is absolutely random. In 2016 she participated in the exhibition “Moti Atemporali” at the Teatro Coppola-Teatro dei Cittadini in Catania, in the exhibition “Waiting for Wind” at the Bellini theater in Acireale and in the cultural event Gioeni art action, at the Gioeni park in Catania with the site-specific installation “Trame di Lana”.

Meeting with the artist

Mery Scalisi: Through what means and influence does your artistic research arrive today to formulate abstract works?
Barbara Giummo: Abstract works arise from a need to go beyond reality, to explore a dream dimension, to dig beyond what can be seen. I have never appreciated realistic painting and what it expresses.

S. Yours is an informal abstract art, typical of the art of Giuseppe Capogrossi. What other artist were your ideal masters?
G. I love Capogrossi very much but in addition to him of great inspiration to me is Willem de Kooning, with his shapes and ‘dirty’ painting. No doubt I add Emilio Vedova.

S. During the drawing up of the color (mostly acrylic), spread in a fast and almost imprecise manner, and the juxtaposition of signs, what does your will consist of towards the spectator?
G. I have no intention of arousing anything on the viewer. Mostly I work for myself, but I am happy when someone, and often happens, appreciates what I was going to give, that is, contrast speed.

S. The series of works Horror Vacui and Amor Pleni sees the labyrinth as the protagonist. A labyrinth that Kubrick himself in Shining identifies as a labyrinth of human minds, made up of anxieties and joys, which mix together in a vortex of emotions that lead the protagonist to go crazy. How do you think that contemporary (and above all abstract) art can help the viewers to recover and find themselves again?
G. In today’s world I think that abstract art is the only useful tool that can allow us to find ourselves again. In a certain sense the seamless shapes are capable of opening doors that are not impactful, but which remain in the visual memory. My work is inspired by the spots of Rorschach, and as such them wants to be the incipit of new thoughts that naturalistic painting could not give, given that what is seen is what it is. What is not understood, on the other hand, leads to know something other than itself. 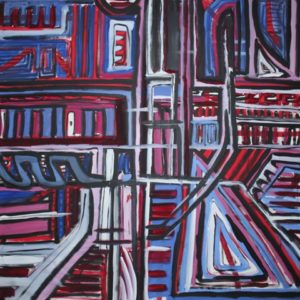 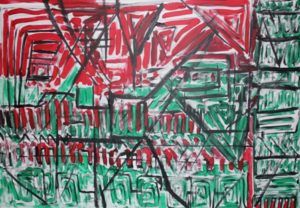 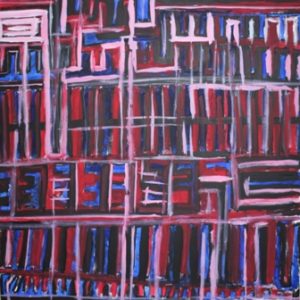 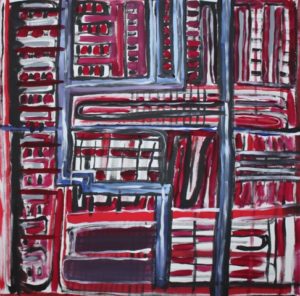