The opening of the first Cente.. 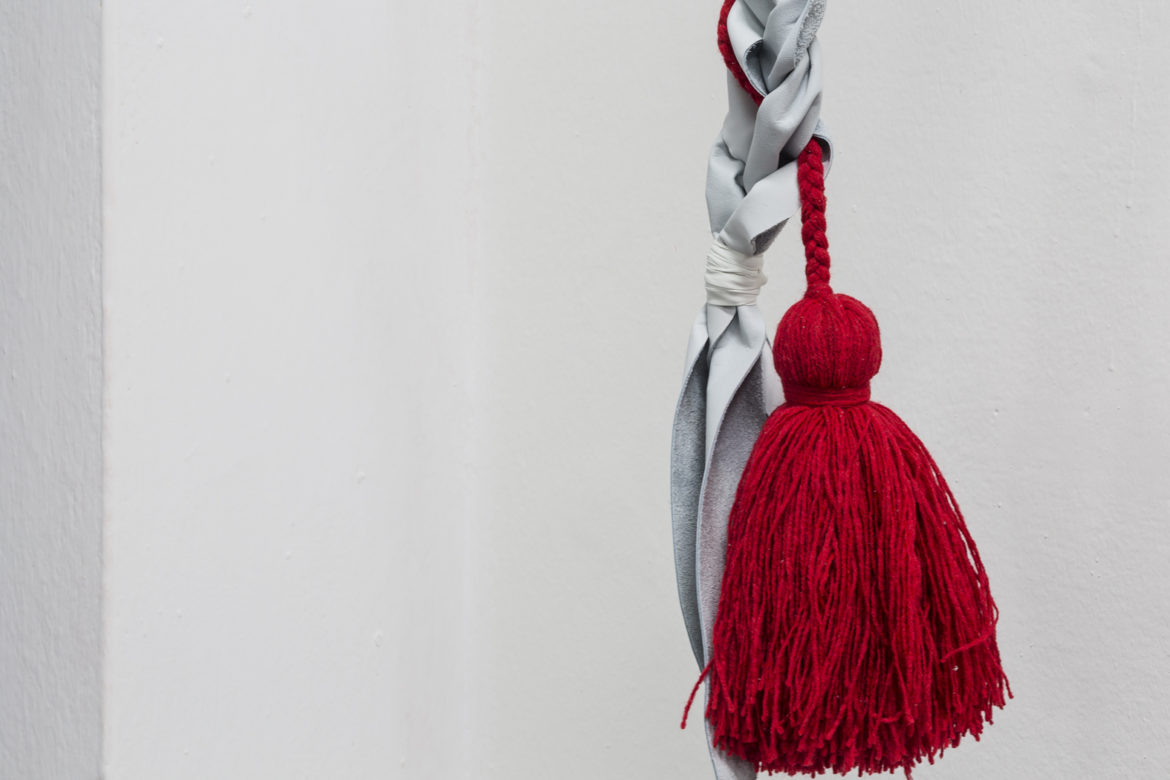 Apparatus 22, artistic collective founded in Bucharest in 2011 by the current members Erika Olea, Maria Farcas and Dragos Olea together with Ioana Nemes (1979-2011), returns to GALLLERIAPIÙ with a new extreme reflection on the body, this time dematerialized and projected into a distant future, made plausible by a radical imagination. While the previous series Several Laws. The Elastic Test explored the body in crisis, torn by instincts of social control and self-expression, the current exhibition hypothesizes a parallel universe in which the body, and perhaps even consciousness, elaborate genetically modified survival devices to adapt to what could happen in the next millennium. To go very far away in time means to gain a greater critical distance from the present and to detect the seeds of change imagining its amplified developments through a constructive exercise of poetry. Arrangements & Haze is therefore a space-time capsule, an immersive thought that becomes environment and incubator of entities freely derived from what we consider nowadays a body, a coherent system in which logic and utopia shape new forms of individualism and constraint.

Once again the investigation of the collective starts from the skin, our largest organ, the protective and osmotic interface that separates us from the outside world, the containment sheath that ensures the order and functioning of the innards. But in this case the skin contains a mental body made of words, it is an elementary or hyper-technological organism that a mysterious artificial intelligence has marked with a coded message. A multiple body made up of eight pieces of stretched, framed and tattooed leather redraws the gallery space with eight lapidary poems encircling the visitor in a real mental siege.

What could be the perfect assembly to achieve pleasure? Will it be possible to digitize wisdom and pain? If progress will allow us to dislocate the future and the past, what degree of reality will be assigned to the present? Can the body be a material like any other to be remodeled in something absolutely new? The search for functionality will annihilate beauty? These are just some of the burning questions raised by the texts that the tabula rasa of the white background emphasizes rather than neutralizing. To define the series the Apparatus have coined the term hardcore minimalism, which clearly highlights the interpenetration of sensuality, formal rigor, imaginative excess and scientific visionary on which the paradox of these quintessential bodies still able to evoke their intangible viscera is based. The work is completed in the mental projection of the spectator who introjects the words, according to the artists better if read aloud, to imagine a body of artificial sex with a human soul, an organism resistant to interstellar accidents caged in its own immortal efficiency, a brain-processor able to understand what we cannot even imagine and then to forget it effortlessly. But also the rented tenderness, the synthetic knowledge controlled by the great corporations, the automation that replaces the thought, the persuasive voice of the supreme power that leads to obedience, artificial ethics, the alienation of work. The fantasy passes through the nightmare without interruption because thinking about the future is exciting and frightening at the same time, especially if in the reality in which we live we begin to recognize the signs of an unstoppable race towards the white noise.

From the verbal manipulation we pass to the handling of materials: the second part of the exhibition, the malleable heart of this imaginary macro-organism, consists of the fluxus-like prototypes, a series of experimental objects that explore the hidden knowledge in the body through physical actions generated by the hybridization of rationality, logic and science with ritual, random and magical practices. Here too the common thread is the skin, the same whitened leather of the previous tattoed tableau, now no longer constrained by the tension of the frame and left free to settle with soft negligence on other imperfect shapes. First of all, a genealogy of oversized and unstable crutches – a paradigmatic example of an unusable and therefore self-sufficient prosthesis – that become quantum machines and amulets with superhuman powers to oppose the exploitation of the new body. Or a Samples Bank, a horizontal totemic archive of possibilities that are still unexpressed but already codified and predicted by omniscient algorithms or the strange life of elastic forms in The form is pregnant, a triptych of biomorphic structures born to tickle a compulsive tactile pleasure. Even more extreme, the Hand Tools for Molding deep convictions suggest how the incorporation (or inoculation) of a thought requires adaptation and suffering and invite us to reflect on how the limitations imposed on our bodies affect the perception of things. From the rough physicality of these instruments we move to the opposite pole, the “boxless” lightbox Those flames are burning, a mixed digital and analogue image on backlit fabric that unveiling its internal structure appears as an almost magical presence.

The mission of these objects, which self-declare their descent from the pure experimentations of the Fluxus artists of the Sixties, is to explore the consequences of a process free from any function, to capture the hidden energy in the chaos of the irrational to suggest to science freer operative modalities and to hypothesize a tangible form for each temporary stage of creative thinking. Moreover, their intentionally clumsy and incomplete appearance puts on stage the inner labor of an empathic machine that tries to understand what it lacks to be human by extending its appendices into the void to experience the external world by smelling and touching it. The embryonic sensuality of the prosthesis is the first step towards the design autonomy of a gear that wants to expand to rebel against the establishment, it is the symptom of a radical change that is not yet given to us if it announces a new ally or a threat.

In the penumbra something grows. 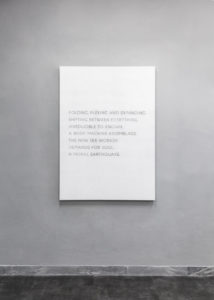 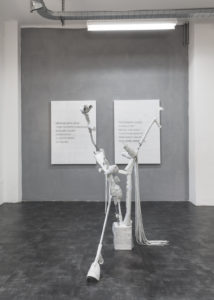 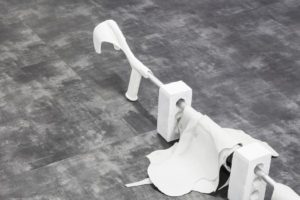