Houda Bakkali. The colors of i..

At the Royal Academy, London, the exhibition Life Death Rebirth suggests an anachronistic dialogue between the artworks by Michelangelo and Bill Viola, whereby life and experience intertwines through the intensity of its revelations beyond time and history. Curated by Martin Clayton, Kira Perov, Andrea Tarsia and Anna Testar, the exhibition puts on stage the power of Michelangelo’s sculptural works and drawings in comparison with the intensity of Viola’s immersive video-installations through the development of a path which culminates in a cathartic experience for the body foregrounding the invisible, recalling, as we read in the texts in the catalogue, an idea of stone and light.

We are introduced to the exhibition by Bill Viola’s video-installation, The Messenger, 1996, wherein the body of a human figure emerges onto the surface of an abyss which immerses us into the deep time of memory through the purity of elements such as water and light. Focusing on the expression of the figure’s face, Bill Viola suggests to us the dimension to approach the exhibition, speaking directly to the movements of the soul in their becoming forms of an experience. It is through these movements of affection that we enter the dark spaces of the exhibition, such as for the video installations Nantes Tryptych, 1992, which speaks to us about life, birth and death, through two female figures which are vigils of a central figure that is immersed in the emptiness of a virtual abyss. The figures of Bill Viola lend themselves to a comparison with a series of drawings by Michelangelo that look to female figures such as The Virgin and Child, 1540-1545, The Virgin, the Child and St. John, 1532, and The Lamentation on the Dead Christ , 1540, where we can see the traces of a figurative research that seeks introspection and dramatic tension, culminating in the Tondo Taddei, 1504-1505, permanently exhibited at the collection at the Royal Academy.

The journey takes a regenerative and introspective turn when by crossing the immersive spaces of the video-installation The Reflecting Pool, 1977-1979, Bill Viola takes us through the different facets of thought through the image of a man about to plunge into a lake source against the backdrop of an evergreen forest. After the reflective moment, the abstract dimension of Slowly Turning Narratives, 1992, explores the power of language and light, accompanying us to the interiors of the installation The Sleep of Reason, 1988, in which the artist seems to search for light from vivid and vibrant aspects to become rarefied and crepuscular.

The diptych Man Searching for Immortality / Woman Searching for Eternity, 2013, confronts us with the human condition, focusing on the pose and the gesture of two figures in search of the limit of the body and the knowledge of the self, revisiting classical iconography which is found in Michelangelo’s sanguine drawings, as in mythological, battle, and genre scenes, up to the nude studies conceived for The Last Judgment, 1534, wherein a series of angelic and diabolical figures fight the forces of good and evil, destiny and fortune. Following this tacit narration, Bill Viola reminds us of the value of thought and action such as for the installation The Veiling, 1995, in which the artist stages a repeated sequence of faces, reflected on the surface of fabric screens, and crossed by two symmetrical projections of light, up to lead us to the unconscious experience of The Dreamers, 2013.

In the large central hall of the Royal Academy, the apotheosis of the video-installation complex seems to unfold, Five Angels for the Millennium, 2001, wherein the figures of Departing Angel, Birth Angel, Fire Angel, Ascending Angel, Creation Angel, 2001, are protagonist of a five acts human tragedy, which sees man constantly searching for eternity, crossing landscapes of light, fire, water, air, and beauty. At the end of the path, we are witnessing a final dialogue between a series of drawings by Michelangelo on the theme of the Crucifixion and a series of works by Viola including the diptych Surrenders, 2001, anticipating the video installation Tristan’s Ascension (The Sound of a Mountain Under a Waterfall), 2005, which by rethinking the dualism between body and spirit, concludes the exhibition. 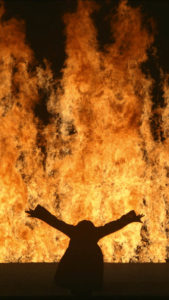 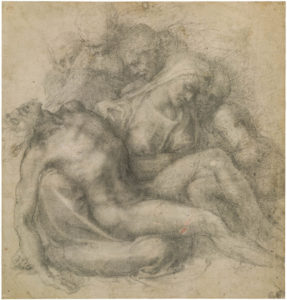 Michelangelo Buonarroti, The Lamentation over the Dead Christ, c. 1540 Black chalk, 28.1 x 26.8 cm
The British Museum, London. Exchanged with Colnaghi, 1896 © The Trustees of the British Museum