Carsten Höller (1961, Brussels), graduate in Agronomy in Kiel in 1993, applies the scientific approach acquired during university studies to artistic production, aimed at plumbing the nature of human relationships with expressive tools that generate disorientation and through contexts that problematize usual forms of perception through carefully controlled participation experiences. Artist among the most interesting on the international scene since the nineties, he places his works on the border between psyche and biology, ranging from a thorough research on emotions to the investigation of natural predispositions such as the instinct to procreation and fear. Feelings like love, affectivity and joy, when considered as essential strategies for a good reproduction of the human genetic heritage, reduce human beings to simple animal creatures among other animals.

Developing installations and interactive sculptures, Höller creates structures able to induce the public, often in a playful way, to states of excitement, alteration, doubt and confusion, using it as a subject of perceptive and psychological experiments. In his poetics, which involves plants, animals and people in the same way, art is a tool to carry out experiments that mix the symbolic level with the real, revealing his ability to delve and subvert the cultural and ethical categories that our society gives for certain. The disturbing fascination of his works, which are metaphorical and environmental traps, resides in the recurrent manipulation of ancestral forces, such as the idea of ​​security, childish curiosity, pleasure and joy as physical states, the game, the dynamic relationship between doubt and certainty.

Mushroom Mathematics, the new exhibition by Carsten Höller currently underway at the Galleria Massimodecarlo in Palazzo Belgioioso, presents a preview of a series of sculptures and paintings that transform the exhibition into a machine of doubt, made even more surprising by the combination of works that seem at first glance, contrast two aesthetic codes of diametrically opposite sign.

On the one hand we find a large display case that houses 48 replicas of mushrooms in various colors, sizes and shapes, each consisting of a half Amanita muscaria and a half chosen from various other species of mushrooms, whose presence is amplified in the main hall with the lush chemical undergrowth made up of the sculptures of the Giant Triple Mushrooms series, made up of one half Amanita muscaria and two quarters of other mushrooms. On the other, the installation is surrounded by a series of round, square and rhomboidal paintings of the same dimensions, made in different colors: the Division Paintings. Their abstract perfection is based on a simple principle of mathematical partition: a line painted in the center of the canvas that divides the surface into two equal parts, a section of which is subsequently divided into two new halves and, following this geometric pattern, the canvas it is repeatedly divided up to evoke an infinite potential but at the same time tangible.

In both cases the artist, operating a systematic partition of the elements with which he is operating – mushrooms and canvases – pretends symmetries and specularity where instead there is a vacuum of logic and a surgical arbitrariness that sink into the inscrutable unconscious of a rationality that, despite the efforts to implement the logical structures that support it, comes to clash with its own limits. The doubt inevitably arrives, which Höller tries to provoke in his most different aesthetic declensions: doubt in his poetics represents the contradiction of any truth, whose purpose is to implement its meaning and to make the beauty explode. Beauty that you can not help but admire in the mysterious Amanites reproduced by the sculptures, for the artist icons of uncertainty, ambiguity and symbol (like paintings) of the infinite tension towards research: they not only open our mind to unpredictable effects, but they do it by living and reproducing in ways that are still incomprehensible. 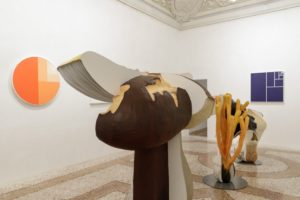 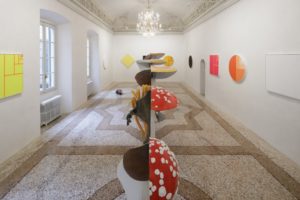 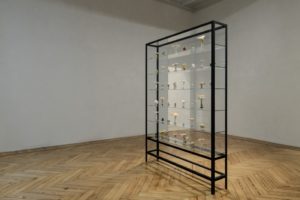