(Nothing but) Flowers. Intervi..

Cecilia Alemani and her Projects and Frieze Sounds

Cecilia Alemani and her Projects and Frieze Sounds 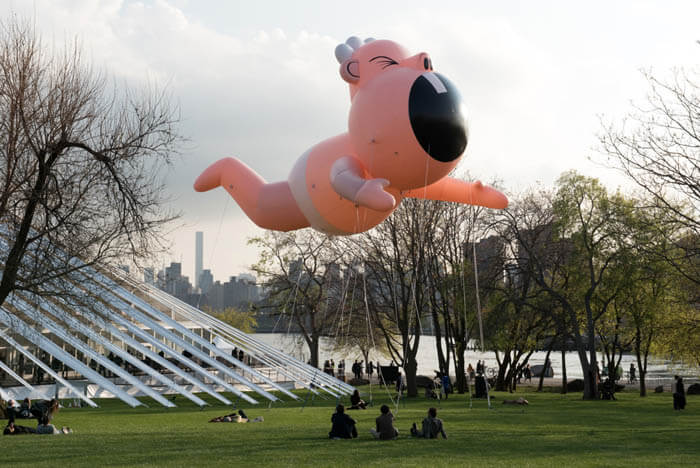 During the latest edition of Frieze Art Fair New York (the fifth in the US) the adverse weather conditions of the preview had not limited the participation of the guests, thanks to the ongoing shuttle and ferry service boats that plied from Manatthan center at Randall’s Island Park far enough. To liven up the atmosphere, within the vast shed, surely contributed the nonprofit section Projects and Frieze Sounds, curated, since 2012, by Italian Cecilia Alemani: young and dynamic lady of the art who, after studying philosophy and aesthetic in Milan, graduating in Paris and in a contemporary art course at the Tate Modern in London, in 2003 has come to New York for an MA in Curatorial Studies at Bard College, and had the opportunity to enrich her curriculum as indpendent curator with skilling initiatives, never moved away.
In 2008 she was chosen to head the New York space X Initiative; subsequently organized exhibitions for MoMA PS1 and for the Turbine Hall of the Tate in London. Now she is chief curator of High Line Art, a former elevated railway, redeveloped as a recreational and cultural public space that runs through the area of Chelsea. Last April she was appointed art director of the Italian Pavilion of the Venice Visual Arts Biennale 2017, with a project that has had the full support of the international jury. For the moment there are no advances on the project, but her great skills will probably lead her to a new and unexpected format. With the activity that she is carrying out in New York, she showed her will to focus above all the “Circumstances” in which some artists express, mostly young and not really in the art system, while not neglecting transgressive phenomena of historical derivation. And the guest list at Frieze Projects 2016 reveals which territories she prefers to explore.
These are the visual operators she presented with special installation and three-dimensional works, performances, audioworks and even “illegal actions”: Giorgio Andreotta Calò (Venice-Amsterdam), GCC (the collective of the Arabian Gulf), Alex da Corte (Philadelphia), Anthea Hamilton (London), David Horvitz (Los Angeles), Liz Magic Laser (New York), Eduardo Navarro (Buenos Aires), Heather Phillipson (London) and our Maurizio Cattelan, who deserves a special mention. On request of Alemani he has revived, for the duration of the Fair, his first show in the States at Daniel Newburg Gallery in Soho, who wanted to close the gallery with “a young emerging artist from Italy”. It was July 2, 1994. The artist had planned to destroy a wall of the gallery to step into the adjacent David Zwirner, but as the latter refused to do it he was forced to change the project and ‘exhibited’ a living donkey (which represented his inadequacy to realize the ideas) ‘installed’ in the empty space with a stylish crystal chandelier hanging from the ceiling (emblem of the ‘sophistication’ of the art world). The exhibition lasted only a few hours and was seen by few, unlike at Frieze, where formed long lines. Right when me and my husband were looking for it, we jumped in Cecilia Alemani and Massimiliano Gioni, who have accompanied us where Gabriel (for close Gabe) – unaware of its role as the main attraction of the Fair – remained impassive to the photographers. By the guardian, who treated him like a real performer, we learned that, in addition to being have hay and water every two hours, enjoyed a break in the garden, munching the fresh grass of the meadow, and after the closing time was brought back in its stable, as when he had made the appearance in La Bohème and Le nozze di Figaro at the Metropolitan Opera House.
Undoubtedly the original proposals of Alemani have made the Fair less predictable, lightening its traditional mercantile function, although there were attractive things for collectors. In addition to Cattelan’s installation, among the most involving proposals of the Projects sector there was the large inflatable baby of Alex da Corte, floating in the Green Park, near the north entrance, inspired by a parade float of Batman and to a work of Philippe Parreno referring to the same film. Inside, however, there were: the multimedia installation in different versions (positioned at several points) of artist and poet Heather Phillipson, who imagined the fair like a huge human spinal cord, where sculptural elements, made up of parts of dog bodies, were interacting with video, audio and writings, articulated in a sectioned system forms; the Kar-a-Sutra – stylish machine designed by Mario Bellini, already exhibited at MoMA in
New York in an exhibition on Italian design – employed by Anthea Hamilton as a cockpit for a performer with a masked white face, in autistic mutants poses, that attracted the viewer; the actions of a group of five girls – carefully ‘orientated’ by Eduardo Navarro – who ‘wore’ circular mirrors that capture the changing aspects of the sky or the summit in artificial places. During breaks the materials used were going to form a static, sequential installation. 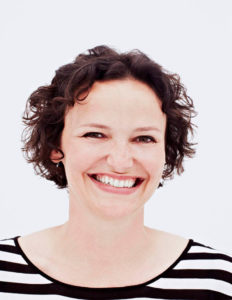 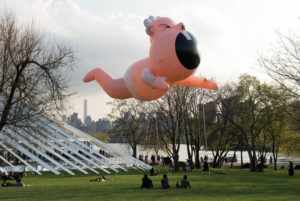 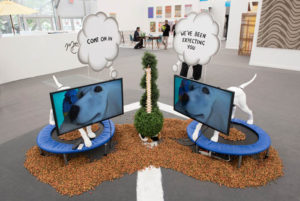