The fragment as a tool. Maria ..

For twenty years Christian Boltanski (Paris, 1944) has a privileged relationship with Bologna: in 1997 the city hosted his first great Italian solo show where the artwork Les Regards was presented, inspired by photographs of fugitives partisans that relatives placed In a corner of Piazza Nettuno after Liberation, while since 2007 in Ustica Memory Museum the remains of the DC9 exploded in flight is accompanied by a permanent installation commemorating the 81 victims of the plane crash with a constellation of black mirrors and intermittent lights that transform the exhibition venue into a shrine layperson.

Boltanski, who was born in the wake of the Second World War by a Ukrainian Jewish father and a Catholic family mother, has always focused his research on universal issues such as the elaboration of the tragedy of history, the fragility of individual and collective memory, the inevitability of fate, the power of the unconscious, the sense of loss and absence generated by death and the transience of human life. Convinced that art should still play a role as a civilian witness in our society and that the conservation and understanding of the past are indispensable to build the future, during his long career he has elaborated a multifaceted multimedia language based on meticulous collection of traces of what has been lost and on their subsequent assembly in works that combine evocative power and rare delicacy. From the Sixties to the present, the questions the artist poses himself are always the same, but the way to face and raise them is changed; his new articulated exhibition project involving various places in Bologna traces the salient stages of his creative production (from the 80’s to the maturity), crossing all of his key languages ​​in successful symbiosis with the urban space.

The fulcrum of everything is an anthological exhibition (again, the largest organized in Italy) in MAMbo Museum, which the artist understands as an impressive cathedral of memory wrapped in the shadows where his works, illuminated by faint light sources, dive the spectator into a dense atmosphere of suggestions, suppositions, whisperings, and fleeting appearances. The thread of the exhibition is a sort of intimate and existential biography of the artist who, in his old age, questions the meaning of his own life and the concept of time as an inexorable approach to a term endangering his struggle against the inevitability of oblivion. If the life of each of us is a limbo suspended between the deeply human wounds of the present and the vulnerability of a memory entrusted to posterity, the spectator is called to be an active and empathic subject of a narrative that through the symbolic value of common and ephemeral objects wants to reactivate the core value of memory.

The route begins with the Coeur installation where the show anteroom becomes a resonant chord of Boltanski’s amplified heartbeat recording, whose rhythm is followed by the intermittence of a bulb. This vital beat ideally blows the thousands of heartbeat recorded all over the world that the artist has stored on the island of Teshima in Japan. The idea of ​​preserving uniqueness in the multitude returns in the walls covered by black mirrors where the visitor can see the multiplied and fragmented reflection of his own image that stimulates him to identify himself with the video Entre temps in which the artist’s face changes in the passage from childhood to adulthood. After crossing the curtain on which the video is projected the visitor is accessed to the main exhibition space, transformed into a floating labyrinth of transparent textiles hanging from steel wires with embossed magnified images of anonymous looks and faces drawn from the immense photo archive collected over the years by Boltanski. Suspended between life and death in a liquid fluctuation, these diaphanous presences hold the evanescent aura of a blurred collectivity which is delivered to eternity by its photographic trace.

In the middle of the room we can see Volver, an imposing pyramidal structure that touches the ceiling realized with an accumulation of metallic isothermal blankets: if from a distance the mountain emerges as a glittering beauty and luxury mirage, close-range view incarnates the suffering of migrants by recalling the dramatic pictures of the first aid given to those who, devoid of individuality and possessions, survive the shipwreck of the journey of hope. Photography as a mean of investigation and as an identification tool that allows to intertwine individual and collective memory returns to a series of works (Autel Lycée Chases, The Great Walls of Suisses Mort, Monuments, Veroniques) that combine photographic images with common objects, such as electric bulbs, tin or light boxes. Placed within niches made in the side showrooms to recall the chapels dedicated to the worship of the saints, these sculptures are offered as altars and antiretorical monuments that restore the dignity of the memory to hundreds of anonymous and ordinary people swallowed by the course of time and history.

The subtle polyphonic visibility that lays the visitor during the visit / crossing of the exhibition flows into a calm and candid place that ideally ends the path: in the last hall, marked by the luminous neon sign Arrivee, the Animitas (blanc) video documents a moving installation made up of hundreds of metal blades to which winding bells are tied to the wind planted in a snow-covered field on the island of Orleans in Quebec. The work , exposed to atmospheric agents and devoted to natural destruction like most of Boltanski’s environmental work, reproduces on Earth the celestial map of the day of his birth transfiguring it into a musical score that seems to entrust to a cosmic and infinite time the voice of the little souls that the artist has lovingly listened to throughout his life. 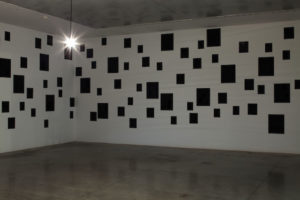 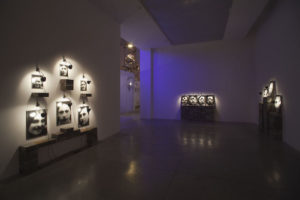 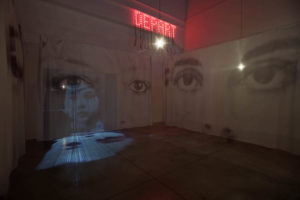