In conversation with Ronit Ker..

Someone could imagine that a small country like Luxembourg, although home to countless EU institutions (European Parliament, European Council, Council of the European Union, European Commission, Court of Justice of the European Union – CJEU, European Central Bank – ECB, European Court of Auditors, European External Action Service – EEAS), could become a reference point for contemporary art? Well, the small town of Esch-sur-Alzette (with less than 36,000 inhabitants), once the capital of the Terres Rouges where iron was mined, started a restoration project in 2020 and has already been completed. I am talking about a building, originally a furniture store, which after two years of renovation has become the Konschthal Esch, Espace d’art contemporain, a 2400 square meters space, divided over four levels. This building is located between the district called Brill and that of Grenz; the French border is less than a kilometer away (in German Grenze means limit, border, and in Luxembourg the three official languages ​​are Luxembourgish, French and German). The remains of the steel industry near the Konschthal building, the history of the city and the restoration work itself (which wanted to keep traces of the historical memory of the previous architecture, putting the load-bearing structures in full view) make it far away from the classic white cube, and full of a strong emotional charge, a bit like the Palais de Tokyo in Paris.

At the moment, the structure hosts three exhibitions: until 11 December 2022: “NEW MINETT” with works by Cie Eddi van Tsui, Justine Blau, Ezio D’Agostino, Raphaël Patout, Julie Schroell, Bénédicte Vallet, Désirée Wickler; until 15 January 2023 “People and Places” by Pasha Rafiy and “Rejected” by Clegg & Guttmann. We focus on the latter, to deepen its contents.

Michael Clegg and Yair Martin Guttmann were born in 1957, the first in Dublin and the second in Jerusalem. They met, in New York, at the School of Visual Arts, in the class of Joseph Kosuth, and in 1980 they started working as an artistic duo. Talking about their work as a simple taking possession of reality through the use of photography is really reductive, since their work ranges from video, to sculpture, to installation. Of course, they are best known for their flawless photographs, especially in the genre of portrait, still life and landscape. Moreover, their portraits are divided into three groups: the fictitious ones, where the play is set up, because models are presented as simulators of power relations within the art system; then there are those commissioned, where the confrontation with the client, with his requests and with the proposed solution, always corresponds to a relational and dialogic logic; those of collaboration where every decision is taken in common agreement between the photographed subject and the two authors. For example, in the photographic work known as “The Board”, where senior executives of Deutsche Bank are immortalized in an impeccable way, we want to symbolize the power of money in the years of global and computerized finance. But a not secondary point must be added: Clegg & Guttmann are not simple and silent performers, they are not subject to directives that fall from the other: they claim to establish every element of the scenic backdrops as well as the pose of every single person, lighting and even the details of the clothes, making sure they can then exhibit the work at their discretion, even if the client does not like the result and refuses to purchase the work. Somehow a test of strength that demonstrates the weight of this authors. At this point we can safely say that the commissioned portraits are actually divided into two sub-categories, those accepted and those rejected. “Rejected”, the current exhibition at Konstschthal Esch, is part of this second sub-category.

The characteristics of these photos are easily schematized: the reference to the historical portrait (think of the celebratory typologies of Flemish, Dutch or Mannerist portraiture) returns to arrogance, the strong lateral lighting is another stylistic figure to which the poses (which indicate contempt, superiority, institutional rank or simply the smell of money and authority), the gestures and accessories that characterize the role of each individual. Do you remember the painting “The Ambassadors” by Hans Holbein the Younger, at the National Gallery in London? Apart from the memento mori, underlined by the skull in anamorphosis, the poses of the two figures and the “articles” that serve as a corollary are there to indicate the authority of the two characters and their role. All in a 207 x 210 cm panel painting, dated 1533. And this is also one of the reasons why the photos by Clegg & Guttmann are oversized: comparison is inevitable. The size for the family album is not enough, nor the minimum size of a conceptual photo: here we are talking about prowess, might, celebration, consecration. And the considerable dimensions have a weight of no small importance.

A question arises spontaneously: why have some powerful people allowed themselves not to recognize themselves in the photographic shots of these two brilliant photographers and to refuse the work done? A possible answer is: the celebratory portrait does not always really incense the person portrayed, it can often underline defects or show the negative side of the “face”. Better to live in the shadows, perhaps… 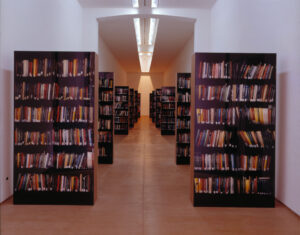 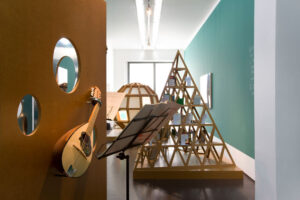 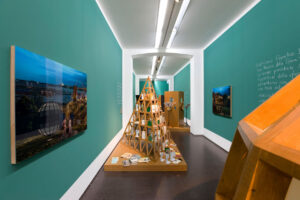 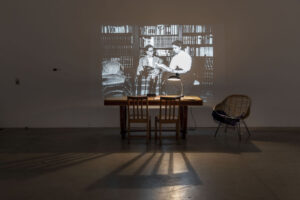 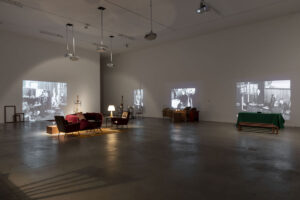