The chaotic dissemination that wants to undermine the linearity of history seems to be a specific trait of present times: the homogeneous flow of time is purified under the guise of the iconic dialectical act that, echoing Benjamin, reveals itself in the lightning image that illuminates past and future starting from the urgencies of the present. The dialectical image becomes a synthesis of the multiple, which doesn’t eliminate contradictions, but rather cultivates them for their creative potential.

The exhibition Complementari, by Veronica Montanino, conceived for Andrea Ingenito Gallery in Milan and curated by Simona Caramia e Ingenito himself, is a reflection on the multiplicity states of existence, starting from duality. In the artwork called Magenta, a wall installation whose individual pieces can be also appreciated separately, this duality seems to underline the germination and the evolution of the states of mind and the states of nature, reaching the synthetic hardness typical of the creative and combinatorial activity of the artist herself.

Artworks’ strong three-dimensionality and bright colors, pushing the viewer to a powerful situation of closeness, are in dialogue with the delicacy and the sensual generosity of the artist’s hand, while the figurative insert are about the Huly clan, traditionally engaged in ancient and colorful rituals. Duality is also about the red-green dicothomy. Speaking about red, it seems to me that it is used in order to recover the most ancient anthropological meanings: life and death, teleological perspectives and functionless ones, fruitfulness and self-destructive impulse can be equally implicated. On the other hand, speaking about green, it has a regenerative function: it’s the ideal base for the ectoplasmatic growth of Trapezio, another Montanino’s artwork.

Also called Circus of Nature, Trapezio dialogues with the tradition of the baroque allegory: fluctuating and metamorphic, the artwork’s phytomorphis breaks with the eschatological perspective of classicism to explore the decadent immanence of the world. Fragmentations are brought to synthesis, while the false appearance of totality is surrendering to the complex multiciplicity of human life. Being a fragile and hypnotic swing, Trapezio implies the oscillatory and unstable possibilities of Warburg’s Pathosformel: it’s a psychic work that conveys the pathos of the scene, the announcement of a primordial complication given through coexistence and cohabitation.

Besides, in his latest work, the iconic atlas Mnemosyne, Aby Warburg wanted to re-name the seventy-nine panel as true “salad of images”. In the apparent lack of sense of that juxtaposition of iconic acts – one could say the triumph of the intertext – was the whole heuristic implications of his Pathosformel; there was a scandal that broke with the quiet grateness of Winckelmann aesthetics: the moved ornament of Pipilotti Rist’s Smashing Girl could become the heir of the Marian garments of Niccolò dell’Arca; or that a maenad flooded by the fury of rituality could transform into a fifteen-century, desperate, Mary Magdalene.

Here, in Milan, the sweet and unstable ornamental rhythm of Montanino’s works speak about the silent and unstoppable course of the germinating power of art, which is about contamination and hybridism. The exhibition is accompanied by a catalogue. 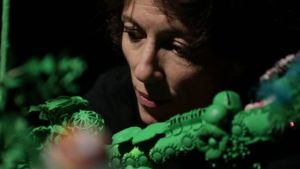 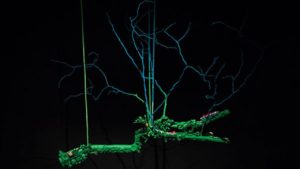 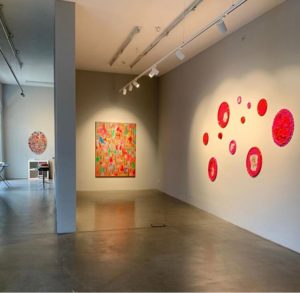