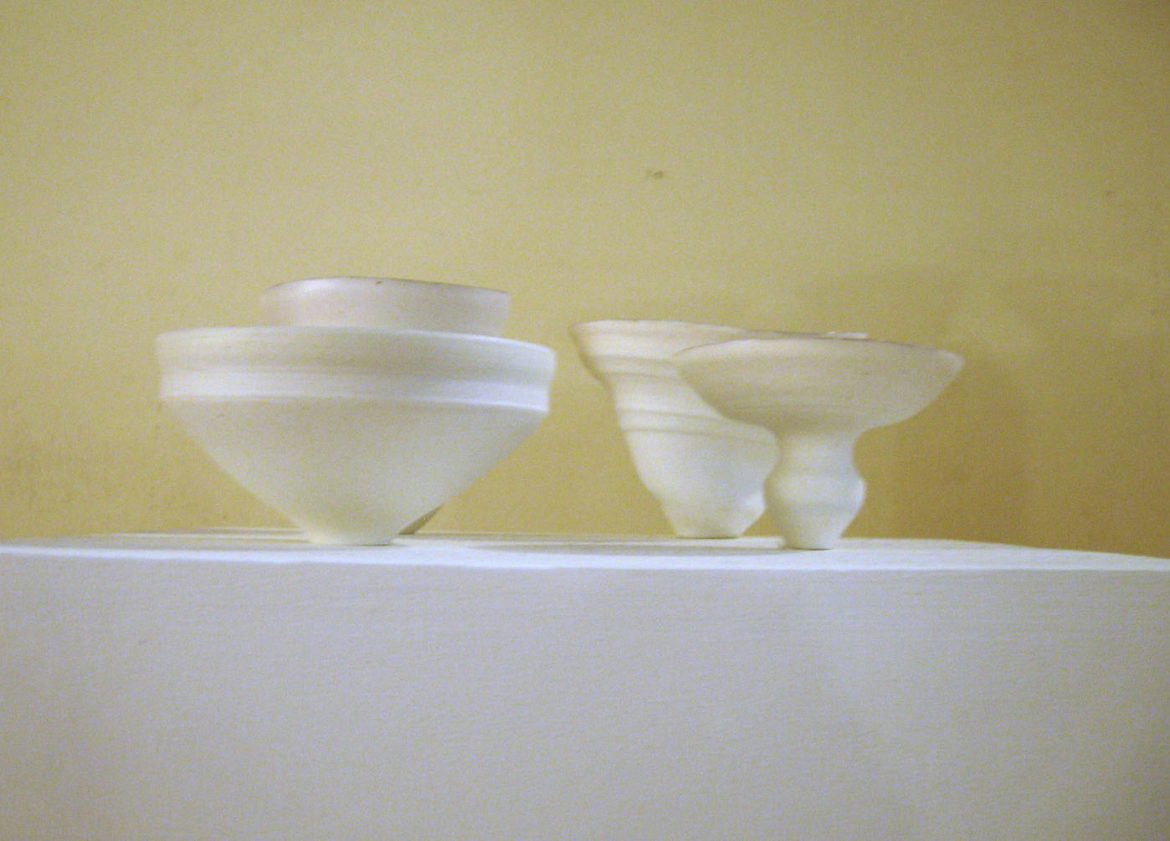 Sometimes the surprises manifest themselves in the most unexpected places and contemporary art, which in Italy is struggling to find adequate spaces for development and diffusion, finds acceptance in territories apparently peripheral to the art system, which become propulsive centers of artistic research and critical debate thanks to the synergy of passionate and competent promoters. A virtuous example of this kind of convergence is the exhibition Contemporary ceramics, new masters in the Castle of Levizzano Rangone which brings together 36 artists of different generations and creative backgrounds, invited to experiment with ceramics and terracotta, ancient materials whose tradition is still today strongly rooted in the surroundings of Modena. The aim of the exhibition is to present a sensitive survey of the most up-to-date outcomes of contemporary creativity which, by choice or challenge, has decided to deal with this flexible and fascinating medium, perpetrating its vitality with incursions and encroachments in the field of art and design. The works live in four rooms of the noble floor of the castle and establish an engaging dialogue with the terracotta floors of the interior and the rough walls made of bricks and stone interweaving their history with new narrative hypotheses.

To welcome visitors at the entrance, guarded in the outer corridor by a warior matrix by Matteo Lucca, we find a pair of busts depicting the brothers Isabella and Alfonso d’Este made at the beginning of the last century by Manifattura Minghetti, illustrious epigones of Renaissance majolica that made Italian artisans sought after in the courts of all of Europe. The two figures in the exhibition condense the craftsmanship of the past centuries that, just before being outclassed by the industrial chain in the production of luxury furnishings, entrusted its survival to the artists, who from the second half of the twentieth century have re-read techniques and materials in aesthetic and conceptual terms, freeing objects from the original intended use to enrich them with postmodern charms.

Some of the works on display play at various levels with tradition, such as Amaaro’s sculpture, a monochrome composition halfway between a table triumph and a vanitas, or Cecilia Coppola’s carriage, which recalls in a fairy-tale key motifs and styles from the small rococo sculptures emphasizing its lightness with a smiling kitsch intonation. The theme of the banquet, which was in the past an occasion for displaying the preciousness of the domestic furnishings in the noble residences, echoes in Fabrizio Bussotti’s herring, a raku ceramic pop dish set on a real polenta slice on a Tuscan dish, in the very elegant white tray by Li Zhuwei, a metamorphic object about to create a mysterious coral reef or in the oil-painted ceramic table by Simone Fazio, which seems to depict a creepy face of a blinded Medusa.

A series of interpretations of the classic shape of the vase, which has always been an object par excellence connected to the art of ceramics, could not be missing: it goes from the oriental-inspired elegance of the monumental piece by Giuliano Della Casa to the head-vessel by Andrea Capucci conceived as a sculpture-ecosystem, to the very thin cups by Elysia Athanatos that blend material and chromatic refinements to the essentiality of a self-supporting shape generated by a vortex movement. Alberto Gianfreda deconstructs the identity of the Chinese vase by returning it as a mobile aggregate of shards connected by metal chains to question the resistance of the icons and the irreducibility of the sculptural practice, while Gaetano Di Gregorio transforms a large vase, once again a Chinese production, in a voyeuristic visualization device that overturns the usual aesthetic relationship inside-outside, emphasizing its function as a container of desire.

Some artists are fascinated by the camouflage possibilities of the ceramic material, such as Giorgio Di Palma who uses it to reproduce retro-style pleonastic objects, Federica Poletti who reflecs on the transience of the human body by immortalizing its anatomical vestiges or Bertozzi & Casoni, who found their distinguishing mark at the beginning of their career in hyper-realistic virtuosity understood as a contemplation of the present that investigates the disturbing beauty of the waste of contemporary society. Matteo Manfrini makes use of the imitative possibilities of ceramic paste to create an illusory familiarity with anthropomorphic and figurative subjects that trap the viewer in enigmatic conceptual mise en abyme whose meaning is entrusted to the symbolic and perceptive suggestions of the materials, while the Hackatao duo forces the versatility of the medium with super-flat acrylic surfaces that hide the natural origin of the materials to visually homologate them to the mass production materials.

Other authors explore the autonomous expressive possibilities of ceramics and enamels that cover the surface, like Giulia Bonora, who exhibits abstract landscapes of tubular shapes that can be unambiguously balanced between organic growth and serial multiplication, in whose cavities hide jewels and secret spatial tensions. Caterina Mancuso investigates the compositional variations of simple centripetal shapes animated by shimmering chromatic stratifications, while Daniele Gagliardi realizes poetic assemblies of inertial materials in precarious equilibrium in which small ceramic fragments merge in the midst of other melancholy everyday wrecks rendered unrecognizable by consumption. 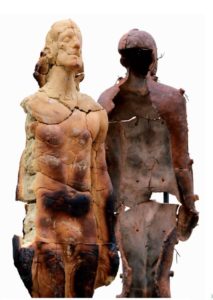 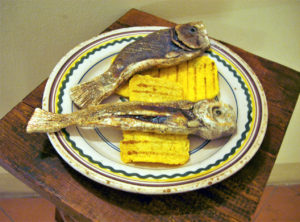 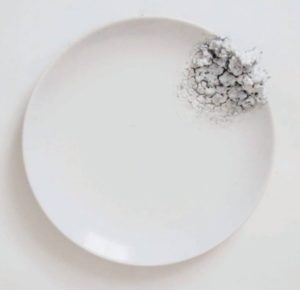 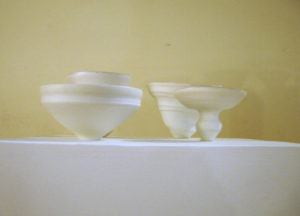 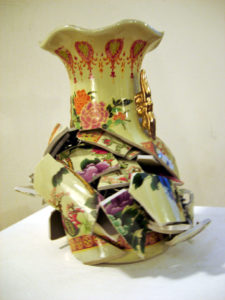 Alberto Gianfreda, Nothing as it seems #2, 2017, vasi cinesi in ceramica e catena in alluminio 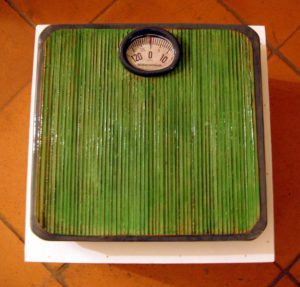 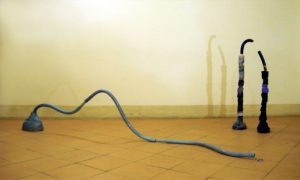 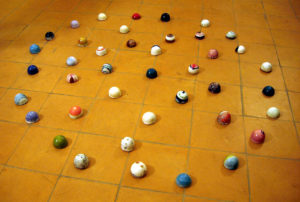 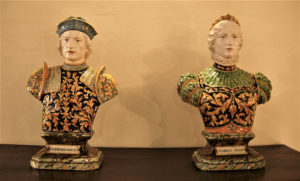 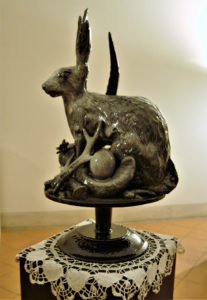 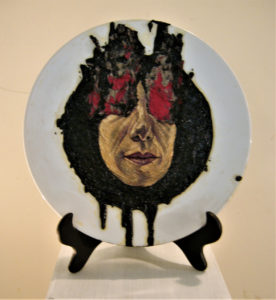 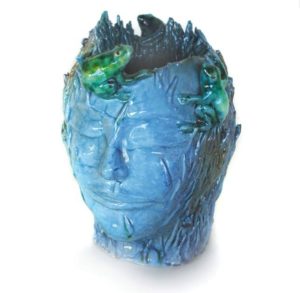 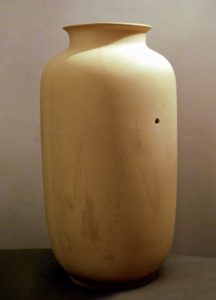 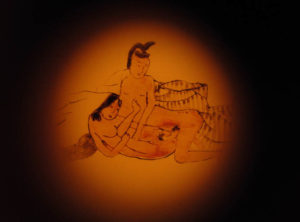 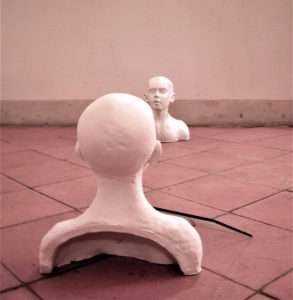