Because I live here. At the TO..

Dieneke Tiekstra. Sculpture as a three-dimensional...

“I think having the earth and not ruining it is the most beautiful art form you could ever want.” (Andy Warhol)

Berendina Sjoukje (Dieneke) Tiekstra (b.1957, Haarlem, The Netherlands), award-winning artist and co-director of Galerie Rueb&Tiekstra in Rijpwetering, after graduating in visual arts in May 2018 at the Kunstacademie Haarlem in Leiden, chooses to embrace a professional artistic career in the field of sculptural design. Accustomed from an early age to transform what happens in her hands (such as printed circuits, views of the city, paper, musical instruments, wood, etc.) into artistic objects, her work focuses on universal themes – time, the future, the movement – seeking the balance between abstraction and figuration. After an initial phase in which she dedicates herself to experimenting with a wide range of techniques and materials, she finds her own peculiar expressive dimension in the reuse of every day waste objects, in an implicit ethical stance against over production that negatively characterizes the era in which we live. The formal and semantic reinterpretation of these apparently banal elements aims to explore their still unexpressed creative potential, bringing out new connections that stimulate the imagination of the observers by inviting them to actively reconsider the environment in which they live.

The artistic research of Dieneke Tiekstra is oriented towards the creation of a direct language, instinctive and playful, capable of arousing complex questions using simple and readable forms, which do not reject the viewer with useless hermeticism. In the series “The evolution of Man” the artist materializes her interest in the design of the future, which has become a paradigm of a lifestyle that will inevitably have to deal with the widespread presence of machines and the intrusion of digital reality also in the most private aspects of our life. What will the world look like in a hundred or a thousand years? Will man be destined to disappear in a digital cloud? Will humans and artificial devices manage to coexist peacefully on the same planet and protect its existence?

The aforementioned series of works is composed of sculptures made from hundreds of fragments of puzzles depicting men, women or hybrid creatures in expressive poses, asexual characters that embody individuality and the generality of species. These bodies are always devoid of clothes, but they are not naked because the pieces of which they are composed form a colorful skin, an uninterrupted and ever-changing fantasy that makes the demarcation between inside and outside uncertain. The human being is in constant motion and its presence in space and time is represented by the artist as a fragmentation and a temporary recomposition of an order in constant evolution. Will the future always remain wrapped in uncertainty or will the various pieces find a definitive place one day? We can not know, but the harmonious compositions of Dieneke Tiekstra, “superorganisms” that recall the nests of eusocial insects in which each individual, like the organs of the human body, performs specific tasks, portend a positive resolution of these questions.

From the structural point of view, on the one hand the figures appearas “skinned” anatomically (some muscles and joints are distinctly recognized), for another they resemble machines formed by mobile gears. Their presence develops through the alternation of cavities, reliefs, full and empty that generate a fragmented and discontinuous clair obscur that recalls the sudden appearance and disappearance of the pixels of a digital image. In this way it seems that the figures are modeled according to the surrounding space, enclosed by contour lines that develop as a sequence of curves now concave, now convex that do not limit their physicality but expand it in the space. The anthropomorphic sculptures of the Dutch artist redefine the concept of the human body by identifying its deepest essence precisely in the metamorphosis and in the movement that at first sight seem to undermine its integrity.

If the movement is the outward manifestation of a search for balance, the body appears as a material shell that holds within itself a higher principle, the soul: hence a constant tension, the epic effort of humanity to get rid of this impediment by elaborating a structure more suited to satisfying the multiple forms in which its most spontaneous and pure “I” can be embodied. Translating this suggestion from the symbolic level to the stylistic one, the expressive figure of Dieneke Tiekstra reflects an analogous aspiration to merge abstraction and figuration to free materials from their objective limits and transform them into pure emotion.

An equally stringent bond betweenform and content can be found in the choice of preferably using recycled objects: the titles of many works, such as Decline of the Earth, Time traveler or Last man Standing make us imagine an epic narrative of humanity traveling to survive itself, capable of transforming obstacles into beauty tools to consciously set out towards a more sustainable future. The emphasis on movement and fluidity, a result not easily obtainable in sculpture, reminds us that the environment in which we live is an integral part of our body and that only the perception of this interdependence will allow us to develop ways of existence that respect this necessary interpenetration. 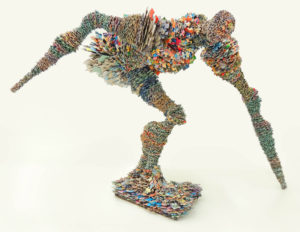 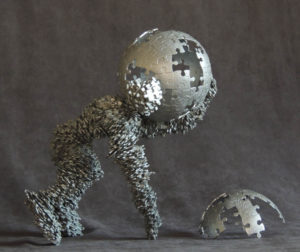 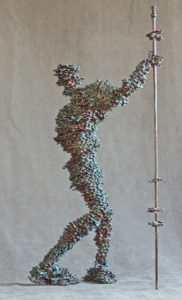