Elisa Sighicelli does not want to tell any story but, with Stories of Pietròfori and Rasomanti, she addresses the prompt invitation to observe. The exhibition, curated by Denise Maria Pagano, is the second episode of a trilogy on spaces – after Palazzo Madama in Turin and before the intervention at Castello di Rivoli on Villa Cerruti – and winds through eight rooms, exceptionally transformed into magical spaces, of the Pignatelli Museum, among the very rare houses-museums of Naples that since 2010 is also known as Villa Pignatelli – House of photography. Dispelling the belief of a documentary and merely reproductive function of photography, Sighicelli, among the most internationally appreciated Italian artists, does not use the camera in a forcibly artistic and representative manner, but wisely leaves it to act as a tool capable of recording traces of autonomous presence , tearing the veil of its potential as a material, even before it as a medium.

The thirty-three photographs on display, made from scratch, are not just images, or the product of a technique and an action, but also – and above all – real iconic acts. They are images, it’s true. But active images, with an extraordinary semantic force, which are not limited to the gesture of production properly so called because they include the act of reception and contemplation, seek a wider fruition space, craving an almost physical interaction. And it is from the encounter with the specific and absolutely unconventional materials on which they are printed, from the floating satin, to the porous travertine, up to the shining marble, that these photographs find new life, which reverberates silently in the play of reflections, of shadows and backlight, as in an unpredictable kaleidoscope of shapes and colors.

The feeling is that Sighicelli, seizing the infinite possibilities of the photographic medium as an irreplaceable critical tool of analysis, capable of influencing the visual interpretation of reality, places it at the foundation of a path that reflects on the relationship between objects in the space, enhancing its transformative and evocative capacity. In fact, the subjects immortalized become here, now, objects on multiple levels, exposed, investigated and solved according to the intention of detecting-revealing every representative and perceptive manifestation of reality.

Two marble photographs of a human table stand, like two different points of view of a single body, introduce the exhibition, tickling the spectator not to disregard the correspondence between the subject and the support. In the first rooms, which seem to be inhabited by fantastic and illusionistic forms, effects of light and movement we meet a series of prints on satin, bright, alive, unstable, which moves.

From the ballroom of Villa Pignatelli, Sighicelli, letting herself be guided by her own impressions, exploits the almost magical potential of some mirrors, rendered inmogeneous by oxidation, to create a filter with a pictorial effect, capable of transforming the characteristic neoclassical style of architecture in a series of ghostly images, where the lights of the crystals of luxurious chandeliers are enhanced and the colors vibrate. From the Villa Floridiana collection of Murano glass he photographs details with two different fires, cleverly placed one in front of the other, to give us the impression of an afterimage that continues to appear in the vision even after the view of the original is ceased.

And yet, from the Carriage Museum, she immortalizes some details of the headlight of the carriages in such a close way as to blur them up to destabilize the view, returning a vivid impression of fluidity. Thus we define the contours of a magical universe, sometimes dreamlike, capable of becoming substance and impressing, with ever new thicknesses. Beyond the villa, at the National Archaeological Museum of Naples and at the Centrale Montemartini in Rome, Sighicelli took the photographs exhibited in the last rooms. Printed on marble and travertine, they capture the curvilinear and muscular gestures and poses of the ancient bodies of classical sculpture, including two details of the Farnese Bull representing Dirce’s torture, together with the fineness of tombs and a detail of the façade of the Gesù Nuovo church in Naples.

Volume, porosity and veins of invariably two-dimensional objects confuse us by transmitting the idea of ​​three-dimensionality. But there is no short circuit between reality and representation. What we perceive as immediate is, in fact, a mediated relationship between experience and medium. They engage reality as it can be understood beyond representation, everything depends on the use made of it to perceive reality. It is therefore the faculty to recognize in them their materiality and their tangibility, in real space, to restore their scope: the intentionality, not the time of recovery, guarantees the duration of these photographs, as well as a testimony, as a reality same as our time. 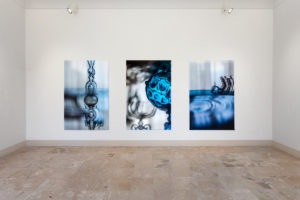 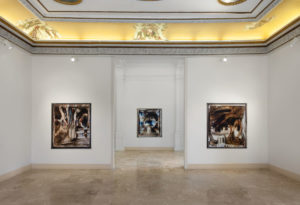 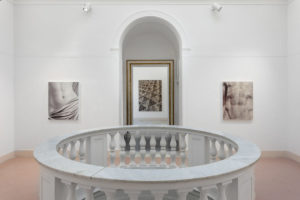 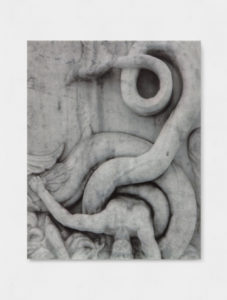