At the Thomas Dane Gallery six Brazilian artists of different generations meet in Terra Trema, a collective exhibition created by the Neapolitan gallery in collaboration with the Mendes Wood Gallery in Sāo Paulo. The title recalls the homonymous film in which Luchino Visconti in 1948 was filming the novella I Malavoglia (1881) by Giovanni Verga. Ideally continuing this great epochal fresco in a matriarchal sense and setting it in Latin America, the exhibition explores a period from 1968 to the present day through the works of Paloma Bosquê, Anna Bella Geiger, Sonia Gomes, Patricia Leite, Solange Pessoa and Leticia Ramos, which naturally fit into the Neapolitan multicultural scenario.

The work of Leticia Ramos (Santo Antônio da Patrulha, 1976) focuses on a search for the principles of photographic image. The artist has traveled to the most distant places, such as the Polar Circle, to capture dream landscapes that encourage the public to wonder about the veracity of the photographic image. Her primordial visions evoke a dystopian future and resist the anxious speed of contemporary visual culture. Made with simple means, they explore the limits of analogue photography by experimenting with different techniques to capture light without a camera, directly impressing photosensitive paper. Photography is interpreted as a form of mechanical and chemical magic: capturing the trajectory of light on silver gelatin, the artist creates “landscapes without the landscape”, whose powerful and deliberately ambiguous aesthetic investigates the illusion and malleability of real. Her method includes the use of documentation techniques manipulated to obtain spectral and semi-abstract visions. The film in the exhibition, “Não éficial para um investigador da natureza simular os fenômenos” (2018), documents a sequence of simulated volcanic eruptions in which it is almost impossible to distinguish reality and fiction.

Sonia Gomes (Caetanópolis, 1948) for decades worked in relative isolation in the Brazilian city of Belo Horizonte. Her sculptures are made with fabric, threads and light objects found or donated that play with the spiritual potential of their combination. The compositions derive from a spontaneous and casual practice of deconstruction and re-assembly of these fortuitous daily encounters, in which the vestiges of indefinable previous existences and the physicality of the present converge. In the meticulous folds of these sculptural fabrics traditional craftsmanship and an erudite and precise gesture converge, ready-made and authorship. Gomes’ precarious textile sculptures mix biographical and historical memories with intuitive materializations to redistribute the complexity of existence in new organic forms and pulsating visions of life. In Maria dos Anjos, (2017-2018) the artist reworks an enormous wedding dress received as a gift in Venice. Transforming used clothes into sculpture implies for her an assumption of responsibility towards the stories of the people to whom they belonged, it is a sort of ritual that continues the magical practice with which her mother, of African origins, blessed people with a branch of a plant called Arruda.

The soapstone sculptures of Solange Pessoa (Ferros, 1961) resemble large relics or archaeological remains that recall the primordial origins and prehistoric life and arouse a catastrophic sensation in relation to the passage of time and its impact. Her main source of inspiration is the personal memories related to Minas Gerais, the Brazilian state in which she was born and lives, to which a deep bond of love and disillusionment ties her. The country is indeed very hospitable for foreign travelers, but every year hundreds of people are killed and as many women raped. The steatite skulls made by the artist resemble pebbles polished by the sea whose rounded ends have been patiently rounded by the waves. Their hollow volumes are welcoming and threatening at the same time, fascinating and painful and their presence wants to reactivate the traditions of the artist’s homeland without reinforcing the isolation stereotypes.

Since the 1960s, Anna Bella Geiger has explored the relationship between body, space and national territory by extending the language of maps and cosmogonic maps to the geography of the human body, defining this confluence anthropo-morphic-cartography. The artist belongs to a generation that has experienced Brazilian dictatorship and the economic crisis, events that have decisively influenced the poetic and strongly political aspect of her work. Her research focuses on the investigation of cartographic representations and their implicit structural control and leads to works that inevitably reinforce the value of a marginal point of view. Her films are an instigation to transgression: Mapas Elementares No.3 (1976), for example, is a visual poem that alludes to the conditions and myths attributed to Latin American cultures, while the video Passagens II (1974) shows the artist intent on repeatedly climbing the stairs – from the domestic to the monumental ones of large public buildings -. The performance contains a clear allusion to the repetitiveness of female occupations, hinting at a possible transgression with the progressive approach to the centers of power.

Paloma Bosquê‘s research (Garça, 1982) is largely based on her daily practice in the studio. In this environment, she freely manages and associates materials that are not typical of sculpture, creating compositions of different sizes and scales. In the constant search for a possible and consensual balance between the selected elements, the artist often develops specific methods to combine, juxtapose and unite materials without ever forcing them to a definitive interaction. The presence of artifacts and handicraft products alludes to the relationship of her sculptures with the body, while organic materials and geometric shapes connect characters of the Brazilian neo-concrete movement with post-minimalist sensibility. The artist favors the physical presence of the objects she uses with respect to their potential symbolic value: by experimenting with the texture, the weight and the balance of materials, she creates an extremely delicate visual landscape that intrigues discouraging any punctual attempt at interpretation and reminding us of fragility certainties that support everything we consider permanent or definitive.

In Patricia Leite’s paintings (Belo Horizonte, 1955), which include new works on wood created specifically for the exhibition, the minimal bucolic depictions show a deviated perspective that makes the views of fleeting travels and videos almost naïve; these sources reveal personal experiences and tactile sensations. 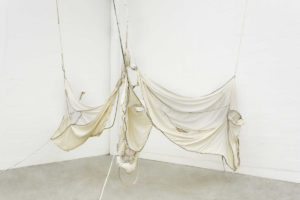 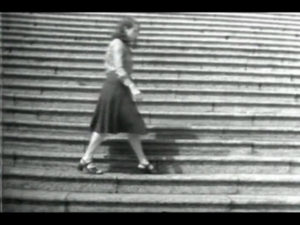 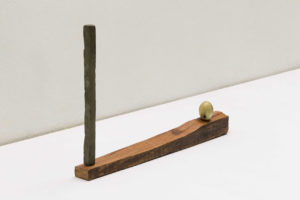