Remo Bianco. The imprints of m..

The mysterious portraits of Ko..

To those who follow already beaten paths, renouncing the search for their own, and other, courageous way to go, Ekaterina Panikanova extends her hand to accompany them to cross her garden, where each step does not lead to a goal but is itself a goal, in the moment in which it proceeds forward.

Attraversando il mio giardino (Crossing my garden), the exhibition curated by Marina Dacci, seems to be the concrete implementation of the answer to the question that common sense has adapted from Gauguin’s masterpiece: Where do we come from? Who we are? Where do we go? And in a certain sense the solution, one, is contained in the polarization, among the most distinctive of the human field, between nature and culture.

Born in 1975 in Russia and graduated at the Academy of Fine Arts of St. Petersburg, Panikanova has lived in Rome for more than twenty years. The city is the scene of her punctual search for books, notebooks, scholastic and informative texts that she finds in the most traditional markets of fleas and thrift. All inherent in schooling, education or religion, those spheres that therefore direct individuals to a hypothetical behavioral ideal, conforming them to a series of conventionally recognized codes, these writings are taken up and re-contextualized by the artist who paints them in ink and acrylic with a series of subjects that emerge from the intimate sphere of his childhood memories.

At the entrance of her garden Panikanova puts a video cameo that stimulates a memory of the planetary movement, which has always fascinated the human mind. And as on the screen the two balloons slowly float in the water of a swimming pool, so we move towards the site specific wall work entitled Sopra(v)vento. Developed on three different levels, the watercolor paper, the books nailed to it and a video projection, the work requires focusing on the wind as a natural element, now projected on paper after the artist filmed it when it blew strongly in the countryside of the Agro Pontino, making the fronds of the eucalyptus trees rustle.

Knowing the habitat that surrounds her, Panikanova did not randomly choose eucalyptus but she knows about that ancient belief – rooted since the times of drainage – which attributed to it purifying properties. It is so, with the sound and the movement so vigorous as to hypnotize, that it tickles the viewer to take over, getting rid of the constrictive repression of his own unconscious. Now the doors of the imaginative dimension have opened up, the crossing of the garden seems to materialize when you reach the great installation with which the artist puts herself to the test, experimenting with the medium and the use of materials so far unrelated to her.

The palaces of glasses, real containers of memories that revive childhood memories and family traditions, together with the towers of books full of stories, the elements of the animal kingdom, the monochromatic stains that report to the Rorschach test, the life-bearing nests and those laces, reproduced in ceramics and porcelain on the model of humble feminine activity, so similar to mushrooms and molds to be confused: everything gives shape to the carpet of the chimeric garden of Panikanova in which the natural cycle seems to be completed harmoniously.

Perhaps also inebriate by the sense of well-being that pervades a space where nature and culture are accomplices and are not mutually exclusive, urged to accept the idea of ​​end as a transformation, all that remains is to go through them in order to really investigate one’s own personality, examining the functioning of the thinking, examining reality and measuring the capacity for correct representation of oneself, and of others, in relationships. The delicacy and complexity that define the walk induce us to project ourselves out of ourselves.

Towards L’Altrove, for example, as the title of the other cameo video suggests, a few steps from the installation, where a girl on a swing gives her back to the viewer while another figure, feminine although invisible, observes them. Freed from any interference, this is the first opportunity to test oneself and relate to another presence. Who is it? It is not known. As indeed we will never know the form of that instance that inevitably directs us and shapes us. We can, at most, hypothesize it.

And the doubt comes that it looks like a book, black on the surface, like the one that Panikanova nailed to the entrance wall. Similar to that book, only in appearance is the individual defined by a set of properties, according to a merely proprietary and disjunctive logic: besides there are all those relations between opposites that mutually imply each other and always call for new, even if hidden, identification processes. Crossing Panikanova’s garden means then discovering them and discovering them means that the Self is (free to be) other – borrowing – and transforming – the words that Arthur Rimbaud wrote. 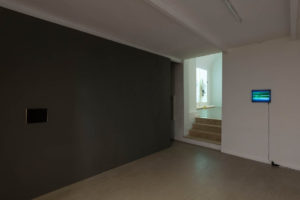 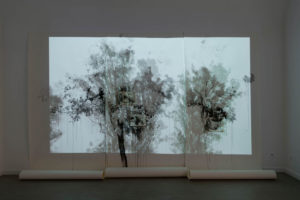 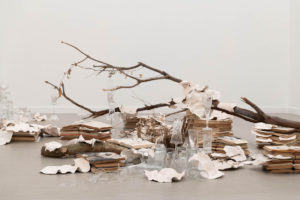 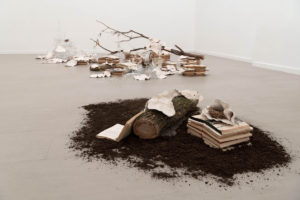