The mysterious portraits of Koroush Sarmadi

The mysterious portraits of Koroush Sarmadi

“I’m guessing, everybody wanna be somebody …” recited a famous house song from the 90s, unknowingly anticipating the obsession for self-representation in celebrity style that thirty years later would have invaded the web through the widespread presence of social networks. In the last period, the ambiguity between wanting to be someone and ending up being anyone just because of the homologation of the visual standards through which the collective imagination ratifies its media idols is evident. The multiplication of images (of the self) conveyed by the network has also renegotiated the traditional canons of the portrait, a figurative genre that has strongly come back into vogue with a style that is at the intersection between painting and photography.

These reflections want to introduce the work of Koroush Sarmadi (b.1993, Tehran) a young Iranian artist who, after several exhibitions in his hometown, was recently selected for a collective exhibition in Vancouver organized by the Federation of Canadian Artists Gallery. At the center of his visual poetics we find the portrait, the pretext to capture a variegated catalog of real or imaginary humanity through paintings identified by a few compendiary and structural brushstrokes. At first glance, nothing strange: a gallery of male characters is appearing before our eyes, looking beyond the space of the canvas, sometimes looking for a direct comparison with the viewer, others as if they got lost in an unattainable place elsewhere. The artist does not indulge in superfluous details but with a few traits identifies physiognomies and states of mind that appear instinctively verisimilar, as if each painting were the result of a silent interplay of looks between the painter and his model, a mutual study and understand.

All the portraits convey a sense of enigmatic suspension, as if their contact with the world was uncertain, on the verge of cracking: at the same time the vividness of a recent memory and the indeterminacy of a mystery that thickens with the prolongation of the observation. The lack of contextual references, the newly sketched or totally abstract backgrounds, the generic clothing, amplify the feeling that what we are looking at is not exactly what it seems at first sight. Contrary to what happens in traditional portraiture, there are no clues to define the peculiarities of the individual, his belonging to an era, a profession, a social status, even though carefully observing we begin to recognize some characters. Some references appear obvious, such as the iconic presence of surrealist painter Salvador Dalì or Prime Minister Winston Churchill who led the United Kingdom to victory in World War II, others will appear as such only for those familiar with more specific cultural contexts, such as Iranian poet, writer and journalist Ahmad Shamlou.

The fact that the series includes famous people, leads the viewer to attribute real identities also to the anonymous faces that parade before his eyes, triggering an intriguing short circuit between truth and fiction. In one hand the subjects seem to exist in a pictorial limbo outside a given moment and place, on the other it is not their reality of people that is represented, but their intrinsic humanity, made essential. Koroush Sarmadi considers his subjects as existential suggestions, rather than as explicit stories or specific portraits. His characters, who emerge in a sober, almost in a theatrical way, challenge the viewer with intense and determined looks and are the reflection of a deep emotional connection between the artist and humanity and invite the viewer to meet them in turn, recognizing them as an aspect of themselves.

The visual poetics of the young Iranian artist fits into traditional formalism, adhering to parameters of pictorial specificity such as line, color and dimensional scale, but the subject and the way in which painting is managed are decidedly contemporary. By abolishing every hierarchy of importance between known and anonymous characters, Koroush Sarmadi interprets the act of painting as a political action and as an instrument of social criticism, which reveals some fundamental traits of our contemporaneity. The reason why his paintings are so captivating and so disturbing is the cognitive uncertainty they produce, the uncertainty that attracts attention and that is played in a refined dialectic between the emphasis (of photographic matrix) on the subject’s bodily characteristics and the lack of interest in its identification.

Koroush Sarmadi examines lights and shadows of his mental images and transforms them into figures without using any reference model. Through painting, he creates character elements that do not belong to real people, placing his figures in possible, but undefined, worlds that do not identify narratives but suggest openings to stories, leaving the visitor free to imagine. The deception of celebrity images is a trap that forces the observer to penetrate with his gaze into the paths of color and into its intrinsic expressive possibilities, free from the referent. The evident structural brushstrokes, spread with the immediacy of a gesture that does not allow for revisions, foreground the quality of paintings, their live presence, and at the same time his paintings are characterized by an economical means that allows a crude, unresloved conceptual space to emerge.

The physical and psychological traits of the protagonists in his paintings reinvented the human identity to favor the concentration on his multifaceted essence and on the impossibility of exhausting its representation in a catalog of exemplary subjects that in fact reveal their nonexistence just when they seem to affirm it more forcefully. The deception of these portraits pierce the veil of illusion on self-representation concept and returns fluidity to a collective imagination that now invalidated by mass media conditioning that, in the name of easy cultural consumerism, tends to attenuate the symbolic scope of its models reference reducing them to a pop icon. 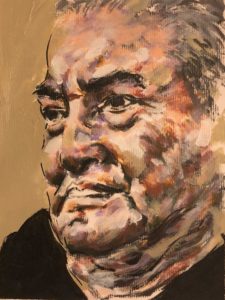 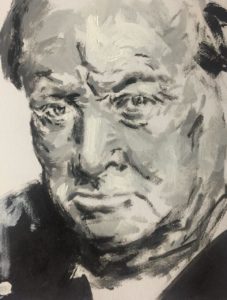 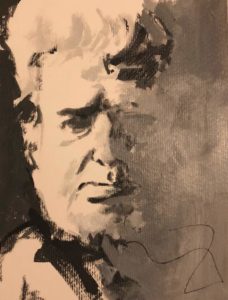