Labels are never liked. And rightly so. They risk remaining as a brand, functioning as an indelible mark. However, we are use them because they symbolize a trait, they indicate a reference that guide the sensitivity and therefore the appreciation of what we are talking about. All these precautionary premises seem obligatory in the face of Ettore Albert‘s work, for which, despite the breadth of the suggestions it evokes, we dare to speak of a “post-pop” style.

“Pop” because in the wake of that great pictorial season that dates back to the sixties and seventies (which immediately brings to mind among many names artists such as Hamilton, Rauschenberg, Warhol, Lichtenstein, Oldenburg, and in Italy Mario Schifano e Tano Festa), but “post” precisely because this furrow is constantly crossed, even with almost self-ironic digressions. Just think of the stereotyped image of the kitten which in the collage entitled Cat, Son and Mother acts as a counterpoint, almost like a mockery, to the iconic couple of mother and son of clear and austere religious derivation. An amused playfulness seems actually a recurring feature of the German artist, who loves to juxtapose or overlap multiple levels in his paintings, creating an effect of estrangement and surprise in the gaze of the viewer. However, irony is not the only register he uses, as evidenced for example by his more moving and monothematic attention when he dedicates himself to portraits.

To deepen the reasons for his poetics, we had the pleasure of asking him some questions.

Camilla Pappagallo: Despite all the limitations of labels, what do you think about “post-pop” referring to your way of painting?

Ettore Albert: It certainly sounds interesting. “Post-Pop” describes quite well where I’m coming from – although each of us comes from something that we leave behind to renew, overcome or develop further. “Post” describes for me a state in which everything is open, the moment in free fall – already dead but not yet reborn. Maybe “post-post” would be more appropriate or even better “post-lost” (sounds great too, doesn’t it?!).  I come from a generation that doesn’t believe in anything anymore and those who do, have never been tolerant and curious enough to have recognized the sliver of truth and truthfulness in everything and everyone.

Your works seem to arise from a continuous reworking of images taken from different fields. What relationship exists between fiction, reality and cultural clichés in your way of understanding art?

I think it’s something all of us can sense: boundaries are becoming more and more blurred. There is no clear side anymore, no up and down, no right and wrong, no beautiful and no ugly. And so do the boundaries between reality and fiction, the demarcations of various cultural clichés and categories. And in the end, every idea, every thought, you and I are made up of hundreds, maybe even thousands of overlays – today more than ever. What counts is you alone – you invent the game, you develop the rules and then you play.

When and where did you start your career?

I’ve been painting since I can remember, even as a child I painted and decorated everything, as a teenager I was often on the road as a graffiti artist, then at some point I limited myself to canvases, at the age of 23 I had my first exhibition, two years later my first gallery contract.

Would you have any name to claim as a teacher or inspirer?

Inspiration comes from everywhere – it changes often – of course, in terms of art, people like Rauschenberg, Schifano or Bosch inspire more than others. But in the end, everything and everyone can serve as a teacher or source of inspiration. Simply because of the amount of truthfulness that is in everything. Currently my children are an immeasurable source of inspiration, your questions inspire.

Can you tell us something about the most interesting moments of your past and present work?

There are many – my art, my work – this is my life – and like yours, my life is full of interesting moment – sometimes more and sometimes less. My imagination, my perception and my painting are a kind of exile for me, my happy-place. Reality was and is just often too colorless, too boring and too predictable for me – then my mind plays with alternative realities, adds, minimizes, embellishes and twists. This is the world I play in – this is my world. My art is meant to be a window and an invitation to drop in this world of mine.

Any projects for the future?

At the moment I’m working a lot with symbols, their influence on us and their power: symbols in thinking, in ‘explaining the world ‘, in perceiving and evaluating our fellows and so on. And the human being moves more and more into the center of my reflections, the human being as this mysterious conglomeration of infinitely many levels. What Dostoyevsky, for example, describes, analyzes and portrays in words, I try to approach in pictorial language, through form and color, through signs and symbols. There is still so much to learn, to discover – so much to do, so much to create. 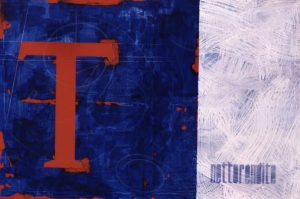 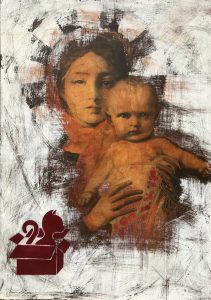 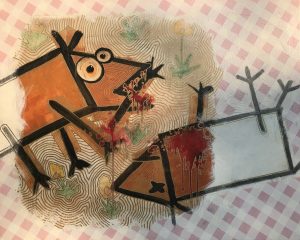 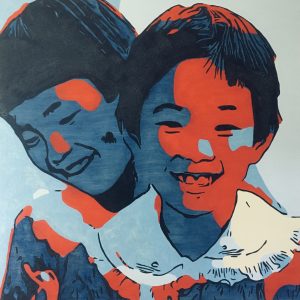 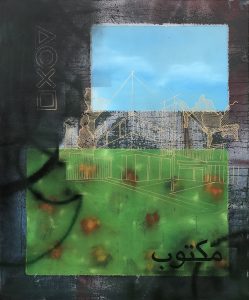