When the Truth comes out of Th..

Cathy Josefowitz, analysis of the body at the dist...

The need to acquire new spaces and mental and emotional experiences overwhelmingly pushes us to break down physical distances. According to writer Antoine Artaud’s suggestive interpretation, it is necessary to deeply study the world “at the distance of a hair”[1], where everything swings in a frightening abyss and from which, nevertheless, one is separated forever. In other words, in this liminal place, located in the brief interstice between us and our surroundings, lies the need that pushes us to go beyond the normal perception of things. It is from such an infra-subtle place that the artistic depth of Cathy Josefowitz (New York 1956 – Geneva 2014) derives, to whom the MACRO Museo d’Arte Contemporanea di Roma, in via Nizza, in Rome, is dedicating the exhibition Cathy Josefowitz, The Thinking Body, created with Elise Lammer and scheduled from the 16th of March until the 19th of June of 2022.

A singular primacy of the Roman museum, as this is the first retrospective that brings together a large and interesting group of works by the artist, referable from the Seventies to the Two-thousands. The show is characterized by various hybridizations, and since the works are exhibited without any chronological rules, the arrangement is energetic and rhythmic in the limpid light of the museum hall. The strength of the exhibition lies in the selective richness of the pieces, that is, a careful choice of canvases and drawings in dialogue with the more peculiar artworks, such as cardboard puppets, an oil-painted fabric dress, and a documentary video. The intent of the exhibition is a successful reconstruction of an artistic journey of dissimilar imagery, that highlights the multiple interests that have touched Josefowitz’s career. In particular, as noted in the critical essays published for the occasion, the artist’s encounter with the performance practices has been fundamental, thus the study of theatrical improvisation and dance, occasion which arose from a direct relationship with Steve Paxton and Thrisha Brown, founders of the Judson Dance Theater group.[2]  It is precisely from such a culture that Josefowitz derives an irrepressible interest in bodily movement conceived as a moment of ritual and experimentation, in the consideration that the organism relates to other subjects in the sharpness of space.

From here, and from the experience derived from a self-taught study of Avant-Garde painting, originates an analysis on the body at a close interval, at the “distance of a hair”, wanting to use Artaud’s definition, according to a panic dimension, that is, with a very deep perception of the external world. Thus, Josefowitz’s painting adapts, with strength and conviction, to the different creative parentheses, yet remaining alive and loose, so that every shape is like a stroke on human nature. From this analysis derives an interest in the existential aspect of the human being, hence the choice of portraying characters drawn from the circus culture, alternating human figures flanked by animals, sometimes portrayed with monstrous features and others all too tame, but still exhaling a mocking character that tends to wring a vivid smile of interest and curiosity. This disruptive creativity, which touches our hearts, appearing to us as a conquest both spiritual and visceral, is to be considered as a pictorial metaphor for an intimate time with a strong reflective character: it is the artist herself who clarifies this aspect, when, in reference to the choice of the pictorial medium, she considers the latter as the best tool for portraying the world that is nothing but «a theatre stage where anything can happen»[3].

Another significant feature of the exhibition is that Josefowitz, regardless of the subjects depicted, sharply brings out the mystery of existence that coincides precisely with the essence of the body; thus, unexpected realms of signification open up, with human representation assuming a crucial role in both the pictorial works and the videos. Whereby the exhibition tells a truth about bodily connections, as man is a sexual being experiencing a longed-for attempt to awaken his physicality. It is precisely on this last strand that the erotic act is approached with subtlety and elegance of mind, evidence of which is the series of works depicting contorted bodies in perspective boxes exuding the carnal feeling typical of Francis Bacon’s works. However, the artist is otherwise playful and joyful toward everyday memories, prospecting, among other things, works that use tax receipts traced in a truly imaginative way as their support. In these papers the background is legitimized to participate along with the subject so to be a creative experiment with a vital Matissian echo. Moreover, the aspect of pleasurable creativity also returns in the paper marionettes depicting figurative subjects oscillating between the real and the fantastic, and whose animation, suspended in the air, is likely a trace of the artist’s interest in performance art, which she regarded as an input for «extending the vision of movement to paintings»[4].

Hence, the exhibition stands as a successful epilogue of a suffused and intimate relationship of the artist with physicality, which never allows itself to be closed within a creative perimeter but always remains authentic and free. In this “artistic accordion” that turns its attention to spirituality and the religion of the body, a meditative mantra can be heard vibrating, to be recited immersed in reality, but always at the “distance of a hair”. 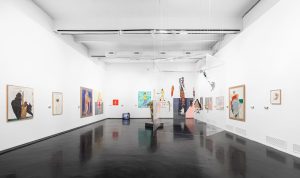 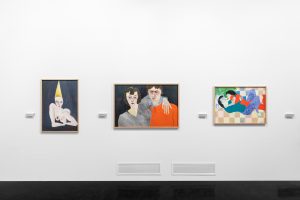 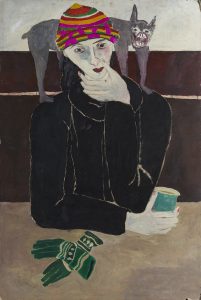 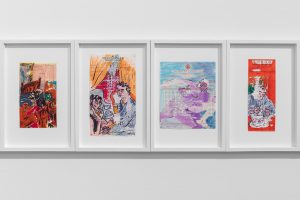