With the loosening of the restrictions for containing the pandemic, the exhibition program promoted by the design brand Gaggenau starts again and grows together with the non-profit project for art in Italy . The new artistic exhibition, entitled “EXTRAORDINARY” is even this year curated by Sabino Maria Frassà. The project originates from the intent to explore the complementary role of contemporary art and design as tools for investigating the present and designing the future. The first appointment of the event, which in the coming months will involve the artists Fulvio Morella, Francesca Piovesan and the duo TTozoi, is the great exhibition “IO|N” in the Milanese showroom of Gaggenau DesignElementi dedicated to the master of the off-camera Fabio Sandri, whose practice uses the deceptive objectivity of the photographic image as a tool for detecting / revealing the fleeting boundary between the individual and the outside world. As the critical text by the curator Sabino Maria Frassà explains, for Sandri there is no degree of separation between the self and the other: in his works, based on the direct exposure of the photosensitive paper to ambient light, the two entities merge into an infinite “US”, a visual continuum where the bodies form a whole with their shadows and projections in the surrounding space.

Emanuela Zanon: For over twenty years your research in the field of photography has focused on the idea of ​​photosensitivity, that is, on the exclusion of the intermediation of the camera (with its hardware and software image manipulation devices) to allow a full autonomy to the action of light on the photosensitive paper. What considerations guided you towards this choice?
Fabio Sandri: The photosensitive material, photographic paper, and the production of the image or form through this medium, well represent for me a plastic matter, that is, a question about the possible and representative material for the construction of the image. I often come back to explain that for me photographic material is a precipitate of experience and materials, the images I build are the memory of materials and therefore also of a History. The photosensitive material that has characterized my research for almost thirty years seems to me to contain all this complexity and representation; I like to use it live, directly, and not only as the final support of a mechanism or a reproduction, but just as a first production, in progress. It is therefore a living material… a plastic matter in fact.

The exhibition opens with the work entitled NUCLEO (IO) (2020), a self-portrait you made by exposing yourself to a zenith light inside a metal cage framed by a camera, whose shots have impressed the photographic paper on which they were projected in real time. What did you recognize or discover about yourself in the imprint you left on the photosensitive support?
I do not mean the self-portrait as my representation, but as a first-person gesture that is made by anyone who uses the device I created, which is not the final work, but the means through which the image is “built”. The “Nucleus (I)” device in this exhibition is not in action but is only presented as a tool to tell the image that we have chosen to exhibit (for the first time). It is an image that is also born from accumulation and concentration, even if I chose to scan it and work on digital. In this case I am interested in the construction of the image through an experience of stasis that allows an immersion into a process of empathy that goes beyond the image intended as a purely visual fact; it is a construction process that necessarily implies “resisting”, a concentration and a stasis and an effort to do it. The photosensitive material represents a resistance that needs an insistence and a stratification from which the final image arises, which in this case tends to a central form, looks for it as a representative form, as a nucleus from which to start, a generating nucleus which gives the idea of ​​a possible further development and goes beyond the figurative fact. Finally, for me it is never a problem to show how I build an image, there are no secrets, indeed I like to share awareness about my work.

A commonplace that still affects the artistic status of photography today is the fact that it is the most likely way to portray the world around us. Although your images are not sortable according to the canons of traditionally understood realism, I find that the “raw” rendering of the effects of the subject’s encounter with light, in which shadows, movements and atmospheric dust are also included, bring to a deeper level of objectivity, which disregards the convention of the Albertian window (or screen) through which our gaze usually reads reality. What would you like to tell us about it?
Yes, in photography I am interested in automatism and a possible degree of objectivity … A tendency towards realism if we can say so … an attitude and a will rather than a certainty, since it is always and in any case a transformation of reality … a waste or a derivative … a precipitate I call it … but it is the direction and the intention that allows me to represent that interests me … also to get rid of other trappings and work with little …

Analogical photography appears today almost definitively undermined by the digitization that has revolutionized our approach to images in recent decades. How do you place your research within this debate?
I don’t think this is the discourse or the debate, if it really exists, that is the comparison or overcoming of one technique over another … As I said the photosensitive material is effective for me for its residual physicality and simplicity, but I also use some digital processes such as scanning and automatic digital inversion which I find very interesting… The problem is not the tool but how to use a tool. For example, in the unpublished work “Nucleo (IO)” presented in this exhibition, I use scanning and digital inversion of the negative, to investigate a further dimension or development of the image. In fact, this image retains in any case the layering character that I am interested in bringing out: the colors are the result of complementarity with the imprint of the video on black and white paper that takes on colors of a sort of oxidation, from which the final color of the image comes.

The exhibition itinerary ends with INCARNATO / FILTRO (2009-2021), a site-specific work redesigned for Gaggenau after a first photographic performance made in 2009. At the center of the exhibition space you have placed a handcrafted pinhole camera made up of a series of boxes of cardboard stuck one inside the other to form a filter, on the bottom of which you have placed a photosensitive sheet that you will leave to impress for the whole duration of the exhibition. The process seems to bring to the extreme consequences the distortion of the concept of time in relation to the photographic medium already present in your works: no longer the fixation of the unrepeatable and fleeting instant, but the condensation of a duration translated into simultaneity. What goal do you pursue with this participatory action?
Unlike what it may seem, it is not a stenoscopy and there is no optics, not even that of a simple hole, but it is simply a shadow niche, a cavity obtained with cardboard boxes mounted one inside the other, a hollow footprint that allows me a rarefaction of the light, a concentric filtering obtained through the repeated perimeters and in progression or expansion. However, I prefer to understand them as “concentration”, that is, they create a physical resistance at the limit of the shape of the image obtained from the impression of the light of the place during the entire time of the exhibition. It is an image that is formed over time, which tells of a WE that is neither anthropomorphic nor anthropocentric, in which light is filtered through these not totally covering cardboard walls. It is nothing more than a device that shows an attitude and a layering as a process to generate the image … Here too an initial core. At the end of the exposure time, the rest of this work will remain, that is, I will make a digital inversion that will transform the “hot” photosensitive matter into an image of blue distance. 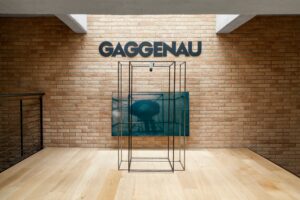 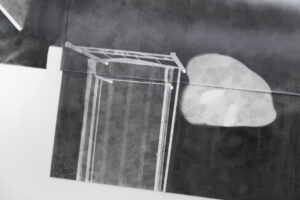 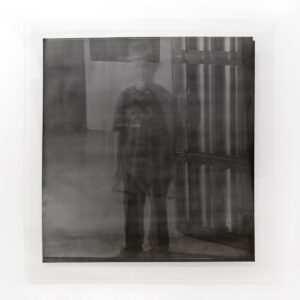 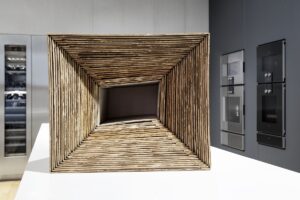 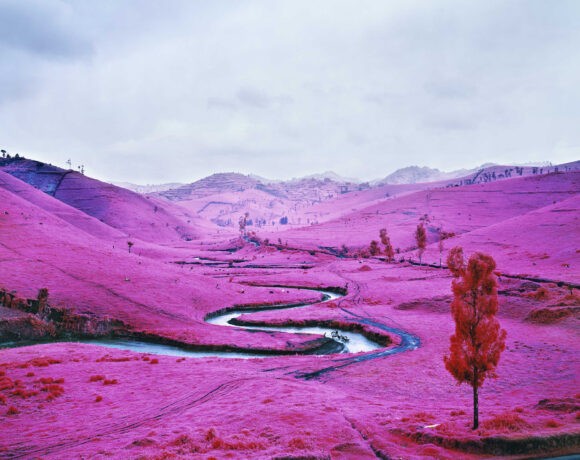 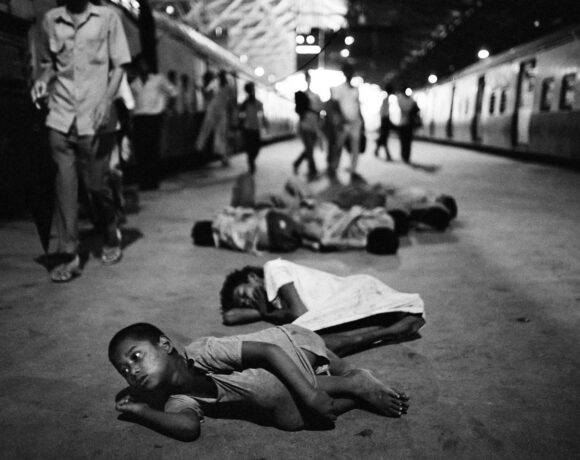 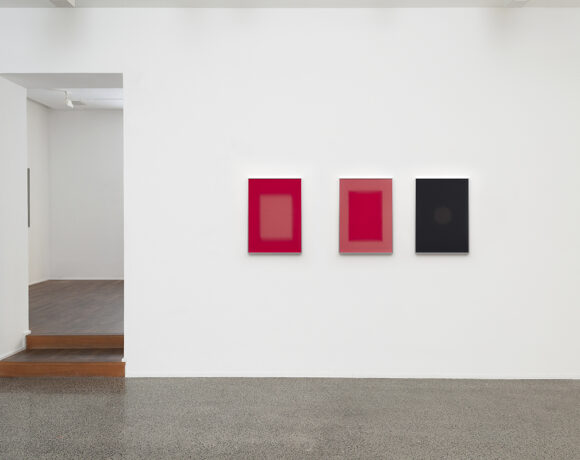