Fashion is a serious matter. Fabula by Charles Fré...

Fashion is a serious matter. Fabula by Charles Fréger at the Armani / Silos

I’m borrowing the title of an essay by Gillo Dorfles to write about an exhibition that, considering the theme, can evoke superficial judgments and epidermal reactions, as happens every time you want to talk about dress codes not relegating them to the superficial, with a good dose of moralistic ostentation, as if they were something accessory, but as a peculiar human need.

Since the earliest ages humans naturally aim at living in a way that is intensified, perfected, consummatory to say it with Dewey: more than worrying about mere survival, the human being seems to rely on strengthening relationships between his fellow men and on the possibility of enjoying aesthetically what he does. Anthropology and philosophy, which in some cases does not renounce its sphere of responsibility, have worked in this sense by introducing, for example, the concept of “artification behavior” (Dissanayake), human question par excellence. Holistic term within which fashion finds its place without difficulty, even if defined as a disconcerting anomaly within the framework of evolutionism, the artification behavior would be an innate fact, related to the need to impregnate qualitatively and artistically, then through formal re-elaboration – also think about the vocal distortions that take place in the communication between mother and newborn – the interactions with the social group of belonging. Therefore fashion is both instrumental and final and the recovery of the anthropological complexity of making art would be anything but an improper encroachment.

The retrospective Fabula, hosted by Armani / Silos and dedicated to the work of the photographer Charles Fréger, is precisely aimed at underlining these aspects, with over 250 images that explore the sense of belonging of individuals to their social group as a basis for an identity that is structured through a common language, that of clothes, uniforms, masks. Beginning with the series of Water Polo swimmers (Water Polo) from the year 2000 to the most recent Mardi Gras Indians (2016), then we can move through the portraits of the Finnish ice-skating team (Steps), of the young sumo wrestlers (Rikishi), of the European armies and their uniforms of representation (Empire), of the Sik soldiers (Sik Regiment of India) and of the elephants of Jaipur (Painted Elephants), up to the Wilder Mann and Yokainoshima series, dedicated to traditional masks in rural contests.

Through a series of immediately legible gestural conventions and an almost hypnotic expressive and postural fixity, the subjects portrayed by Frèger recall that concentration of energy and action conveyed by the tableaux vivants, “living pictures” of long tradition and particularly important during the eighteenth century. The bold colors also give the idea of a frozen but extremely choreographic movement, in which the expression is both particular and universal: an anthropological index, the peculiar way in which man accesses his social context.

As Georg Simmel knew, dress codes do not respond only to a need for conformity and instead have to do with the opposite desire, relating to the need to differentiate and emancipate themselves from too uniform conditions, with relative declination of the (almost) political sense; Giorgio Armani, who hosts the show, knows as well: his style story begins with a women’s jacket modeled on the masculine one, becoming the uniform of new career women in need of practicality. As before Coco Chanel with the invention of jersey and the preference for a comfortable and functional feminine style and Yves Saint Laurent then, who transforms the trouser suit into the first woman’s tuxedo suit, that’s how fashion becomes revolution, intimate fusion, like art, of freedom and necessity, form and substance. 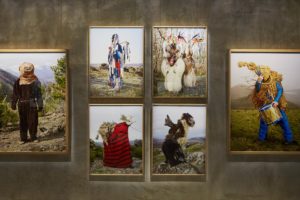 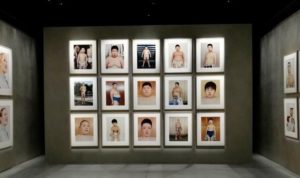 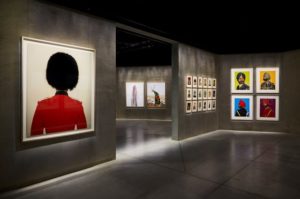 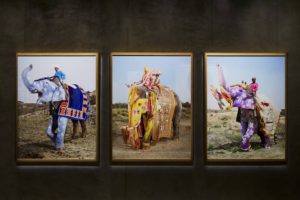 For all images: Installation view of “Fabula” by Charles Fréger. Armani/Silos, Milano 2019. Courtesy of Giorgio Armani.