Figure Out. Proposals for a contemporary painting

Figure Out. Proposals for a contemporary painting

Nowadays talking about contemporary painting is always angular and it requires a highly accurate property of language. In fact, the title of the group show “Figure Out” (with works by Andrea Bolognino, Verdiana Bove, Elia Fidanza, Pietro Moretti and Natacha Donzè) is really accurate. The exhibition opened on 15th September at the Roman Gallery 1/9unosunove which again is remarkable for the meticulous curation and for the always harmonious and never predictable setting.

Today, it is inevitable to wonder what the trend or the path of painting is – more than its unnecessarily nullified destiny – especially without making the generational question pass quietly. Emerging or mid-career painters carry on their shoulders the now monumental weight of the last century, poised between a nostalgic historical-cultural heritage inherited from the past and a look towards the new millennium. The “good” Critic, on the other hand, coming from illustrious pens who are active protagonists of Contemporary Art since the seventies in Italy, has tried to preserve the importance of an analytical methodology towards the definable and figurative proper to the pictorial material; to group artists according to ideological strands, in the face of the inescapable extremization of American Abstractionism that has temporarily dissolved the figuration of the human in favor of a presumed sentimentalism and the spread of socially engaged Art.

However, if the body, the visible or the sacred disappear from the canvas, what remains if not the ethereal thought and the color pigment? The massive artistization[1], as Perniola would say, of alleged meaningless works-objects has made mute the natural beauty, sometimes expressible through the depicted body, which is mistakenly disguised in apathy as it gets lost in its incommunicability. In fact, as Paolo Fabbri said, “we are instead a society of subtraction in which things have a vocation to disappear under their own accumulation, without meaning and without memory.”[2]

The question of generational painting can only be more topical today. Choosing the verb “Figure Out” as the title, playing on its double meaning of understanding, solving, but also imagining and figurating, it emphasizes the need that contemporary times try to find again in the face of uncertainty and reiteration of the same: to define a trend or a path of very young painting; to look at the new image through the new generations; to understand if there is today the distinction between representing and depicting. The new criticism is waiting for nothing else more to get out of the individualism and self-referentiality of the artist and to find an ideology of shared thought in order to write the new manual.

Through abstractionism we return with “Figure Out” to the “re-figuration” of a reality, sometimes deliberately declared and essential, as in the present artworks by Moretti, Fidanza and Donzè, sometimes faded, or imaginary instead, like those by Bove and Bolognino.

Solving the enigma of generational painting means attributing its necessity, “as a privileged tool to analyze the most significant and intimate aspects of my reality”, says Verdiana Bove. Nulla due volte accade I-II (2022), title of her works, are a hymn to the time and to the preciousness of individual memory, but not necessarily the lived one. Starting from archival photographs, the author carries out in her paintings a process of appropriation and reworking of the image. The idea of reality and memory inherent in the two-dimensionality of photography is transformed, recreating an “other” representation of the real datum, which, like a memory, fades through the pictorial paste.

If in Verdiana’s works the figure dissolves by activating in the eye its imagination as well as imaginative capacity, in the works by Pietro Moretti, on the other hand, this same one is concretized. The figure, for the Roman artist, becomes an essential and concrete expedient of apparently isolated tales, typical of a shared unconscious experience made up of objects, devices and scenarios of a pop-cultural heritage that, like a melancholic fabula, almost needs to be read from afar. London trained, Moretti looks at painting at a distance as he was the critic of himself: “in contemporary times”, the artist declares, “we see a return to figuration as if it could respond to the need to find a definition of our time”. In I galleggianti (2022), body figures of teenagers appear slender but sometimes grotesque, suspended in a deep and dark fluid mass, as they were in an imaginary dreamlike ocean, where alien creatures and natural elements emerge from the surface. The bodies in Moretti’s imagination, although strongly plastic, merge porous with each other abandoned in an embrace (Tra i tuoi vuoti, 2022).

The figurative in Andrea Bolognino’s works is confused in the abstract, using its perceptual ambiguity. In a post-apocalyptic natural scenario, Bolognino’s bodies through the lights and darks of the drawing seem to explode or hide like fetuses at the mercy of an almost evil nature that, with violence, wants to encompass them (Automa – Autore, 2022).

The imaginative capacity of the verbal symbol is amplified through the works of Elia Fidanza (Fear and Disappear, 2022), where the association and the logical correspondence between written and figurative text is not univocal but finds a solution in the individual imagination of the observer. The enigma of generational painting therefore seems to carry on again a desire for essentiality and definition, struggling within alienated scenarios, where objects transposed by their habitual perception are immersed in another which is unexpected. With Natcha Donzè, the relation meaning/signifier of the pictorial image through the figurative elements present in her works leads to interpret in a never taken for granted way (All day, eating flowers, 2020; Emotional Forecast I, 2019). 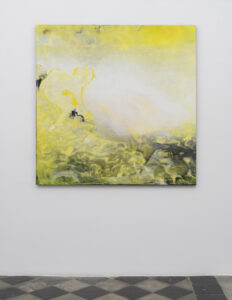 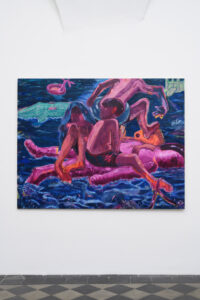