Gilberto Zorio. The artworks fluidify and fluctuate from one century to the following one. 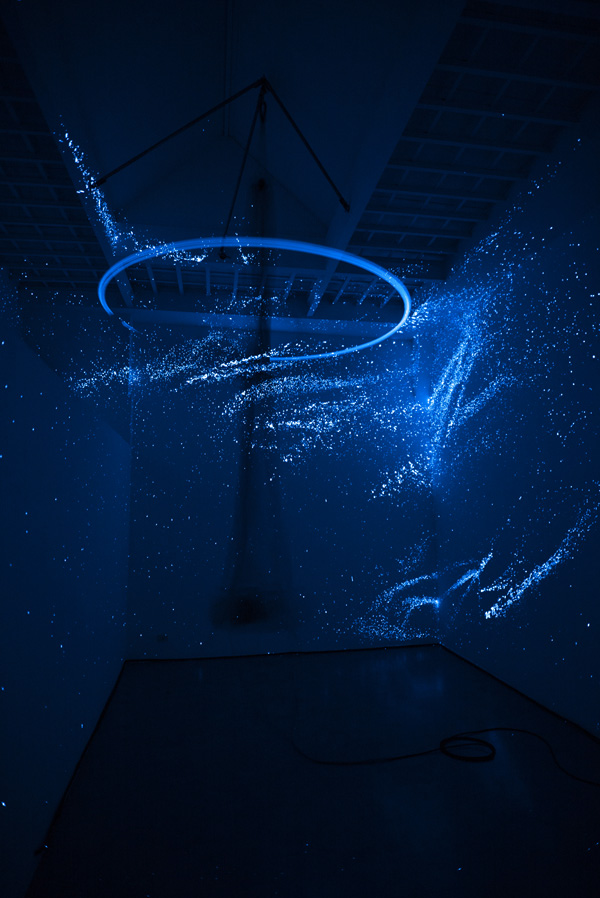 De’ Foscherari pays tribute to Gilberto Zorio with a solo show that traces fifty years of collaboration between the Master of Art Povera and the gallery. The exhibition is conceived as a living organism in which works created in different periods dialogue and recall each other reciprocally implementing themselves. Going beyond the boundaries of the retrospective, the works are catalysts for reflections on the evocative potential of artistic practices and the mystery of a universe constantly reshaped by organic and psychic energies. The exhibition highlights Zorio’s attraction, that is traceable from the early works, for physical, chemical and alchemical processes and for contrasts, modifications, aggregations and tensions of matter that open up infinite new existential and poetic possibilities.

Some constant elements of his language recur, such as canoe, stills, javelins, animal skins and stars of David that according the author assume the value of archetypal forms such as human units of measure for the immeasurable. Zorio’s expressive vocabulary comes from the intention to manipulate and shape the pure energy and the consequent need to provide suitable containers and conductors to restrain and concentrate it and then release it at the appropriate time. It is emblematic in this sense the repeated display of an openly shown cowhide associated with incandescent electric heaters or the star pattern: if the skin exhibits, involves and protects the animal’s biological vitality, its lifeblood seems to find practical expression in the added elements to which it metaphorically provides energy. The apparent informality of tanned leather also contrasts with its inherent vocation to resist to protect the innards from the explosion that atmospheric pressure would otherwise cause, recalling in this way by analogy the essence of sculptural practices understood as an act that defines a form.

The most dated work in this exhibition is “Bed” (1966) where an essential scaffolding supports a network of stranded strips of tire rubber partially hidden by a metallic sheet that retains the imprint of the plot below. If a certain pop reminiscence is still noticeable in the title and in the gigantic object, the use of humble materials and the tension created by the ambiguous perception of weight, hardness and inclination of its elements inscribe in its own right the sculpture in the Art Povera that it was officially coined by Germano Celant in the following year. This imposing structure structure interacts with the diaphanous lightness of “To purify words” (1980), a composition made by three javelins connected to a pyrex glass ampoule containing alcohol and phosphorus. If in Zorio’s opinion “every man is a vessel of minerals and water and  his veins, lungs and organs are an extraordinary chemical laboratory made of pipes and stills,” the small container with a thin neck and a globe body recalls a human stomach and the spirit which it contains has the metaphorical function to free from impurities and lie the words spoken through its mouthpiece in a poetic verification of the “in vino veritas” motto. Again spears and compasses supporting tubes make “Calibrated Star” (2016): in this case the stills allude to alchemical transformation that will receive potential energy from the javelin, a symbol of desire and of exceeding limits, and from the complementary measurement tool which will orientate the direction. If the compass is the measure and the rationality of a culture that would look toward infinity but which cannot get out of a microcosm, the star is the energy symbol par excellence, in its cusps focuses the maximum power of the electromagnetic flux that crosses it, it is a broadcaster that attempts to communicate with the Universe and the projection of the cosmos that man dreams to explore.

According to Zorio materials are not symbols but sheer force, so the “Projecting Canoe” (2016) is raised and rejects the last landing despite the flaw that it pierces its stomach, it soars into the future and raise the vial in which a phosphor liquid seethes; a pump inflates air into phosphorus and give it oxygen to induce its luminescence that in the dark will become memory of the diurnal  vision. The energy transition is the fulcrum of “Marrano with braid” (2016), a wineskin made of pig skin which when filled with air swells, hisses, twists and rotates on itself clinging to a copper braid, metallic conductor par excellence. Los Marranos, pigs, was the derogatory appellation loftily addressed by the Spaniards of the fifteenth century to the Jews and the Moors who declared themselves Catholics not to be killed: Zorio offers his marrani the opportunity to rebel swelling and rising to freely breathe reversing and repairing the course of history. Art is so understood as a process that strips its own items and procedures for replacing the representation of content or a form with pure energy understood as operational ability to fill a void, to empty a full, to schedule past, present and future and to galvanize the inertia to put it back into the cycle of life.

For this reason the artist is not a creator but demiurge, he moves matter and makes it collide so that the world might happen and the transformations that he triggers are beyond rational control to converge in a magic, alchemic and artistic explosion.The visual and angular relationships between the works thus far considered are strengthened by a background sound of hissing, vibration and imperceptible acoustic changes that herald their periodic animation with loud noises, rustles and synchronized air jets culminating in the sudden fall of darkness that immerses the visitor into an unexpected fluorescent nebula. Only then in fact we realize that the magnified stars made with calipers and the spears are part of a milky luminous universe that confuses and creates new unthinkable connections with those that at first glance seemed stand-alone devices. It is the triumph of memory and dream that when the day is silent manage to quell the workings of the human mind gently favoring the sinking of the logical infrastructure in which consciousness clings to imagine the infinite.

Gilberto Zorio. The artworks fluidify and fluctuate from one century to the following one.
December, 16 th – March, 16 th 2017
Galleria de’ Foscherari
Via Castiglione 2B Bologna 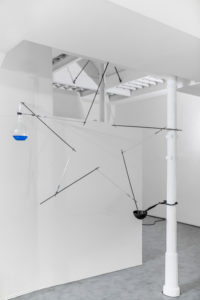 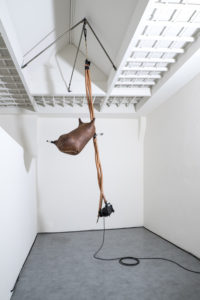 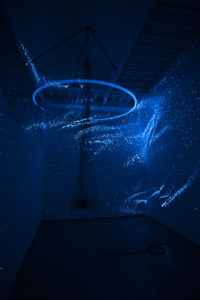