The reasons for painting. Univ..

Von Buren Contemporary presents the solo show Il Pianto del Vulcano, an exhibition dedicated to the work of the emerging artist Giuliano Macca, born in Noto, Sicily, and trained at the Academy of Fine Arts in Rome. From an early interest in Graffiti and Street Art, since 2016 the artist distinguished himself for his pictorial research and since 2018 he is represented by the gallery when still known as RvB Arts.

Dwelling on a series of paintings conceived between 2018 and 2020, the exhibition sets a sophisticated theatrical scene which, whilst evoking the solemn Baroque drama, translates into an illusionistic space. For his solo show, Macca decides to confront himself with the sublime image of the volcano by drawing personal references from the Sicilian landscape, notoriously characterized by strong visual contrasts which articulate between mountain heights, lava lands, and the surrounding sea. Macca focuses on the cultural and archetypal values and aof this founding image, always been considered as the native land for civilization, heroes, and myths, as he evokes through the dreamlike backgrounds and opaque atmospheres of his paintings. On the solemn and dramatic image of the volcano, the famous director, screenwriter and writer, Ferzan Özpetek, also proposes an interpretation that aims to reflect the fundamental traits of the artist’s poetics as seen in the critical text accompanying the exhibition. According to Özpetek: “[…] it is in his evocation of the weakness of the volcano, his loneliness, his tears, that Macca gives us a new and lacerating note. His subjects, as they bask in the waters at the foot of fiery mountains, are nothing more than the mirror of the fragility of a giant who may well be bursting with fire and fury, but in reality he is setting the stage for his own solitary death”.

The theatricality of Macca’s works translates and pours into his use of formal and expressive contrasts which overall cross the paintings on display like a fil rouge defining his pictorial style: just as the volcanic landscape of Sicily stands out for its evident visual contrasts, so the artist’s paintings distinguish themselves because of their feverish intuitions and luministic traits, almost evoking the dramatic perspectives and the luminism of the mannerist artist, Tintoretto. To introduce the exhibition is a series of portraits of ephemeral and evanescent figures resonating with a poetic tone – Di Illusioni si abbellirà il cammino; Come lava che non brucia; Il Destino – all reflecting the artist’s interest in human figures and representation. But, although the introspective interest in these portrayed subjects resonate vividly, Macca’s artistic fury makes these ephemeral apparitions turn towards the exterior, triggering a series of crossed gazes through anamorphic perspectives, angles and deconstruction of planes, overall reflecting an existential human condition. This message is remarked by the solemn deposition at the center of the pictorial scene, denoting the sacrificial and dramatic spirit of the exhibition and highlighting the artist’s faithful study of pictorial composition.

The tones, the expressive force, the chromatic choices, and the formal contrasts of Macca’s paintings light up more intensely in the second section of the exhibition where the theatrical and illusionistic dimension of his paintings recalls the image of the volcano by staging a personal interpretation of the cycle of life and death. The encounter with the painting Prima di Scomparire, sounds like a greeting to the existential condition achieved through sublime and poetic forms. This is in contrast with the dramatic condition of the painting that gives title to the exhibition Il Pianto del Vulcano, where the oxymoron which supports the poetics of the exhibition – the semantic association between a stream of lava and human tears – is performed as the highest dramatic act of this scene.

Here, Macca’s painting seems to free itself from references to the body and the figure by reaching the dimension of the myth, as suggested by the painting Il Sogno di Efesto, which dwells on aspects such as the gesture and the sign, as a stylistic citation to the myth of Vulcan, the Roman deity of fire, of metallurgy and sculpture. The existential and mythical journey of the artist ends with the sublime vision of the painting Paolo e Francesca, where the classic love myth is here portrayed here in a solemn and dominant pose, as an epitome for drama and passion given in a theatrical form and worthy of Francisco Goya’s painting.

Giuliano Macca’s painting is ambitious. This emerges vividly from his intuitive visions and from his feverish tones and contrasts. Macca’s narration is poetic and cultured as if the most interesting challenge for the artist, is to think of the present according to the canons of painting, myth and classicism. 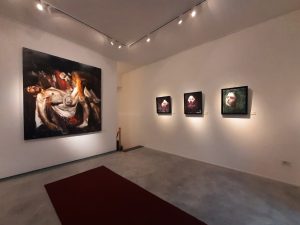 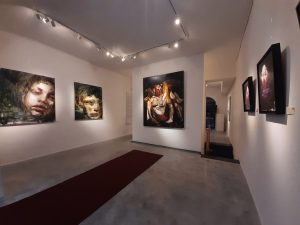 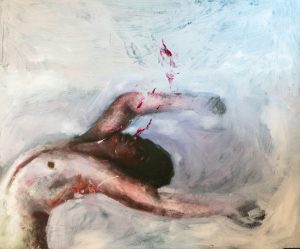 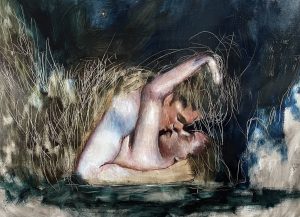