Jonas Mekas: Master of the Ind..

Armin Linke. The appearance of.. 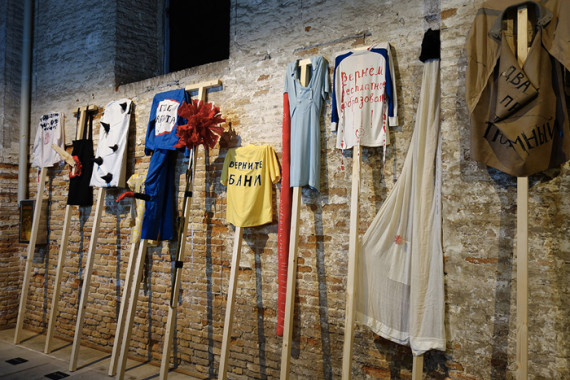 GALLLERIAPIÙ reopens the exhibition season with Utopian Unemployment Union of Bologna, solo show of the Russian artist Gluklya aka Natalia Pershina – Yakimanskaya who lives and works in St. Petersburg and Amsterdam. Founder along with Olga Egorova of the artistic girl group Factory of Found Clothes, she has focused her work on the critical reflection of the conflicts between the individual’s inner sphere and the cultural codes imposed by society and of the aesthetic and behavioral processes enshrining the marginalization of ethnic or political minorities in forced cohabitation situations. Engaged in bringing out the reasons of the weaker social strata ignored or opposed by a political authority that especially in Russia bases its power on the systematic repression of dissidents, explores the conceptual significance of clothes as a political manifesto and a resistance tool against cultural and gender stereotypes. Fascinated by the intimacy that the garments have with the body and with the personality of the wearer, the artist transforms them into connection tools between art and everyday life from which she brings forth meetings, workshops and performances that create new spaces of equality in where the personal lives of each participant are valued as pieces of the collective history. The aim is to experiment new ways of communication that go beyond the barriers of social divisions suggesting ideas of compatibility and mutual transformation to process a free cultural dialogue that transforms the places of institutionalized art into representative platforms of minority communities opposed by power systems.

In the installation Clothes for the Demonstration against false election of Vladimir Putin presented at the 56th Venice Biennale for example, Gluklya proposed a tragic parade of clothing used by demonstrators who protested in the streets against the election of the Russian President in 2011. The clothes, mounted on high wooden T shaped poles that evoked images of executions and hangings, were reworked by the artist with embroidered written repeating the slogans of the demonstrators and the insert of disturbing disjointed artificial limbs. These rebel personifications, vivified by the real memories of those who dared to break the inviolable aura of corrupt and violent power, make clear the delicate intersection between the public sphere, implicit aggregation factor in an oppositional sense, and the private one suggested by the different types of clothes giving body and voice to a universal protest of torn souls.

Art for Gluklya must be a vehicle for witness and freedom and has the mission to actively interfere with society tirelessly going into all its inherent contradictions to offer its utopian solutions as a germ of a real revolution of conscience. So the traveling work in progress Utopian Unemployment Union the artist arranges situations that allow the encounter between people belonging to a wealthy or elitist social group and other from a precarious and marginalized background. The creative collaboration explores the strategies of resistance and adaptation to external stretches that each group is facing every day and the subsequent identification in the other’s conditions brings new horizontal connections that restore the interrupted social fabric. The rediscovery of the deep human aspirations and concerns that animate people’s decisions and actions regardless of assumed role hierarchies suspends the conflict and the lack of communication to activate a resistance front against the interference of the social system in the lives of individuals.

The step of the project hosted by GALLLERIAPIÙ considers the economic and existential causes of unemployment in Bologna through a laboratory where immigrants, refugees and Academy students talk about their respective difficulties using clothes as a tool of collaboration and dialogue. Guided by the artist, the participants were questioned on living and working conditions that the city is able to offer its inhabitants in a Socratic process during which words exceeds the initial narrative intent to become thought, image and shared gesture. For Gluklya art must be a detonator of relationships that bring out the contradictions and unexpressed potential of a particular social microcosm and a litmus test in which “the precious gaze of the other” increases the individual awareness and returns a representation of reality that is at the time the same uniform and intimate. Then overcoming barriers of cultural divisions means discovering that the other has its deepest roots in the same human weakness from which desires and feelings rise, and that integration must start from the construction of a common dream that only cooperation and exchange can turn into an effective action. So the abused cliché that defines Bologna as the city of food and well-being is neutralized by a silent hunger strike performed by the group in a downtown restaurant, while the aporias inherent in this concept are overcome by the idea of ​​a multiethnic pastry whose signboard – Burqua Bread and Jam – suggests a hypothesis of actually feasible brand.

The words and drawings that emerged during the workshop had been reproduced by Gluklya on banners and conceptual clothes that subsequently installed in the gallery appear as objects-consciousness that invade space and thoughts with their diaphanous but inescapable ubiquity. Private stories and emotions of people who conceived them are sublimated in these minimalist shapes to offer themselves as  warning and disturbing thoughts and become the premise of a change that materializes their intuitions.From seven graphic tables made by the group Gluklya made seven screen printing frames that once acquired will give the collector the chance to reproduce printings for commercial purposes with the proviso to donate the proceeds to the online platform http://mda2016.wixsite.com/utopian-union through which funds for more long-term creative workshops for integration of refugees will be collected.Stronger than any mission statement, this project subverts the rules of the market by demonstrating how in Gluklya’s opinion art finds its meaning only in the difficult balance between poetic inspiration and ethical revolution and how its power of aggregation and invention can make immanent the aspiration to a more equitable society. 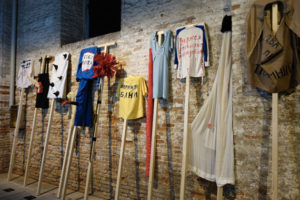 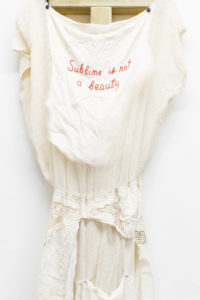 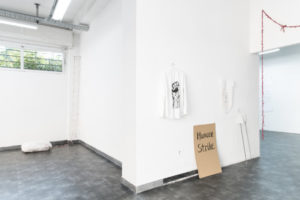 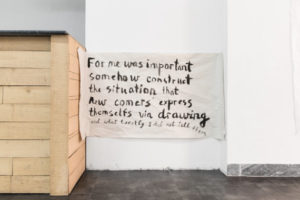 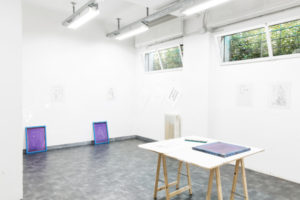 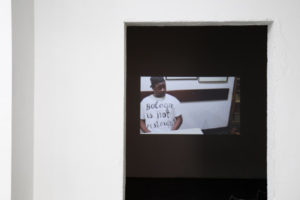