Belanger and Khatibi in Brusse..

Eastcontemporary is the independent space founded by Agnieszka Faferek and Julia Korzycka in 2020 in via Pecchio. Their aims is to present the artistic and cultural panorama of Central and Eastern Europe, crossing geographical borders, like disciplinary and social ones, to stimulate practices that expand the debate around the dichotomies of the globalized world. The public program Odds Against Tomorrow is a curatorial effort that explores the concept of future as a multi-level narrative. Eastcontemporary wants to arouse critical consciences capable of divergent and transitive readings. The schedule is conceived as a “space-time form”: a series of exhibitions, meetings and a publication for which they invited various authors to hypothesize futuristic landscapes, archaeo-futuristic universes where to reimagine ecosystems of meaning.

Holobiont Rhapsody is born from this desire to cross borders. Inaugurated on December 18 and open to visitors until January 30, it is the first dialogue between an Eastern European artist, Stach Szumski (Gdańsk, 1992), and an Italian one, Francesco Pacelli (Perugia, 1988). The term “holobiont” indicates a “host” organism and the associated communities of microorganisms that live in symbiosis with it. Bacteria and fungi are ancestral creatures invisible to us, but they exist with us and regulate entire ecosystems, creating symbiosis between all living beings. Precisely to this network of infinite symbiotic interactions refers the word “rhapsody”.

Stach Szumski‘s research explores various media, such as drawing, urban art, digital graphics, painting, sculpture, experimental music, installation and site-specific projects, inspired from practices related to post-graffiti, folkloric aesthetics, extinct alphabets and para-archaeological forms. At Eastcontemporary, the artist exposes The Issue of Office Bacteria, four monumental acrylic paintings (2×2 m). Their title reminds the opposition between the spasmodic cleaning of aseptic offices and the teeming vitality of the microorganisms that live there despite everything. Szumski paints powerful monochromatic images, monstrous forms, but according to the etymology of “monstrum” as a portentous or exceptional phenomenon. Entering in the white cube of via Pecchio, we experience the sensation of making a journey through time and space, transported by a panic dizziness towards unexplored territories. We find ourselves in ancestral black and white landscapes where organic forms coagulate, swirl and inflame the air, raised from a vivid and ravenous iconographic fantasy, in balance between familiarity and otherness.

In Francesco Pacelli’s works repeated semantic stratifications and a continue tension to material experimentation collaborate to probe the relationships of the human being with his evolutionary perspectives, between hybridizations and de-generations. The artist develops its interventions starting from a deep relationship with the place, aiming to structure immersive environments and experiences, in dialogue with the context, as in the case of Synthetic states of dissolution. Sinuous tongues of black sand, half natural soil, half synthetic seabed for aquariums, split the floor, invading the space and adapting to its architecture, as if they were a single living organism, a vibrant epidermis traversed by nerves, pores and fluids. On that, sprout small-undefined beings in glazed ceramic, with both organic and abstract shapes. These represent nothing, but are the result of an ambiguous yet plausible imaginary, from which they flow through an instinctive process of confrontation with the matter. They are “other” microorganisms, elusive and evocative, appeals to tangential perceptions to which each one can give his own biological or semantic definition. Ambiguity and plausibility are the coordinates within which Francesco Pacelli’s investigation moves. At Eastcontemporary, he stages a game of compositions and assemblages, as for three drawings executed with obsessive skill during the lockdown. These are inspired by a search among the prints of the digital archive of the Natural History Museum and structure hybrid figurative identities, half sponges and half animal ears, clear references to a faculty of “radar”, of absorption, sharpened from the silence and the emptiness of stimuli of the last spring. The artist establishes a participatory relationship with nature, whose iconographies crowd his ravenous imagination. Whether he distances himself from it by means of distortion or returns to it by analogy, Francesco Pacelli attributes an aesthetic form to the invisible, arriving at a dimension where his sculptures live independently from him and it is possible for us to go deeper, where our gaze is otherwise denied.

In the Reflections[1] Simone Weil writes: “Science is a monopoly […] the layman have access only to results, not to methods, they can only believe and not assimilate”. This exclusion from the real knowledge, according to the author, would be the cause of the generalized anxiety about a future perceived inevitable. In this moment of closure and fear, when science and politics are more like to unquestioning belief, Eastcontemporary, together with Stach Szumski and Francesco Pacelli, transforms its windows into magnifying glasses to encourage us to go further, to look further, towards alternatives possible that could renegotiate the terms of our present and, above all, of our tomorrow. 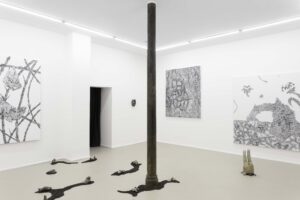 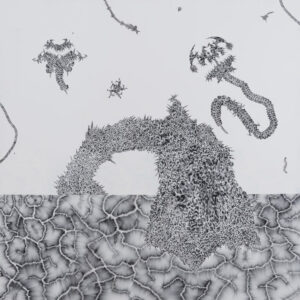 Stach Szumski, The Issue of Office Bacteria I, 2018, acrylic on canvas, 200 x 200 cm, courtesy of eastcontemporary and the artist 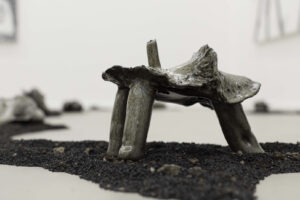 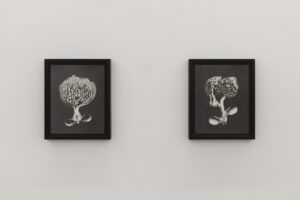