The Truth of the Labyrinth. Ma..

For the second edition of Foto/Industria, biennial exhibition dedicated to industrial photography promoted by the MAST in collaboration with the Municipality of Bologna, MAMbo presents the first Italian solo show by Hong Hao, Chinese artist born in 1965 originally from Beijing, represented by Pace Gallery.
In line with the main idea of the festival, which aims to be an observatory on the world of work in all its meanings and implications through the eyes of some of the leading international photographers, the artist analyzes and documents the recent expansion of consumerism in China in a series of works created as development of a meticulous project started in 2001.

At that time, Hao starts to regularly scan find or used items by placing them in a scanner, saving them in digital format and classifying the files in different folders on his computer to compose an endless virtual archive which records almost every material element of his daily life. The single images are then organized by form, color or type and, juxtaposed to one another, becoming the tiles of complex digital collages composing colored still lifes of great size. This process, which preserves the proportions of the objects but cancels their functional means, transforms the hyper-objectivity of the initial documentation in a deliberately undifferentiated and two-dimensional representation. Some images are thematic collections, like book spines, bases of small appliances or food wrappers, others reflect an abstract ordering principle, as the series dedicated to the circle, in other prevails the autobiographical component reflecting a specific moment of the artist’s life. From a stylistic point of view, the interpretation of forms evolves in a linear way, as can be seen by comparing the first assemblies, chaotic and yet ideally volumetric in the use of the overlapping, with the most recent works, in which every element seems to find its own placement establishing a relationship of mutual necessity with the contours of the neighboring objects which transform the juxtaposition in a symbiotic whole.

The obsession of making eternal his transitory goods does not express, as we might expect, a compulsive possession: this inventory patient is a practical of cooling where a visual diary becomes a form of accounting that in its repetition loses the initial private connotation to record the evolution of the Chinese consumers habits. Unlike photography, which requires a certain physical distance of the instrument from the object represented and the direct involvement of the author who expresses his subjective point of view, the electronic scanning visually flattens things returning them in a partial image but incontrovertibly objective. Through this process Hao dissolves the emotional bond that links him to “his belongings” to establish a critical and mental distance which becomes the precondition of a visual historicizing of the human condition in today’s consumer society. The growing need for material goods often unnecessary, which profoundly affects our mode of social participation, is in fact a result of specific political and economic strategies that transcend the individual to establish provisional balance of global coexistence. The attractive carpets of articles made by Hao, which bewilder the eye with a different and potentially infinite seriality as the increase of desire caused by the consumer system, prompts us to reflect on which extent our social needs are actually tricked and to ask ourselves what can be really essential.

The composition-arrangement becomes a form of meditation, ethics and aesthetics leading to the creation of a personal artistic vocabulary inserted into the dialectical development of the history of art. Ideal evolution of the famous crowdings of Arman, revealing the intimate principle of deformation of industrial facilities, Hao’s juxtapositions investigate the mutual compatibility of forms flattened by the digital reworking which generate the same mysterious expressiveness of the sculptural assemblages of the master of the Nouveau Realism. His ars combinatoria also explores new possibilities of inter-morphological and chromatic interaction of digitization, noting how in recent years the structural system of vision has evolved into an artificial flatness generated by horizontal additive systems at the base of programming codes. 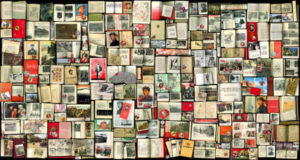 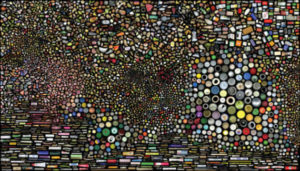