The Truth of the Labyrinth. Maria Rebecca Ballestr...

A Manifacture of Contemporary .. 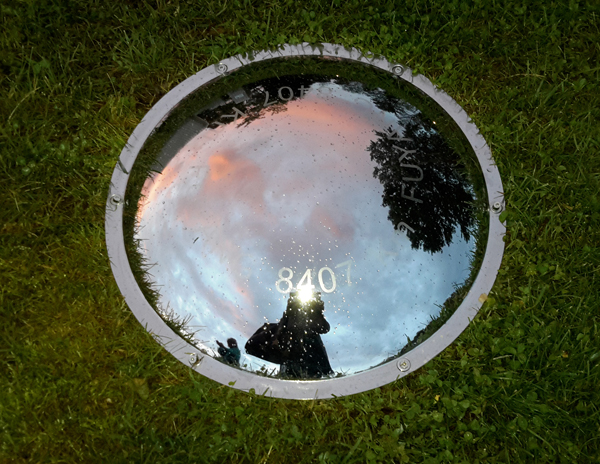 A shamanic journey to rediscover the bond that unites the living beings in a common destiny, an inner journey in search of a deeper awareness, an incentive to get lost exploring new connections of meaning, a philosophical text that invites contemplation and freedom of thought
and the challenge to enslave the conceptual tools of art to an existential meditation. The Truth of the Labyrinth is a project by Maria Rebecca Ballestra in 9 stages, conceived during his recent residency in Arizona focused on the experience of the wild and inspired by the homonymous texts’ s collection of the Belgian artist Julien Friedler. The prospect of the trip, always central to the work of Ballestra as a tool to understand and relativize cultural differences often at the root of the violent conflicts of interests that inflame our contemporary world, it becomes a starting point for addressing ancestral issues such as language, memory, sacred, death, the body, the immaterial and the overwhelming mystery of nature.

Accepting the invitation to contemplation of Friedler, according to which the perception of the vital forces that inhabit our planet is a necessary condition to establish a modern mythology founded on art, Ballestra turns his residency in the Sonora Desert in an itinerary of the soul conceptualized through the symbolism of the labyrinth. The first step explains her immediate disorientation in front of the uncontrollable and unpredictable Nature, the acceptance of her impotence and the overrun of her  mental barriers in the encounter with the sacred that pervades the most primal life forms. A labyrint of thorns then retrieves the cactus that according to O’odham Indians are guarding the ancestors’ souls, a whirl of feathers alludes to the crows that acquaint bears about the possible presence of prey, while a circular flourish of words refer to the linguistic maze with which man appoints things to extricate himself from the complexity of theprimeval indifferentiation. To the extent that reality is organized into preconceived categories, the identification of human beings with nature becomes more fragile: instead of recognizing part of it, man tends to act as a subject that relates to another that become an object of his actions and impulses.

To get in the game and to walk the labyrinth becomes a journey of initiation into its central black spot, Death, to return to being one with the Divine in all its manifestations and through underrated landscapes of the spirit. The main assumption of this regeneration is a radical resetting of the usual mental superstructures to rediscover the terrible beauty of the universe as it was celebrated by the American environmentalist poet John Robinson Jeffers, who defined his poetry with the term “inhumanism”. Inhumanism is the word that even Maria Rebecca Ballestra affects some naturally polished stones in a tacit warning to reflect on the transience of human actions in face of the persistence of a powerful and distant nature. Developing the implications of the metaphor of the labyrinth and exploring the possible landing places of naturalistic philosophy, the second stage of the project focuses on the virtual labyrinth of telematics information. By incorporating digital technology to the human nervous system, both unable to discern between simulacra and reality when they are linking the data at their disposal to build a network of meaning, the artist builds a modular wall tiles depicting a diagram of the brain synapses associated with some keywords. The connection, in perfect continuation of the pattern on each module, is actually interrupted by the space that separates each of them from the others, instilling doubt about its real effectiveness in generating an absolute truth.

From mazes even Italo Calvino, Roland Barthes and Jorge Luis Borges had been fascinated and the long conversations on the subject that he had with them have led Franco Maria Ricci to build one of bamboo plants in the park of Masone near Fontanellato. Paying homage to this fascinating natural architectural work, Maria Rebecca Ballestra proposes as the final stage of the show her personal labyrinth of bamboo and words. Bamboo canes, oriental symbol of spiritual growth for the perfection of their upward upsurge, are associated with some fragments of the poem Sulla Natura by Parmenides of Elea of the text La Vérité du Labyrinte by Friedler and a video in which Carl Gustav Jung speaks about God and death. Going deeper in Parmenidean distinction between absolute truth and fallacious opinion and in the paradox of the denial of the phenomenal and tangible world that it follows, the artist evokes the confusion, perplexity and loneliness of the man who perhaps will never fully understand the cyclical nature of life, the immanence of the Divine in the Universe and its eternity. 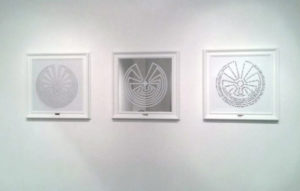 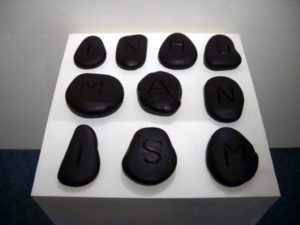 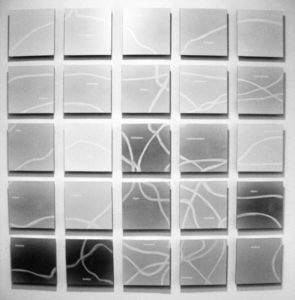