Since the graffiti in prehistoric caves, mankind has expressed through art its deep connection with nature. Initially it was elementary signs that responded to magical and religious needs, which over time evolved into more complex images. Nature has always nourished the collective imagination and inspired artists from all over the world with its inexhaustible archive of shapes, textures and chromatic ranges. Starting from the last century, nature in art has also recovered its mysterious character, it has become a refuge and a way to escape for the man who is oppressed by the frenzy of contemporary society, seeks in it secret correspondences with his/her own moods and a renewed sense of belonging to the life of the universe.

These spiritual instances have radically altered the pictorial depictions of the natural elements in the direction of an increasingly less realism. The artists havebegun to communicate their vision of the world through geometric lines, abstract shapes and colors so that a barely sketched shape or a hint of chromatic gradation were enough to bring out the naturalistic reference.

Many artists in their search for the lost unity between man and nature became interested in archaic cultures, which rejected a clear distinction between man and other beings. For the primitives,things had a soul or strength that gavethem life and the magic was based on the belief in “hidden connections” between all beings and therefore also between man and natural elements. To visually highlight these formal and symbolic affinities, painters who have favored an abstract language subject of nature worked toward a process of analysis and synthesis, at the end of this process, the canvas shows a new mental panorama in which nature is the manifestation of the inner perceptions of the artist in relation to the landscape, he/she is watching or imagining.

To this category belongs also Hoonaz Afaghi (1973, Tehran), an Iranian artist who, after an initial creative approach to the calligram, chose to gradually move away from the line to arrive at pure painting.

Her paintings, made with an opaque palette that incorporates all the animal and vegetal nuances present in nature, reveal the unique rule that regulates everything; which the Swiss painter Paul Klee (1879 – 1940) wrote in his Diaries. The silences and epiphanies evoked by her paintings lead the viewer to the discovery of that spirit, or vital principle, which lies latently beneath the surface of reality and which generates and governs human beings, animals, trees and mountains.

The privileged subjects of Hoonaz Afaghi are details of trees, rocks, leaves or animals in which the real visual data is decomposed and divided to reach the minimum and indivisible unity of matter and reach its essence, that universal soul of what exists on the life cycle painting is based. The artist mentally circum navigates the subject to be represented and analyzes all the parts to return it in a condensed image that goes beyond the concept of time, intended as a chronology of events to allude to an eternal simultaneity of dense moments.

In her compositions there is no distinction between figure and background and the acrylic color simulates everywhere the same indistinct organic paste of which the world is made. In some areas the chromatic layer appears to be stretched in a fluid way, while in others sit thickens in elaborate layers; sometimes it seems to expand freely on the pictorial support, sometimes instead its propagation appears governed by lines and contours that suggest enigmatic outlines of structures. The absence of sharp boundaries between the various elements that make up the vision and their metamorphic nature does not imply that the images are irresolute and poorly structured, but on the contrary manifest the awareness of a higher order that passes without interruption from one element to another. Emblematic in this regard are the paintings of the Tree series, where the tree-matter, indifferently understood as crown, leaf, wood, trunk, forest or branch, is investigated as if it were a primary mythological entity that overwhelms the human being with its luxuriant and multi-faceted beauty.

Just like Paul Klee; also Hoonaz Afaghi’s naturalistic painting is the most immediate way to express a determined Weltanschauung (idea of ​​the world), which would not be misleading to define animistic. Her symbiosis with the landscape is so accentuated that from the outside it is almost impossible to guess whether in her paintings the visual references to nature are to be interpreted as a metaphor for an existential condition or if instead human emotions are shaped by the depicted biomorphic scenarios.

The  constant search for chromatic harmony and formal balance (regardless of whether the vision has a calm, joyful connotationsa, melancholic or disturbing) demonstrates how at the basis of her poetics there is a cyclic and circular conception of life, in which each element settles down and transforms itself in relation to others. Particularly expressive in this regard is Disturbed, a brilliant essay in compendiary painting in which a few quick gestural brush strokes sketch an ambiguous silhouette of a woman in total fusion with the imaginary landscape that surrounds her, to the point that she herself seems to assume the appearance of a rock that stands proudly towards the sky despite the wind and snow.

And precisely by recalling the ancient intuition of all existance through artistic interpretation; creates a profound sense of liberation and pleasure that one feels by looking at Hoonaz Afaghi’s paintings, in which the inevitability of everything that happens on the canvas clears every hypothesis of conflict and regret. The depth of her observation, which is applied with the same intensity to the infinitely small as to the universal, makes it clear that abstract painting can be an instrument of spiritual research intimately connected with the ancestral forces that shape and perpetuate the mystery of life on the Earth. 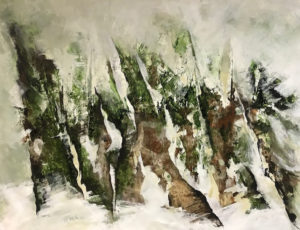 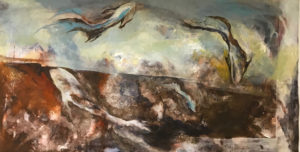 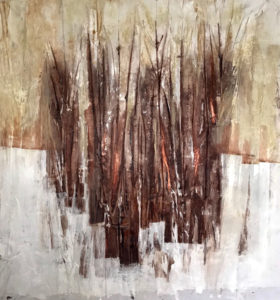 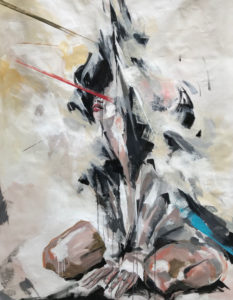