Luciano Marucci: Is the opening of the Nuova Accademia di Belle Arti in Rome the demonstration that, by expanding into other locations, the Institute aims to put in place programs connected to the territory in order to participate with renewed commitment in a collective cultural and social development?
Marco Scotini: Over the past few years, NABA has achieved a great amount in terms of both numbers and quality. Not only has it gone from two hundred to more than four thousand students, but it has established its name and is now seen as the pre-eminent school within the creative field. In particular, the Visual Arts Department (that I run), has positioned itself at an international level over time, despite its numerically small size. We’ve been the first to include curation in the study program and to broaden the teaching field to the entire contemporary art system with two-year courses, masters and seminars and the rotation of Hans Ulrich Obrist and Charles Esche, Ute Meta Bauer and Hou Hanru, WHW and Victor Misiano. One of the many episodes that comes to mind is when, during Documenta 13, Carolyn Christov-Bakargiev invited us to participate in the educational program as one of the best, international schools. Also, last year, the Boston MIT selected us, with four other great schools, to the Architectural Biennale in relation to the subject Art-Ecology. The choice of opening premises in Rome, in the historic Garbatella area, has been thought about for the past few years and is being achieved under the guidance of Galileo Global Education. It will not be part of any larger expansion for the time being. For us, Rome is extremely important because it is a city that complements Milan under many aspects and, together, they represent the epicenters of Italian culture. As an Art Academy, we have participated as leaders and have assisted in the recent, great transformation of Milan into a model of international, cultural growth. Let’s see what happens in Rome.

What projects in particular will materialize in the capital? There’s no doubt that an anti-academic academy was missing from the Roman environment…
Of course, NABA is not an academy in the usual sense of the word. This has been the case since its origins in 1980 when it aimed to invent itself as an alternative to Brera, immediately opening itself up to a plurality of subjects. However, the great leap forward was achieved during the last fifteen years when NABA moved from the Viale Zara (towards Monza) area to the historic Navigli quarter. Here it became a sort of international symbol of excellence. The Rome location is not considered as a branch of the Milan one but as something that is added and integrated at one and the same time, creating a mobility for students between the two locations. Naturally, Rome offers different opportunities with respect to Milan: advantages that will be applied, straight away, to the teaching values and training offers. Rome is the historic location of the great international Academies that hark back to the period of the Grand Tour so it will be important for us to take on board and accept the challenges that these presented.

Has the training offer already been defined or will this take place during the teaching journey? Will the choice of teaching staff be based on the quality and flexibility of the theoretical lines and practices of the three-year courses?
We have decided, in the meantime, to begin with three-year courses in Visual Arts, Communications and Graphic Design, Media and Fashion Design. We have left out Design (Product and Interior), with respect to our official program, due to the reduced presence of companies in this sector in Rome. Courses will start next October with the new academic year 2019-‘20. Despite our characteristically Milanese aspect, we’re still up for experimenting with everything. As a consequence, we’re not starting out with a pre-established plan to be exported and applied. This would end up being both reductive and ‘colonial’. Such an approach is very far from our intentions and we believe that the NABA premises in Rome will need to self-build within a precise context, beginning with a dialogue weth it. We’ll be playing on the differences, rather than the similarities, with respect to Milan.

Will the transdisciplinary approach that characterizes NABA be the platform for the various, future activities? Where will the students find the stimulus for a better creative expression?
As regards to the initial examples, NABA has multiplied and branched out the teaching offer and the disciplines within it. As just one example: far from considering an art school simply in terms of training artists, our department has opened up to publishing, to markets, to curation, to cultural mediation. We see the school not only as a place for learning but also as a production site so the most important, international professionals in the system must work side by side with our students. Today, the flexibility of measuring oneself over various fields is a prerequisite for every work and creative activity. The osmosis between the artist and the curator is at the heart of our two-year course and the correctness of this assumption has also been evidenced by the most recent appointment for Documenta 2022 where the curator is represented by a collective of Indonesian artists.

Does the professional learning that is acquired facilitate inclusion in the world of work?
I believe that two elements have always characterized us, at least within the field of the visual arts: the first is the fact of considering the academy as a production site that permits the student to operate, in real time, within the professional system. The second is the qualitative richness of the faculty and the visiting professors (if you think of figures such as Hito Steyerl, Trinh T. Minh-ha, Tim Rollins and the many others who have passed through here over the past ten years). Furthermore, a fundamental part for us, for the purposes of translating what we transmit in the classroom into practice, is collaboration with organizations and the realization of large projects. Specifically, the last chapter has seen us involved with two important projects in China on the occasion of the first Anren and the second Yinchuan Biennales. It is no coincidence that our ex-students are now amongst the artists either in the emergent Italian art scene or already established in it.

The collaboration with the MAXXI, from which the LA STRADA. Dove is crea il mondo exhibition derived, with performances by Adrian Paci, Massimo Bartolini and Lin Yilin, served to consolidate a prestigious synergy and revealed a reciprocal interest for the involvement of the public in many senses. Also, the pairing with the exhibition inside the museum structure – excellently curated by the artistic director Hou Hanru – as well as providing an original format, balanced out the ephemeral aspect of “street” interventions.
The idea of intervening at the MAXXI was thought up together with the artistic director Hou Hanru who has been part of the Visual Arts NABA Advisory Board for many years. It is also significant that we chose MAXXI as the first institution with whom to meet in our move to Rome. Adrian Paci’s performance, One and Twenty-One Chairs, enacted a ritual of hospitality by means of which students from Milan and from Rome met. Adrian Paci and Massimo Bartolini are two of the teachers on the B.A. and M.A. courses and are very important both nationally and internationally. Libera Improvvisazione by Giuseppe Chiari, a work produced at the Museo Pecci in the by now distant 1990, was re-proposed by Bartolini through a concert with a body of seventy musicians (professional and improvised) opened by an important pianist such as Giancarlo Cardini. But this was just the start. There are a great many other things being planned for the future. 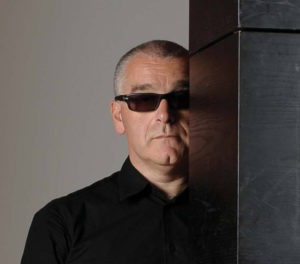 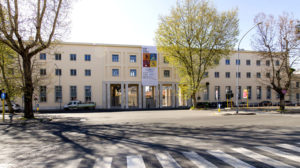 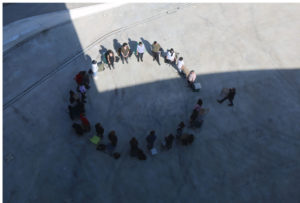 Adrian Paci “One and 21 Chairs”, a moment of the ‘convivial performance’ in the MAXXI square in Rome, where on March 21, 2019 each of those present had brought a chair (courtesy the Artist and NABA; ph F. Fioramonti) 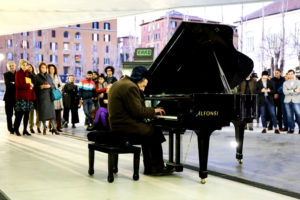 Massimo Bartolini “Free Improvisation” by Giuseppe Chiari performed in 1990, reenacted in the performance in front of MAXXI on March 21, 2019 with an orchestra of seventy professional musicians and improvisers (courtesy the Artist and NABA; ph F. Fioramonti) 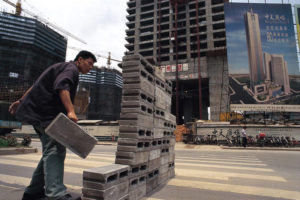 Lin Yilin “Safety Manœuvre across linhe Road” 1995, still from video exhibited in the show “THE STREET. Where the World is Made” ( “Interventions” section), MAXXI, Rome (courtesy the Artist and MAXXI) 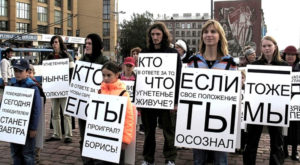 Chto Delat “Angry Sandwich People” 2006, still from video included in the exhibition “THE STREET. Where the World is Made” (“Streets Politics” section), MAXXI, Rome (courtesy the Artist, Kow Berlino and MAXXI)