In conversation with Simone Racheli

In conversation with Simone Racheli 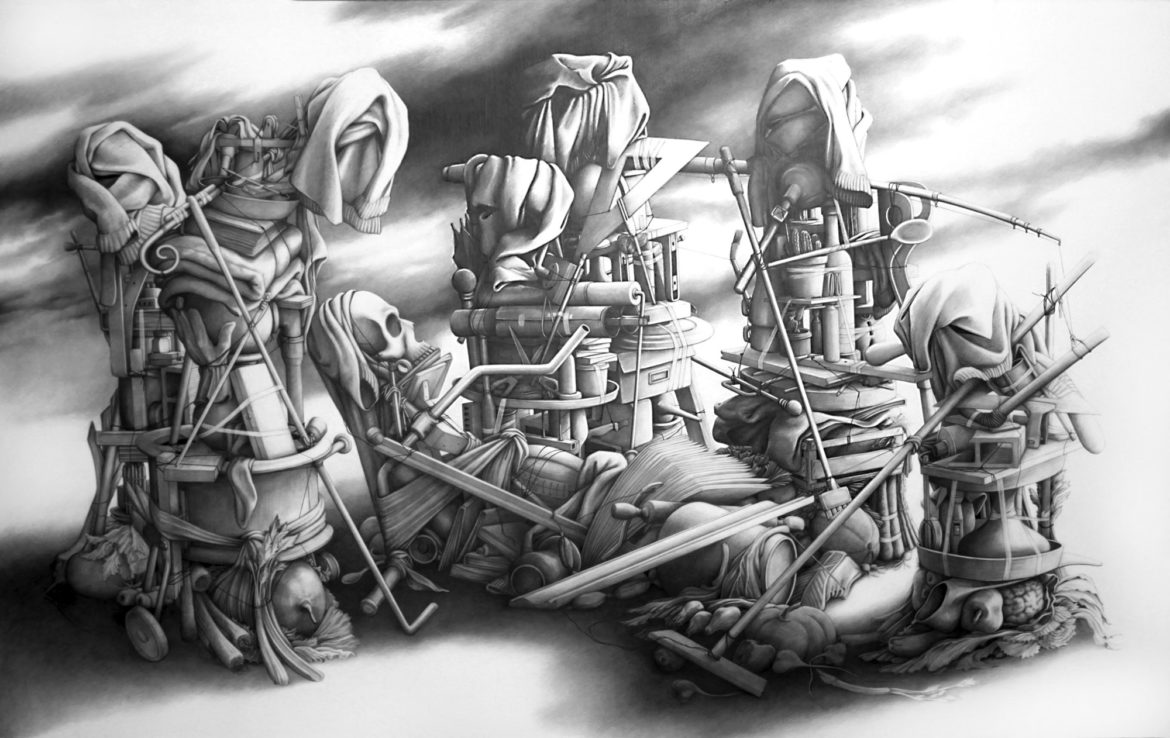 I wonder where your endogenous placenta was born from, the amniotic fluid within which you move more smoothly, as you often seem to manage painting, sculpting, drawing, performances and installations with the same level of confidence.
I use different languages because they help me to achieve likeness to reality. The mimetic process is a key to reproduce and bring out peculiarities; through them, I can better deliver the message. The layering of media and languages is useful to twist the meanings of things around, to distort clichés, in order to find possible alternative interpretations and make a parody out of them. Anyway, everything originates from the act of drawing, the immediate, primordial gesture, essential to conceiving an idea.

You gave a new shape and function to anything belonging to the domestic environment. You then moved on to the human body, towards its interior, creating improbable mechanical anatomies, with painting and sculpture blurring together to build a new reality. What meanings do you attribute to the body and the house?
My surgical attitude originates from the need to investigate “the human”; this implies a movement from the outside to the inside which penetrates the material. The human body and the house are both mass, places, containing space. They are both functional; the first created the second, its habitat. Therefore, the structure and the use of the two are similar; they both have spots where you can find mechanisms, entrances, exits, places where we host or temporarily hold our psychologies. The body contains the heart that keeps it alive. The house is animated by the body. In the body resides our identity; the house is the shelter where we show our other personalities. It is also a membrane between public and private, because it has walls which divide, an insensitive skin that muffles and makes the internal space intimate, like the mental one.
It is a space of transformation, because we introduce into it objects from the external humanity and then we enliven them through our personal sensitivity. We make them containers holding our day-to-day experience, affections, familiarity.
Within the house, the mind leaves the body, spreads and shapes its second, comfortable lump.
The body is the physical means by which we stay alive. The house is the private, inhabited shell, shaped by the human being to be by themselves.

How is drawing, painting and sculpting useful to the representation of reality?
In my research into manhood and its objects, I made use of both sculpture and drawing because they are techniques also used for scientific representations.
Through the simulation of reality, I reproduced fleshless items, recalling the ancient tradition of human plastination, where wax was used to preserve bodies. I descriptively represented the flesh tissues through sculpture, like an anatomical table and then I used drawing, instead, to mimic the sculptural volumes of the exposed material.
The idea of thoroughly depicting each anatomical detail is functional to easily shift the surreal, improbable object into reality, and therefore generate a short circuit.
The painting technique was invented to mimic reality, especially the one from imaginary. On the same surface more aspects of our reality are investigated: nature and human nature.
Paint subtracts weight from the mass, allowing us to make it float like in dreams and therefore becoming the best narrator of the human soul.

In the polyptych “The dusk” (2016) we can admire the fragile framework of modern life being shaken from underneath the burden of our daily residue. Can you tell me more about this work?
In the past I made a monumental sculpture entitled “Precarious Green” whose structure, with its unbalanced gathering of domestic items, seemed to challenge verticality and static laws. Later on, I realized the same subject by drawing and watercolour (The Erect Elects” and “Down to the Ground”). They all represent clumps conceived as standing objects, but their verticality inexorably succumbs to time. This surrender is present also in “The Dusk”. Therefore, the sunset is the exit of the sun from our stage, it is the tired light at the end of the day. I introduced colour to better convey the crepuscular density. This atmosphere reflects the thickness of the bodies, of the heaps of things. In fact, the whole results as a big mass (structure and single mechanism) cohesive like a hive society. All together, it takes part to the instinctive resistance against caducity, which lands on anything, exactly like the light. The shapes stand by themselves but support each other to stay strong, because their own weight, over time, wears them down; they are close to the fall, with their disintegration.
It is the human condition to be represented through the accumulation of belongings which define us. It mirrors an emotional state of uncertainty, resistance and resignation in front of the caducity of body and mind, which progressively cut themselves and deteriorate. Only one agglomerate that stands painstakingly to be fooled by the inescapable destiny of horizontality.

A thrill of sentences just half pronounced, interrupted, seems to accompany many of your works. In order to draft an existence subject to a possible dramatic change.
Everything is transformation, so many of my works mirror life caducity, they are like “vanitas still-lifes”. Life is like a bubble, like a subtle thread of voice or light in the darkness. Uncertainty and senselessness of life overwhelm us; they torture our psyche so that the latter must appeal to stratagems, those necessary integrations of sense for being alive. We have to justify ourselves for not falling into oblivion so we bring into these questionable justifications all human peculiarities, spirit, soul, body and species. We then build, produce, add to the world with the objective of enlarging and burdening our presence, setting it against time voraciousness.  Our psychological opposition to transience is so strong that, from that vacuum, we obtain a vital space to live in and rest after passing; this way, we manage to make sense again out of our existence in the present. A thread of hope for a possible enduring future, in the afterlife. The projection of the self to somewhere else is a salvific need; it is necessary but has an uncertain outcome, like unfinished sentences, interrupted by fear of death and of the unknown. We anesthetize and exorcize that constant thrill with abstruse diversions which eventually detach us from our conscience.

“Grey to the Horizon” is the last challenge, where you revisit an ideal place. This lost paradise, recalled through dust that settles so as to encompass its outlines, suggests that the aim is to attempt to control chaos.
Dust is disintegrated material, next to chaos and to the whole. Domestic dust is, in fact, lint which settles slowly, led by gravity, as if piloted into a space journey towards its original place. It lands smoothly and then organizes itself creating landscapes with elements of resemblance perhaps to that place once inhabited that is the lost paradise, where also the dusty memory of our bewilderment was deposited. I employ chaotic matter so as to reshape the shapeless and identify our earthbound condition. Coming back, reviving -one last attempt to snatch life from the jaws of death, to give orderliness again in a meaningful way- is equivalent to creating bodies, like golems. Matter like ours dissolves into chaos or goes towards that salvific place where it can stay in shape or a projection of it, defined space, inhabited place.
Like a demiurge, I transform dust into an image, garden and simulacrum, location of the final destination where to make the being lie. Like on the ground, it lies.

I like thinking of your research as a slow going forward, towards the interior. One can perceive the movement of your eye from the social development to the intimacy of the house passing through the body to linger into its depth. Is it correct to say that?
In the 90’s, which was at the beginning of my career, I was interested in media images, because it was a way to analyze and represent the surface of the social body, its skin. Mass-medias produce characters, commonplaces, diseases of society, a residue of morality and languages. Later on, I felt the need to observe the composition of this surface, the epidermis. So, I moved from the interest in the social fabric to the private one of the single individual. I got there through the objects, things that we want to take over, that we incorporate into that big domestic artefact, womb and theatre, where their interplay and animation take place. Eventually, we end up belonging to them, by loving them, giving them daily attentions. Each object unveils the reason for its creation showing its maker’s psychology. That’s why I dissected, inspected them, figuring out their similarity, unveiling their human investiture, the fact that they belong to us, makers. Objects are functional as much as man is functional to the human species, becoming in turn object themselves. By these shifts between subjects and objects, I highlighted breaks with reality, the ambivalence of the human matter and of the instability of the artefacts, bound to succumb to the wear of time. Eventually, I manipulated the disjointed material, the domestic dust, trying to give back shape and sense to chaos. This way, I attempt to bring out that feeling of insecurity which undermines us in the deep. 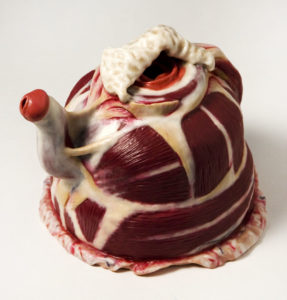 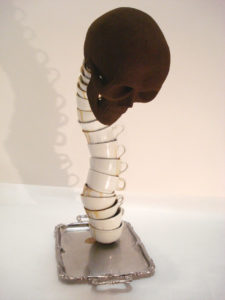 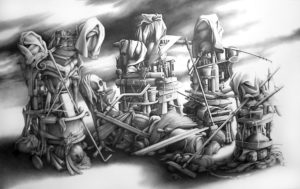 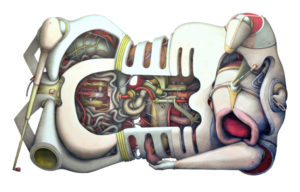 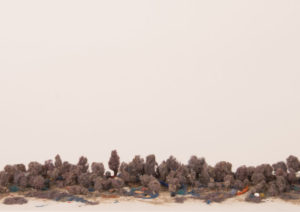