At La Galleria Nazionale, the exhibition Io Dico Io – I Say I addresses a transgenerational discussion on the role of Italian women artists through a feminist genealogy. At the center of the discourse are reflections from the archive of the famous feminist art critic Carla Lonzi (1931-1982), now bequeathed to the Gallery and available at: https://artsandculture.google.com/project/women-up. This leads to a discussion on female subjectivity through the form of portraits, in the words of the director Cristiana Collu, a discussion on the feminine as an ethical subject of the contemporary art scene. As stated by the curators Cecilia Canziani, Lara Conte and Paola Ugolini, the exhibition tackles fundamental issues on the role that feminism has played in the arts, in particular by addressing questions on the theme of the archive, the notion of female subjectivity in a system of relations and of appropriating a language that contributes to the construction of a discourse. In particular, as Ugolini points out during the visit, to revisit the work of Carla Lonzi is nowadays a necessity because by having unhinged the conventions of art criticism in the 1970s, Lonzi’s thought has contributed to rethink writing in a horizontal manner by letting the truth of the discourse emerging from the artists themselves. In so doing, Lonzi has positioned the art-critical discourse between the space inside and outside which connotates female subjectivity.

To welcome the viewer is the installation work by Marinella Senatore, Remember the first time you saw your name, 2020, which cites the feminist use of luminous materials and recontextualizes it in relation to traditions in order to suggest a choral reflection on the experience of making and perceiving the artistic practices of women. From here, the exhibition finds its roots in the work of women artists who in the 1960s and 1970s have significantly addressed questions concerning the condition of women by making their presence visible between the public and the private spheres. These are the main themes that underlie the video works by Giosetta Fioroni, Female solitude. Films with Rosanna Tofanelli Guerrini, 1967, by Laura Grisi, The Measuring of Time, 1969, and by Marisa Merz, La conta, 1967, alongside the most intimate works of Irma Blank, Breath, 1987, and Radical Writings, Schrift- Atem-Bild, 4-8-1992, 1992, which address a pictorial and performative action. These are themes that repeated in the contemporary context, influencing the work of artists such as Rossella Biscotti for her minimalist sculptural work On Walking, 2017.

A discourse on female subjectivity cannot ignore a discourse on sexual difference and the exhibition discusses this topic through the work of artists Carla Accardi, in Origine, 1976-2007, Suzanne Santoro, with Mount of Venus and Beyond, 1971, by Renata Boero, with UNIONE, 1977, and by Carol Rama, with Dorina, 1940, all in dialogue with the contemporary language of Monica Bonvicini for in Fleurs du Mal (pink), 2019. Overall, this results as a complex of works from which the voice of Lonzi emerges as if resonating with the Second Manifesto of Female Revolt of 1971, which alongside Longhi, saw the contribution of the journalist Elvira Banotti and the artist Carla Accardi, all active in Rome in the 1970s.

In a complementary way, the exhibition is a reflection on the female condition in ethical terms and this is evident in the ideal dialogue that finds correspondences between the work of Marisa Merz, Altalena per Bea, 1968, with the sensitive transcendental of Grazia Toderi for her immersive works Soup of eternity and sudden light, 1994 and Happy Birthday, 1992, which introduce the third wave of feminism in the 90s. By further referencing Lonzi’s text Self-portrait, 1969, the exhibition deals with female subjectivity through the genre of portraits as suggested by the work of Gea Casolaro, Lack of reflection (We are not but images in the eyes of others), 1994-2019, and of Ludovica Carbotta, Imitation 05, 2010-2011, which both discuss the impossibility of thinking about the feminine if not as a subject in relation with the Other through the space of language and words.

Further articulating in relation to the works on display for the Time is Out of Joint format conceived for the Gallery since 2016, the exhibition addresses a reflection on the role of female artists in social and political terms and this leads to discussions in relation to the museum, and urban and social spaces such as in the works by Ketty La Rocca, Installation with mirrors, 1967, and by Anna Raimondo, New frontiers of well-being of the vaginal ecosystem # 1, Rome, 2017, where the female presence becomes an active part of the social fabric.

It follows a reflection on the female body as suggested by Silvia Giambrone, with Il Danno, 2018, which introduces a discourse on representation. The shows discusses how for women artists, the question concerning representation requires to be understood in relation to the Other, as suggested by the work of Marzia Migliora, Quis contra nos # 05, 2017-2020, and further through the postcolonialist position of Alessandra Spranzi, in La donna bearuta # 17, 2000 , the ethical terms of Sabrina Mezzaqui, in I quaderni di Simone Weil, 2016, and through a posthuman perspective such as in the work of Benni Bosetto, Forss, 2021, overall establishing an evocative complex of genealogies.

It is an exhibition itinerary that further aims to investigate the archival dimension of artistic, critical and curatorial practices. As curator Cecilia Canziani remarks, an archive does not represent a closed system but it is rather a construction that should be understood by extension and this becomes evident in the series of paintings by Maria Morganti, Sedimentation 2014 # 9, 2005, which propose a visual rhetoric through reflections on time, the material and chromatic tones. This position is confirmed by Alessandra Spranzi who in Seven footprints of tables, 2020, re-appropriates archival practices to capture the subtle space of gestures and narrations through the photographic medium. It is confirmed by Chiara Camoni who in Sisters # 01, # 02, # 03, # 04, 2020, investigates the archive through the active function of her sculptures to perform a choral discourse as ideally voiced by women.

Not limited to the Italian context but open to the works of other feminist international artists such as Francesca Woodman, here presenting the work Untitled (from Swan Song series), Providence, Rhode Island, 1978, the exhibition Io Dico Io – I Say I, culminates with a section of materials from the archive of Carla Lonzi, where one can retrace her vision through a series of photographs, portraits, annotations, and texts, which also return the intellectual context in which Lonzi’s critical thought emerged in the late 1960s. It is an archive also influencing the present discourse on the arts, as evidenced by the series of virtual initiatives promoted by artists, critics, curators, as a corollary to the exhibition, along with other contributions of contemporary artists in response to the call Taci. Anzi, Parla. 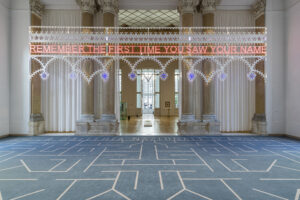 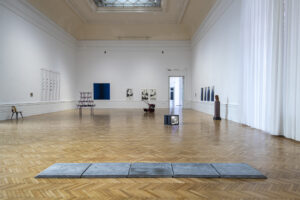 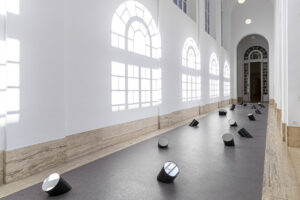 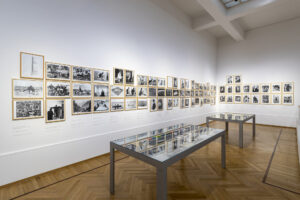 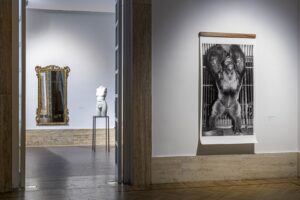 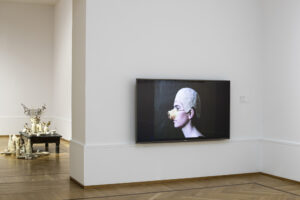 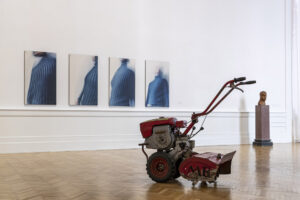