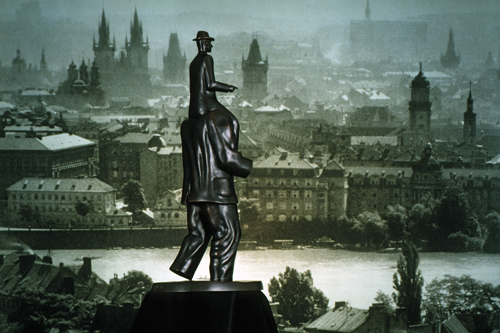 An excursion that lasts a decade: 1997-2017. The representation of the work of an artist who became known to the European artistic scene, especially since 1980, as a co-founder of the artistic group named Tvrdohlavì (Testadura). Jaroslav Róna, is the protagonist of an exhibition located at the Prague City Gallery The Stone Bell House. The exhibition, dedicated to the praguese artist will be open to the public until December 31st, 2017.
The atmosphere in there, is the typical of a long journey. Through the experimentation of his own ego along the past decade. The exhibited works of Jaroslav Róna, transmit the artistic evolution of this great painter and sculptor from 1997 until nowadays. The Avant-guard of his painting and the transition to sculpture, which he enjoyed considerable success from 1992-1994 with.

“Evil is a predominant in the world; God, as I imagine him, is not aware of evil”

This is the recurrent theme that warms up the blood of the spectator, who absorbed in this journey contemplation, through the work of an artist who cannot hide a strong influence of Orwellian motifs (Vertical Robots, 2013). These define the peculiar features of paintings from metaphysical post-apocalyptic compositions. The impression is of a powerful sense of nostalgia and danger that inspires, at the same time, anguish and non-belonging. The inner continuity that the Róna’s art grants to its spectator, develops constantly between the style of the myth and the archetype. As dictated by the artist’s words, evil has the supremacy in the world and God is the only way to escape this condition. However, he is not aware of it.

All of this, is an exclusion of the optimistic point of view of the world, amplifying the pessimism which the artist himself is an incurable representative of. The Franz Kafka Monument, is considered the highest representation of Róna, as well as the masterpiece from the sculptural work. This is the located in the Prague city center and dated 2003. Róna was inspired by a scene from Kafka’s novel Description of a struggle. This sculpture consists of a group of two male figures, the carrying one and the one being carried. The artist worked on the sculpture, following the purpose of creating a perfect synthesis of timeless figure, which still attracts considerable attention from citizens and foreigners.

It must be stressed that Róna has worked under two specific themes during the last ten years. Those themes have guided his artistic work both for painting and sculpture. The predominant accent can be noticed over African Seafarer (2011) and Heart of Darkness (2012). Both the consequence of Róna’s artistic heritage, represent the exemplification of the theme fantastically exotic. The second theme, mentioned above, comes from Orwellian influences and its own characters of science fiction, a classifying example is the work Vertical Robots (2013). The terrifying Orwellian influence, finds a remarkable expression also in the artist’s painting. The painting Great Incinerator (2008), where the constant use of dark colors, tending to purple and blue mixed and repeated, infuse a deep sense of anguish in the viewer.

Despite the predominant sense of pessimism, in Jaroslav Róna’s work, a weak positive-optimistic counterpart can be found. It is represented by painting composition that express pleasure in the play of colors and shapes. He expresses a sense of humorous and humanizing moment. Objectively, turns into consequences around his thought, mostly based on the idea of the predominance of evil on earth The knight and the Dragon (1995). Here the artist switches his own and original ego, depicting the theme of the victory of good on evil. 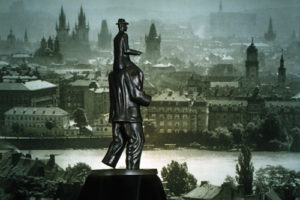 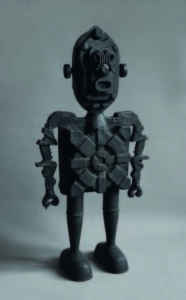