Giant Steps Are What You Take... 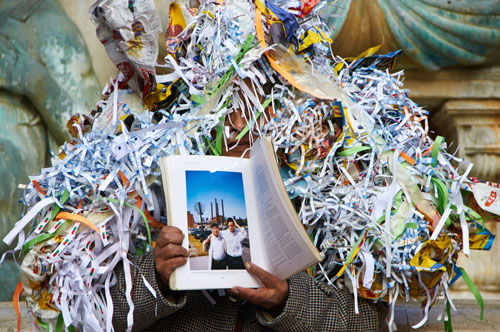 Between September and October David Medalla was a guest of the Galleria Enrico Astuni to prepare the exhibition Locus Solus. Homage to Arthur Rimbaud curated by Lorenzo Bruni, which opened on December 2nd. The artist has created especially for the gallery a new series of works conceived as a kind of interior diary in which the inspirations from the external world flow back.  Medalla, born in Manila in 1938 in the Philippines (now living in New York, London and Berlin) is a pioneer of kinetic art, Land Art, participatory art and live art. He is a citizen of the world, a traveler always in contact with different people and cultures and his lifestyle is deeply reflected in his work. Artistic creation is experienced as a continuous ferment of ideas that germinate in the emotional and physical space of the art work starting from the meticulous observation of the dynamics that govern the functioning of the real and their poetic transfiguration that involves the public in community actions through which simple experiences of daily life are re-read in a dreamlike and mythological way.

The series of watercolors on paper entitled Poetry and Memory are united by the themes of language, poetry and memory. Through quotations from writers (Raymond Roussel), poets (Henrich Heine) and philosophers (Friederich Nietzche) mixed with childhood memories Medalla, who is better known as a poet than a visual artist, wants to bring out the founding value of the word and its ability to make dream images, impressions, memories and real actions co-exist. In his drawings the tangled and sensitive sign subsides in a clear chromatic range dominated by pastel shades that make one imagine an archaic humanity still able to peacefully live with its own demons, a renewed golden age in which different times and places interpenetrate themselves in eternal synchronicity. So the young Leopardi is a blond boy finally free from physical deformities, lying softly on a hill near Bologna: while Apollo, Minerva, Hera and Neptune watch over his rest a honey collector stumbles on his way, overturning the precious load that leads on the shoulders in the lips of the poet who will return the sweetness in his verses. A Satyr-Apollo of Nietzschean memory that plays the lyre personifies the quintessence of lyric poetry according to Medalla, who quoting Heinrich Heine, describes it as a sweet and passionate music in the same way, a divine malice without which perfection does not exist. If the god and the satyr are only two manifestations of the same creative / destructive force, even the contradictory human epopee can generate founding myths of unexpected beauty, like the bombs exploded by a group of terrorists at the Luneta Park in Manila in 2000, whose craters in Medalla’s drawings become spontaneous planters in the summer season and incubator pools for tadpoles that will turn into frogs during the rainy period.

All the work of Medalla draws on a melting pot of suggestions that grow on themselves to feed the inexhaustible germination of vital forms that transpire from one expressive medium to another, reincarnating themselves with renewed innocence in different concepts and images. Since the ’80s his figures generate kinetic sculptures in which the graphic layout is strengthened in light paths that summarize the main lines of force of his thought, while the slight overlapping of signs that move the works on paper reappear in the sender ignition of the neon that blend the different phases of the image into a single vision. In M’Illumino d’Immenso, a tribute to Giuseppe Ungaretti, the poet appears as a Vitruvian man who restlessly agitates legs and arms walking on a wavy ground surrounded by verses, written in the sense of reading and on the contrary, which titled the work in ironic assonance with the real illumination of sculpture. In Self-Portrait with Dinosaur-Dante Medalla, who learned the Italian language when he was very young just reading the Divine Comedy, portrays himself as the Great Poet who appears endowed with the third eye on the forehead (oriental symbol of knowledge) and flanked by two dinosaurs who they alternately illuminate to symbolize the modernity of the ancient writer to whom the artist attributes the intuition that the earth and man are not at the center of everything, in opposition to the uncritical creationism that dominated medieval thought. What exists in the garden of ideas nurtured by art is true regardless of its verifiability, as implies Poetry and Memory (2017), a neon ceramic sculpture that recalls the postcard sent by Baghdad from Raymond Roussel to a Parisian friend in which he narrated the story of a man with a golden turban pushing a chariot pulled by a pony on which a beautiful androgynous figure was absorbed in reading a book.

Medalla has always conceived art as a process in continuous evolution and assimilated time to the score of this incessant transformation, as it is shown in the series A Stitch in Time, participatory works in which visitors are invited to embroider or apply personal items on thin cloths of tulle, modifying and constructing the structure of the work with a public performance in which each participant for the duration of the action is gathered in the solitude of his own personal psychological space. Since ’67 to nowadays the performance has been reactivated in galleries, museums and exhibitions all over the world, including the legendary Documenta 5 in 1972 curated by Harald Szeemann, until arriving this year at the exhibition “Viva Arte Viva” in the 57th Biennial from Venice. In A Stitch in Time, he identifies travel, time, chance as determinant entities in collective and individual destiny, suggesting at the same time the need to stop the flow of events and to “patch up” time to sediment it in narration and experience.

The power of randomness and the subversion of creative hierarchies return to The Sand Machine and Cloud Canyons (Bubble machines auto creative sculptures), process machines replicated with different variants responsible for producing footprint designs in the sand and foam sculptures for self-destruction that deny the aspiration to immortality usually associated with art in favor of a permanent provisional source of waiting and continuous amazement. Contemporary totems erected in memory of the past gesture now dissolved by time, these propitiatory devices for the future perpetuation of creation are tireless generators of organic forms that carry the same DNA as the world but are hatched and developed in the personal microcosm of the artist. The exhibition concludes with an installation dedicated to the main stages of Mondrian Fan Club, a surreal ironical epic saga inspired by Piet Mondriaan’s biography and legacy that since the early 90s David Medalla has continued with the Australian Adam Nankervis. The project, conceived as a series of sporadic meetings around the world between the two artists, consists of performances, short films, photographic impromptus and ephemeral urban interventions that pay homage to the founder of Modernism and celebrate art as free dissemination of creative energy that goes beyond the logic of the commercial system in which it is socially regimented. 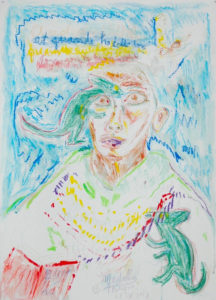 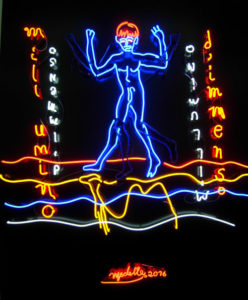 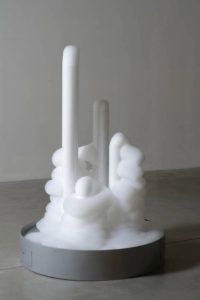 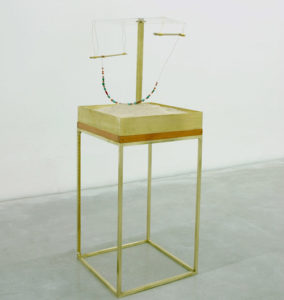 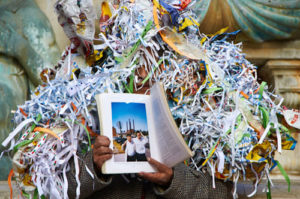