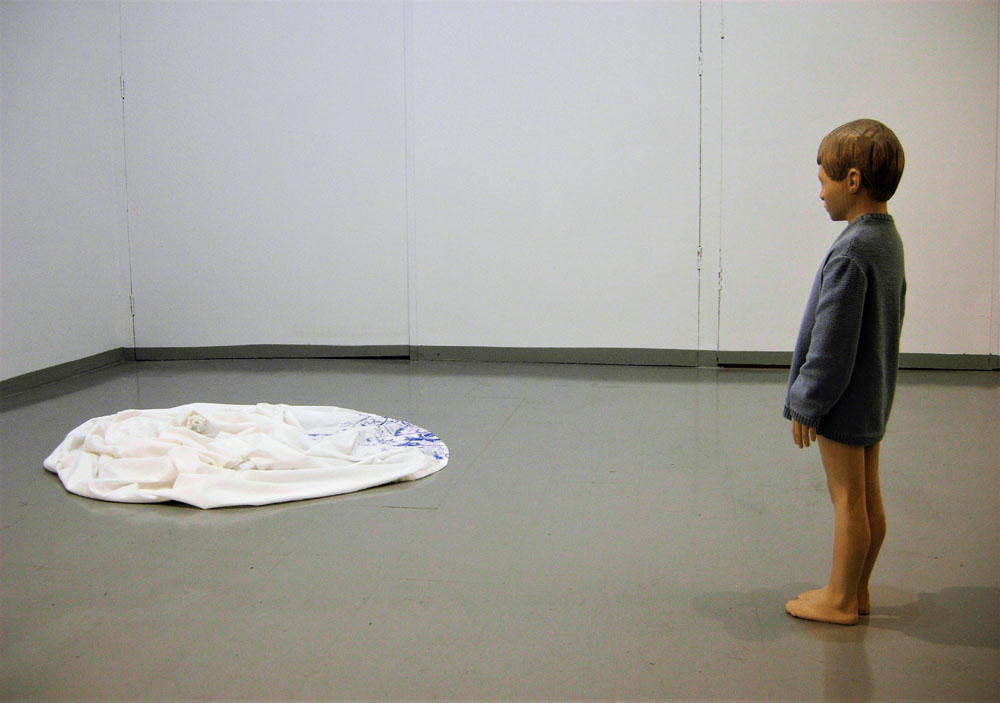 The Natural Traces exhibition at Isolo 17 Gallery proposes a suggestive immersion in a primordial nature, in which the human being appears as an indistinct metamorphic subject completely subjugated by mysterious generative forces. Zachari Logan’s drawings and Andreas Senoner’s sculptures bring us back to the mythical time of pagan spirituality in which the total symbiosis between man and nature was protected by the ancestral terror for its uncontrollable and sometimes capricious power. And looking beyond the first harmonious impression, even the works of the two artists manifest a complex range of contradictions and underground tensions that the sharp design and the essential shapes make it even more intriguing. In nature everything is a struggle, but contrary to what happens in the fratricidal wars that are leading mankind to self-destruction, this conflict is aimed at maintaining a higher order able to guarantee the coexistence and differentiation of all living species. Likewise, even the works of Logan and Senoner seem to capture the different stages of aggregation-disintegration of a body-form that struggles to emerge, exist and find space in a larger body that generates it and limits it at the same time.

The meticulous blue pencil drawings by Zachari Logan depict unusual compositions of flowers, leaves, insects and small berries from which protrude feet, arms, hands and other human organs that feed on the same sap that raises the plant elements. The starting point of this transmutation is the dismembered body of the artist which seems to regenerate and acquire a new unassailable resistance. If at the beginning of his career Logan used his physicality to talk about social and cultural conditioning, this series shows a moment of catharsis, the liberation that follows the introjection of the awareness that the human being belongs to nature and is a whole one with the land. The blue color of the design evokes an intermediate state of mind between sleep and wake in which rationality falls asleep and sensory perceptions become more intense and engaging. In a continuous metamorphosis, the fragmented body is absorbed by a luxuriant vegetation that welcomes it and engulfs it in its mysterious depths. If in these tables the human body becomes flower and fruit to fully identify itself with its own plant counterpart, in the pastel drawings on black paper of the Sleep Flowers and Lunar series there is no trace of its recognizability, as if in the moonlight the final fusion with the other sentient beings was completed. In fact, if we look at Levitate / Fall, a large design that ideally closes the series, we see that those nocturnal plant plots are nothing more than codes of floral growth inscribed in a larger human figure voluptuously abandoned to the swarming of the vital forces that cross it.

The South Tyrolean sculptor Andreas Senoner has always focused his research on the human figure carved in wood, occasionally covered with other organic materials such as feathers, fabrics, mosses and lichens. His characters are melancholy kuroi with their eyes wide open on unfathomable abysses of thought, absent and hieratic as idols but pervaded by the disarming fragility of sacrificial victims. The works on show present hybrid creatures that interpret different stages of osmosis between man and nature, whose potential reversibility is accentuated by the dual value of wood, which simultaneously represents itself and the flesh about to become wood. In these sculptures we feel a distant echo of the carefree cruelty of the metamorphoses told by classical mythology, in which man’s destiny was at the mercy of the unpredictable susceptibility of the gods. But in the ostentatious immobility of the Senoner’s creatures, we also understands that the ancient umbilical cord between man and nature has become so thin that it becomes a labile intuition that is barely felt in the dried lichens of a mane or in the artificially gaudy feathers of a boy-bird. The most intriguing aspect of these sculptures is their silent ambiguity: although the figure is extremely clear and linear, in fact, we never know with certainty what is happening in front of us. Will the wooden hand bristling with branches turn into a bush or are we looking at the incomplete roughing of a trunk that tries to preserve its structure while it becomes a hand? Are the feathers that envelop some characters a protection, an impediment, the consequence of an exemplary punishment or do they predict the popping of the wings that will make them free?

The mixed creatures by Logan and Senoner establish a compelling dialogue between their mental landscapes, that culminates at the end of the exhibition path in a suggestive four-handed installation in which we see one of Senoner’s children contemplate a Logan herbarium, in this case designed on a white canvas lying on the ground as if it were a disused garment that still retains the imprints of the body that enveloped. 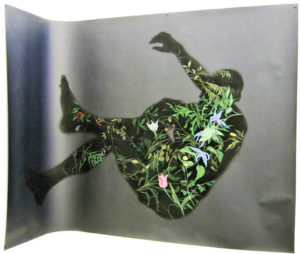 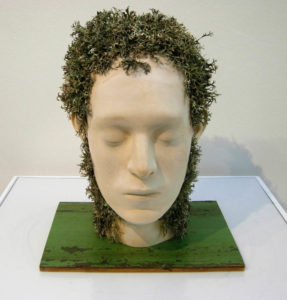 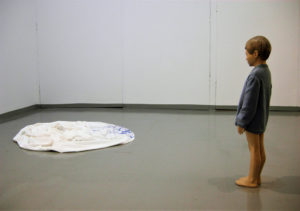