Death and Resurrection of the ..

Looking out I saw you – Cally Spooner at ZERO… Gal...

It is 7,30 p.m. and it is almost dark outside. I enter ZERO… Gallery and as much darkness wraps the first room that hosts the exhibition of artist Cally Spooner (Ascot, United Kingdom, 1983), Two Thousand Six Hundred and Seventy-Four Seconds Wide. Spooner’s work is a continuous research on the space and time of performance, implementing hidden temporalities that elude the normative and daily perception. In her artistic practice she combines in an unsynchronized way quotes, theoretical treatises, movies, pop songs or talk shows through live productions, film installations, choreographies and readings.
I see a light coming from outside that enters through the window open on the street, wanted by the artist herself, giving life to the room with a continuous movement due to the passage of some car or movement of air. However, everything is still, in space there are only three speakers, two benches and some pears on the ground. I approach the speaker positioned at the end of the room on a pedestal and I look at the shadows and lighting games coming from the open window until I hear a sound: the Prelude of Suite No. 1 in G major for solo cello by Bach plays and floods the whole room, the work’s title is Melody’s Warm Up, 2022. 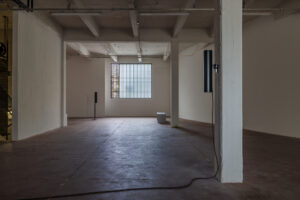 I look at the lights coming from the windows and I let myself be carried away by the melody, trying to resist the feeling of dancing, there, in the middle of the room, while a cello, played by the musician Melody Giron, plays one of the most known songs in the world. The music is conceived as a faithful reproduction of the symphony for which the artist wanted to modify the last measure by playing in reverse, in order to be in relation with the surrounding environment. This musical contraction allows to unhinge the normal scan of the score, giving it a new and dynamic identity. The sounds coming from the outside come predominantly within this darkness, dialoguing with the environment that surrounds it, making the sound experience never stable, as if there was no normativity of sound despite the score is perfectly executed. The cello intones the music and the outside dances with it. The vibrational scan of the melody produced by the cello welcomes the space and makes it recognizable in its constant and linear repetition. In this temporal suspension produced by the mingling of darkness and music, the melody suddenly stops, leaving only a continuous sound, a “beep” and automatic shots continually cleave the atmosphere every 42 seconds, completely changing the experience up to that moment and leaving a sense of disorientation. The chrono normativity that until a little before seemed what carried and joined, now it is what cuts, modifies, cleaves and mends. 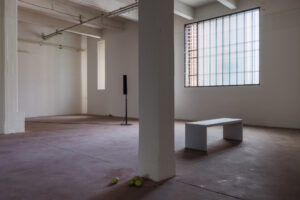 The new mode of listening and perceiving proposed by Spooner seems to combine the chrono normativity with the western concept for which time is linear and therefore organized around the categories of past, present and future. At the same time, this temporal orientation follows the linearity of labor in the capitalist era according to which repetitive and mechanical productivity on a large scale follows a straight and well-defined line, distorting time and reorganizing it into a productive function impacting on our perception of it. Time is therefore metaphorically linked to the history of capitalism, on which a precise economic and political model, such as that of neoliberalism, has developed. If the vibrational scan of the melody produced by the cello welcomes the space, it makes it recognizable in its constant and linear repetition, the temporal overturning put in place by the melodic change makes the possibility of rewriting time explode by reversing it in a parallel and discontinuous dimension. The disorientation caused by the 42 seconds thus becomes a form of re-appropriation of personal space and time, making itself the bearer of the repercussions in society of this precise non-linear feeling. The mechanical sounds also allude to the transformation of the work from the rigid preset model, as in the case of Bach’s melodic score, unfolding it to the new forms of use in which it is increasingly difficult to distinguish between leisure and productive time. The mechanical interruption thus becomes the archetype of unstructured and discontinuous time with which our bodies are led to interact, creating a new anachronistic symphony. 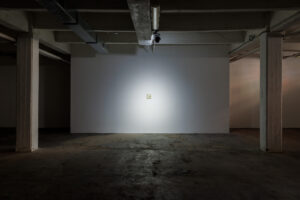 Spectators of this almost abstract composition are some pears, Still Life (2018), a pile on the floor leaning against the wall and another lying at the foot of a column in the gallery, looking towards the speaker, as if they were listening as well to the discontinuity happening. Spooner wanted to include them as an emblem of that perfect subject of maximum beauty typical of Seventeenth-century still lifes, in which the pictorial prowess was accompanied by the idealization of perfection. One of them seems unconscious, leaning against the wall as if the disorientation of the synchronic discontinuity had caused her a sudden faint. The others watch the scene, unarmed spectators and symbols of that unrealistic perfection of which even the melody is the bearer. Fainting is therefore the archetype of the discontinuity of that “beep”, something that apparently seems anachronistic but instead turns into a new possibility of perception, something that binds in its cut. 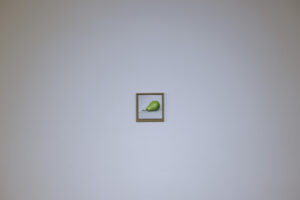 Going down the stairs that lead to the basement, here too the half-light is the protagonist, with the same speakers that reproduce Bach’s symphony and the mechanical sounds that leave everything waiting. Uncertainty is often presented as a problem of information that can be solved with the analysis of the data from which the information comes, but in resisting the wait and its resolution there is the real reversal of chrononormativity; we just have to stay. Then, a small painting depicting a pear, Fainted Pear (2022), appears majestic, alone and central on a wall of the room, illuminated by a spotlight, opposite to the “real” pears that instead lie in the penumbra. It looks like a sacred painting, a relic, something precious despite its small size. One almost has the feeling that it is forbidden to get close but can only look from a distance and this feeling is accentuated by the music that continues its dance in the shadows. This pear is made by Spooner in an almost hyperrealistic way, recalling that sense of beauty whose the pears upstairs were witnesses of. This pear, however, does not decay, but appears as a sacred body, a simulacrum of worship, occupying all the surrounding space together with music. If the real pears were the simulacrum of beauty and therefore also its device, the painted one is the symbol of that beauty, the essence of it but also its faithful reproduction, as in the case of technology which, by trying to imitate reality, exacerbates its forms and content. If the pear was unconscious, here it appears in all its majesty. It can be said that these fruits or the reproduction of them are not exactly still lifes, but that instead they are exasperatingly alive lifes.