I think life is not a closed sphere. There is a part that communicates with the outside, like in a glass. And the voices you hear are part of you, but also part of something else. (Ray Caesar)

The term “surreal” has now become part of the common language: in it, is identified everything that is fantastic, dreamlike, unusual and bizarre and that communicates with the unconscious and interiority, looking beyond the sensitive reality. In art, Surrealism is associated with the creative experiences of the historical avant-garde led by Andrè Breton, but in recent years a new artistic language has emerged from the shadow of the underground, which in a short time has been able to spread internationally, offering aesthetic results that draw strength and reason from the same motivations. More than just a simple artistic current, it is a real cultural movement, which has been around the world from Los Angeles in the 1990s: Pop Surrealism or Lowbrow is an art form that comes from underworld/below because it delves into niche scenarios, in contrast to official visual culture, but its acclaimed success today makes this art, which is an expression of it, an authorial phenomenon much appreciated by critics and collectors.

In perfect harmony with the surrealist roots of the 1930s, the exponents of this movement propose situations of mixing and continuous overlap between objective reality and an “other” reality, a parallel universe born from the hybridization between the recording of the real and its instinctive dream reworking. The painting proposed by the new surrealists explores the thoughts of the society in which it is formed and lives, it is an uncomfortable art left to itself, which pursues (and persecutes) the obsessions of a dystopian society. Within this current, on which at present no adequate critical documentation exists, different stylistic emphases can be identified, among which a markedly Dark declination, centered on the taste of the macabre and the morbid, on dark and grotesque atmospheres, on the absurdity and anarchy of contexts and logical links  stand out. The artists are involved in addressing ancestral existential themes in a distorted way, such as death, chaos, violence, catastrophes, neuroses and a crisis in the ego. They uncover the darkest part of existence, what lies beneath the threshold of perception, such as phobias, taboos linked to the body and nightmares, translated on the canvas into images of great tension.

The painting by the Iranian artist Mahjoob Zohourian (Shirvan, 1978) presents many points of tangency with these aspects, who, after having received the Master of Arts in Painting at the Faculty of Art and Architecture at the University of Tehran in 2016, was invited to numerous individual and collective exhibitions in the United States and in her home country. In her paintings the memories mix and blend indissolubly with the dreams and nightmares she used as a child: these dark fantasies show a parallel world very similar to ours, but in which we always perceive the presence of something strident and altered, placed upside down compared to what we expect it to be. Landscapes, bodies, animals, stories and objects projected onto abstract scenarios barely sketched by dramatic chiaroscuro, contrasts are not blurred and evanescent but seem to have the same consistency of a lucid dream, similar to a concrete experience, but constructed through unexpected links and juxtapositions.

The most recurrent subjects are human figures rendered monstrous by the expressionism of the sign and the color, enigmatic theatrical masks and dogs with a sweet and defenseless expression, almost always depicted in the role of victims. The attitudes of the female protagonists of the paintings are often provocative and extreme, their musculature and articulations fold into complex positions, they are animated by an almost macabre eroticism that generates in the viewer a conflicting reaction of attraction and repulsion. Mahjoob Zohourian’s painting could be defined as “apocalyptic” because of the sense of terror, powerlessness and loss with which the artist examines the destructive behavior of society and the consequences of human violence. The characters are almost mystical beings, messengers of other kingdoms who, incarnating themselves in visionary physiognomies of the fantastic metropolitan, hypothesize a possible contemporary surrealism with intense symbolic significance, as an expression of a transversal, polyvalent and contaminated epoch, where the real borders on disturbing virtual dimensions.

In the interspaces of the pictorial layers, real gaps towards elsewhere, new borderline demons are always lurking that owe their charm to their intimate relationship with the unknown, of which they radiate the underground energies. They are unpredictable and desecrating beings who impersonate the worst of human beings, as if painting for the artist was a ritualistic and superstitious action aimed at averting their presence in the real world. And the very confusing osmosis between reality and a fiction capable of operating on the possible through ways that are difficult to define, is the reason for the spasmodic sense of expectation and danger aroused by the visions of the artist, whose cryptic images evoke all the ghosts that inhabit our consciousness from the time of fairy tales onwards. If on the one hand painting emphasizes the abnormal aspect of existence, bringing its contradictions to their extreme consequences, on the other hand, it could also be a possibility to get out of the existential alienation in which contemporary man is enmeshed, if used as an instrument capable to open up to meanings that go beyond what is controlled, appropriate and granted. 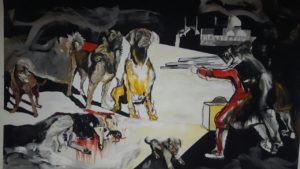 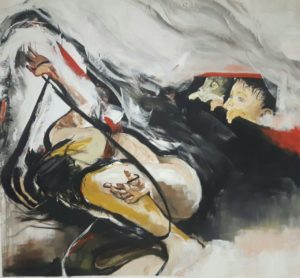 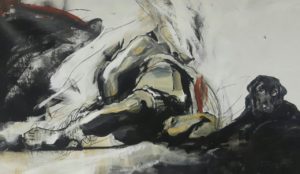 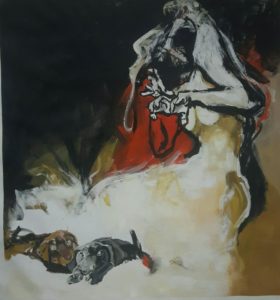