The fabric as art: Antonio Rat.. 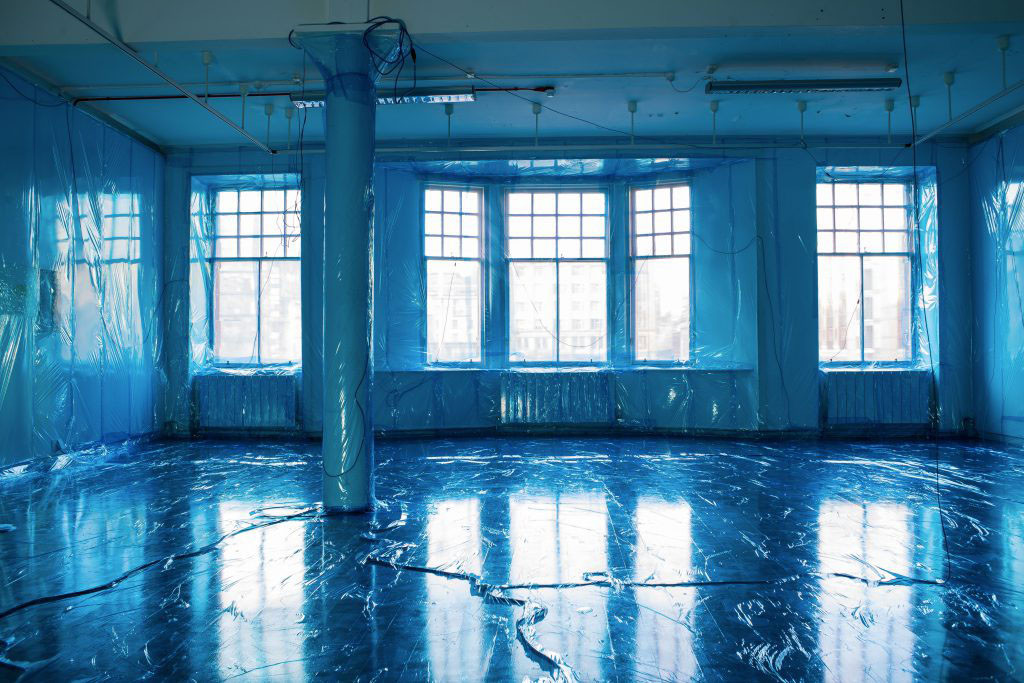 Marco Giordano is an artist, whose research pivots on anthropomorphic features and collaborative creation. He recently presented Pathetic Fallacy at Il Colorificio, Milan, as an installation consisting of LED plantation lights and five long silicone strings (Duuuude, 2017). The exhibition is open until December 17, 2017. I have a conversation with him in his studio in Glasgow.

Giulia Colletti: I would like to start our conversation by following the postulate Nature Abhors a Vacuum. Albeit with some variations, this statement discloses two factors coming out from your latest exhibition. The first is the assumption that nature could ‘abhor’ something, namely experiencing a human feeling. The second is related to your ability to escape vacuum, through a wise research on the space. You have succeeded in Cutis (2017) and more recently in Pathetic Phallacy, by creating an immersive ultraviolet installation.
M.G.: Pathetic Fallacy aims to recreate a state of mind, maintaining a relationship with the outside. The title echoes the literary expression coined by John Ruskin in Modern Painters. He refers to the attitude of attributing of human emotion to natural phenomena. I have used five long silicone strings, which might remind an intestine or other organic forms to emphasize the reference to anthropomorphism. I then wrote a short poetry The Room and The Wind (2017), which is accompanied by curator Stefano Collicelli Cagol’s critical text and the dystopic interview by Il Colorificio (Michele Bertolino, Bernardo Follini, Giulia Gregnanin). More than abhorring, Pathetic Fallacy is an installation provoking a perceptual discomfort in visitors, which Stefano has defined as ” the only organic subject tests of this artificial laboratory”.

G.C.: In The Natural Contract (1995), Michel Serres says, “For, as of today, the Earth is quaking anew: not because it shifts and moves in its restless, wise orbit, not because it is changing, from its deep plates to its envelope of air, but because it is being transformed by our doing”
M.G.: The limit of the Pathetic Fallacy consists in imposing human superstructures on natural agents. We objectify to exploit them and subjectify to acknowledge them. Reducing to knowledge leads us to familiarize but also colonize natural processes. We do it through the LED plantation lights, whose intensity can be adjusted according to agricultural purpose. This attitude might be defined as neurotic. We approach something we do not understand by proximity and distance. The schizophrenic agitation of Duuude way represents this form of attraction-repulsion. Originally, the writer Jonathan Periam uses the term ‘dude’ to pinpoint a ill-bred and ignorant, but ostentatious, man from the city. Nowadays, it is English slang for an individual whom we feel close to. I find this ‘elasticity’ of meaning relevant to the feeling of proximity-distance we experience while investigating organic and inorganic nature.

G.C.: Using an intuition of T.J. Demo, I would define your practice as intersectional, since your works do not give priority to just a contemplative experience within the gallery space, but they emerge from collaboration with visitors. I think of LifeisFullofSurprises (2016) or the most recent Self-fulfilling-ego (2017) that you have defined ‘processes in creation’. They emerge from a hodgepodge of perspectives by public you called on to trigger the artistic project.
M.G.: In particular, Self-fulfilling-ego turned out as a research process more than a piece of art. Earlier this year, John Heffernan – curator of the Jupiter Artland of Edinburgh – invited me to conceive an installation within the park surrounding the Bonnington House. Robert and Nicky Wilson purchased it in 1999 and today it is a contemporary art foundation. Although some invited artists have installed works within the environment, my intention was quite the opposite. I did not want to impose materiality to the space, rather provoking a reaction of nature to my installation. This has been made through a research process undertaken in collaboration with the two founders and the visitors.

G.C: Why this title?
M.G: A self-fulfilling prophecy is a prediction that somehow causes itself to become true. I re-framed this concept in the different stages of Belief, Thought, Behaviour, and Result, referring them to the Ego as state of consciousness. Following this process, I have asked a group of visitors – with no experience in drawing – to attend a painting session along with Robert and Nicky Wilson. On this occasion, the role of the two founders turned into an active participation, since they were at one time models and readers of the text The White Bird by John Berger. The Belief is therefore referred to the trust placed in a process whose development I could not foresee, but that would have determined itself.

G.C.: In The White Bird, there is a paragraph where John Berger describes the aesthetic emotion by identifying five qualities of the wooden birds that “when undifferentiated and perceived as a whole, provoke at least a momentary sense of being before a mystery”.
MG: For John Berger these qualities are figurative representation, symbolic representation, respect for the material used, formal unit and economy. In Self-fulfilling-ego I have metaphorically replaced them with physical features of the two founders I asked visitors to represent: eyes, mouth, hair, nose, ears. I post-worked on visitors’ drawings, reproducing them on sculpture. This stage turned out to be a state of Thought, where I experimented with different materials I did not know how they would match each other. By the way of example, I employed seeds to recreate hair. When few weeks ago I came back to Jupiter, those seeds are almost all sprouted. It’s an unfinished process; a Behaviour that is carried by someone or something outside of my ego but that comes back to me and to the public. Visitors cross the entrance boulevard and are invested by the water vapor (triggered by a motion sensor) that sculptures emanate. I have decided to conclude the process with a publication, a Result that somehow binds to the initial reading session.

G.C.: It seems to me that your work plays with a tension between ephemeral and lasting, investigating the line between ownership and authorship in a performative way. It is defined as a collaborative process that connects you to the visitor, making it the true catalyst of the piece. Reversing the order of the roles, the result is different from time to time. And this seems to happen during your last residency at the CCA Center for Contemporary Arts in Glasgow.
M.G.: The residence at CCA was an occasion to emphasize the relationship with the public and to focus that sense of spontaneity coming from the ‘re-production’. I left the door of my studio open with the intention of welcoming as many visitors as possible and offering them linguistic and visual exchanges. I asked them to make a collage that would play with one of the English coordinating conjunction, sometimes translated by the visitors themselves. The design has been completely unexpected. My answer to their commitment was to reproduce these works on banners, sewing and linking one conjunction to another. Connecting the connectors was the pivot of our relationship. My willing to learn how to sew turned to be a form of interaction: I became an amateur of my own work, driven by no previous experience but only the process. 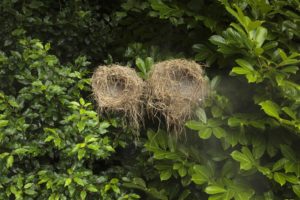 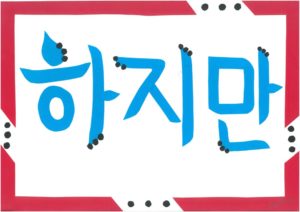 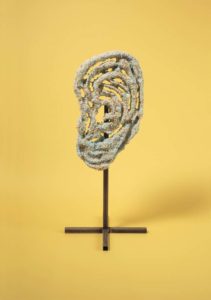 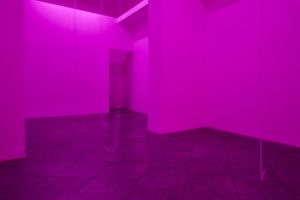 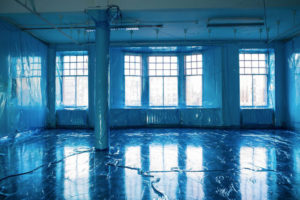 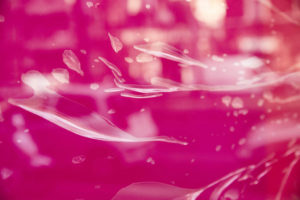