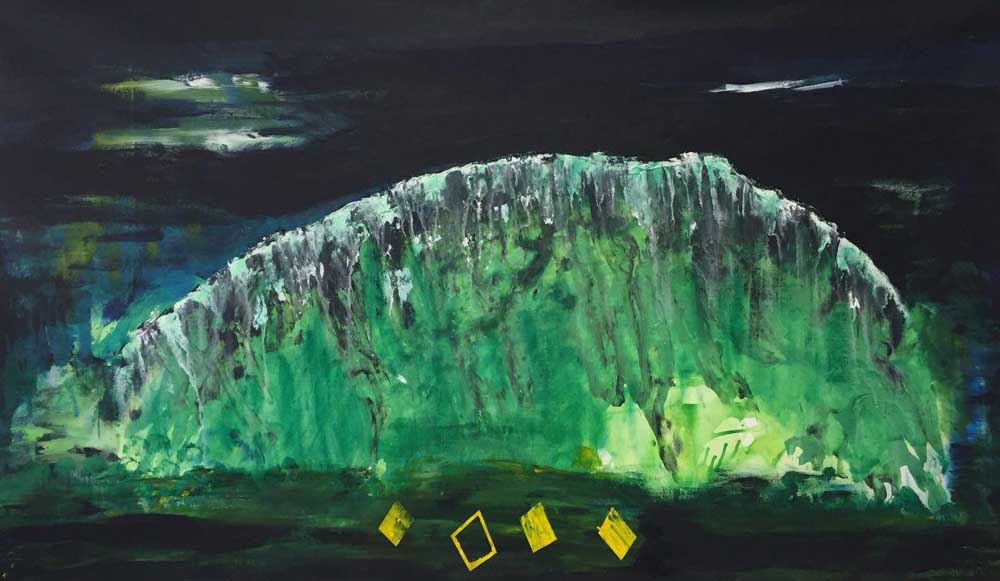 Iran is one of the world’s most mountainous countries. A country with a dominant mountainous landscape, vast plateau and the mountains surrounded by watersheds and plains. The northern part of the country is covered with dense rainforests while the main features of its central and southern parts are the steppes and semi-arid areas that lead to the desert.  A vast desert with spots of salt marsh. This contradictory and often hostile environment towards human survival is the origin of mythologies and legends that are contributed to interwoven centuries with great historical truths and to the identity and character of this ancient and refined civilization rooted in their homeland.

The main inspiration for Sadaf Kobari, the Iranian artist, is the glory of the nature that is itself under the command and control of the temporary balance of forces that are continually changing in order to seasons changing, winds and tides. In her paintings, the artist turns many spectacular landscapes of her land into abstract and impressive ones. Each image focuses on a specific color spectrum that evokes a certain natural scene to mind while the brush strokes and the traces overlaps indicate some forms that rarely represent the figurative calque that can be helpful to guess the starting point. The compositions of these paintings consist of a coordinated companion of the artist’s determined moves, indicating her initial visual designs. The slip of the psychic colors interacting with the gradual changes in light and materials and the brush local rubbing and dropping are imitations of the texture of rocks, waves, plants, foliage, flowers, and other environmental elements that lose their descriptive value and become pure image inspirations. In these paintings, the intrinsic attraction of the cyclic changes of life and death governing any form of existence on earth will be realized by very bright and contrast penumbra, or with the alternation of the areas drowned in the early darkness. The areas that are themselves pregnant with glamorous forms of look or a sudden explosion of colors in which the heat of life presents itself to integrity before it is absorbed into the mysterious depths of this earthly world, which is the origin of everything.

The effect of these paintings is appealing. Looking at them, human sees his subconscious as an only passenger who gropes in the bushes which are massive but bright from the light rays making a way through the leaves and trees; or as a sailor who tries to guess his route from the moon and stars status; or as a climber who considers the rock wall hardship carefully before moving forward; or like a lost caravan in a sea of heterogeneous sand hills that can hardly distinguish the reality from the mirage. Lack of details makes the spectator tempted to move his vision and imagination aimlessly into every motif that flows from one color to another, to create constant new adventures. Though, this is not the main purpose of engaging with these artworks. In fact, the audience is amazed at these paintings by paying more attention to them and feels that perhaps these picturesque landscapes are not just a window towards a strange and refined world, but their amalgam of colors has a mysterious and precise harmony with the most complex contortion of our unconscious. The subject of these paintings is not just simple illustrative sketches and transient psychic moods, but awareness of the fact that human being is made up of elements that make the world. And his life is linked to the eternal rhythms that offer immortality to his existence. The repeated integration of monochromatic and two-dimensional geometric elements emphasizes the conceptual and not the sensory nature of these images. The images that are aligned, like the camouflage painting style, in such a way that they look like ambiguous signs of the color and shape avoidance from the boundaries of the parallel dimensions.

Thus, the transformation of nature and the temporary accumulation of these changes in the beating cores of colors and the movement of Sadaf Kobari’s hands lose the unstable constructive nature of the transition to take on the ancient values of universal patterns that reflect the multifaceted privacy of the human soul. The gradual movement of the world relies on the continuous flow of probabilities that arise from their interdependence as well as from human being, although human being who puts himself in contrast to the marvelous order of creation as well to show himself as an independent and dominant entity, is a part of the whole of this perspective that surrounds him. For this artist, recognizing her identity in nature in order to absorb peace and thought lucidity is a practice for self-awareness that derives from the necessity of how to be present in the world; a presence that will occur through constant and conscious intuition and recognizing differences and searching for balance. In this broad concept, nature involves the universe and the whole material world. And if this awareness is the background of our understanding and communication with others, human behavior will ultimately connect with the natural flow of life. Therefore, apparently, these introverted artworks, as slowly as the creation of the inspirational landscapes of these paintings, reveal themselves to someone whose sensitivity is so high that he can coordinate with them. These paintings are a clear message of peace and harmony that maybe no words can express these concepts with such clarity. 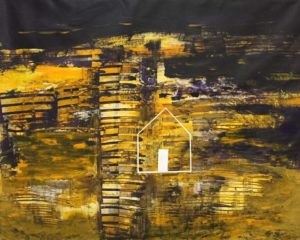 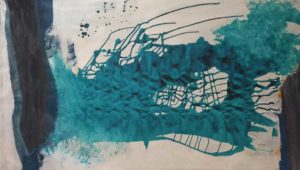 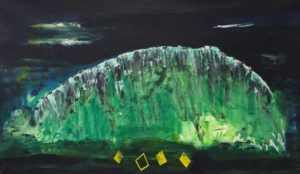 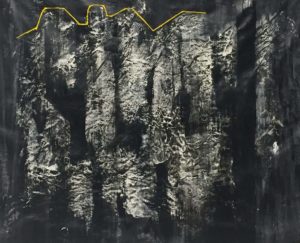 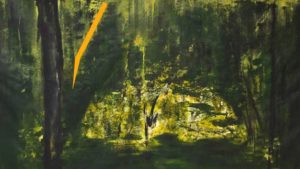 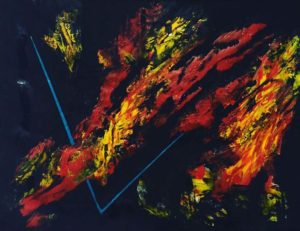