The human perception of one’s physicality is so acute and visceral that the slightest figurative hint of a body can trigger recognition and identification. In the course of art history a large group of painters from different generations, such as Peter Paul Rubens, Titian, Willem de Kooning, Francis Bacon, Lucien Freud and Jenny Saville have dismembered and objectified the body to bring out the truth of the flesh, a ductile and unstable matter on which the deepest instincts of the human being are imprinted. The interest in the “imperfections” of the body, with all the implications and taboos that still affect its social acceptability, is exceptionally topical in our hedonistic contemporaneity which tends to homologate the body according to pre-established aesthetic canons normalizing its subversive and erotic charge in artificially perfect images.

The theme of the body becomes shocking and compelling again through the brush of Maryam Moghadam (Tehran, 1984), whose series of paintings entitled Body (2016-2019) focuses on the human figure, in particular, the female figure, caught by deforming angles and depicted as an intrinsically expressive and vital conglomerate of flesh, in constant metamorphosis. The cycle, recently the protagonist of one of her shows at the Idea Gallery in Tehran, which was sold out in just over 10 days, was thus described by the Iranian critic Arash Soltanali: “Bodies in Maryam Moghadam’s paintings have fallen into despair and even look humiliated, yet at the same time looking into her drawings, they still look powerful and magnificent. Humans that are glorious out of despair”.

Her representations of the different transitional states of the body transcend the boundaries of both classical figuration and modern abstraction to explore the seemingly infinite ways in which the flesh can be transformed and disfigured. The acrylic painting, applied in adhesive layers, becomes visceral like the flesh itself, every painted sign vibrates flexible and mobile, the lines of force multiply and make the boundaries of the figure uncertain. As the artist mixes, smears and drips the pigment on her large canvases, the distinctions between living and breathing bodies and their painted representations begin to collapse and the image itself becomes human material: the figures appear painfully vivisected from a merciless look, sharp brush strokes pierce their surfaces, and each body protrudes parts of itself proudly autonomous and voluminous. The only element that is always hidden is the face of the portrayed subject as if to eliminate any misunderstanding that could hinder the complete identification of the soul with meat.

For Maryam Moghadam, the body is a metaphor for existence, represented as a war scenario in which the primary impulse for survival emerges as innocent violence or as a painful surrender of a wounded beast that retreats into its lair to heal itself. The canvases of the young Iranian artist can make one uncomfortable. It is difficult to look at one of them without perceiving her almost animalistic figurative instinct that also in the abstraction remains gripped by life, the fragility of the body, and its incredible resilience. The consummation of the figure, which becomes partial and monstrous, affected by disintegration, gives us access to a different and feral beauty, a direct expression of the abyss in which life and death originate in a relationship of absolute complementarity, such as two inseparable and unthinkable elements on their own.

Those of Maryam Moghadam’s paintings are crude and disturbing portraits of emotional nakedness that manifests the darker tensions of the characters left to fend for themselves, devoid of faces and, therefore, also of the mask with which they usually present themselves to the outside world. With the limbs tangled in an alcove that could also be the indistinct setting of a dream or a fleeting memory, they offer themselves with arrogance to the viewer’s indiscreet gaze, establishing through their exposed flesh an intimacy that goes beyond the erotic implication to move on the existential level. The artist represents those bodies by isolating them; she is not interested in the narrative aspect of the figuration, in the possible stories that subjects might suggest, and also the surrounding environment becomes relative. The body represents all that each of us possesses. It is an almost theatrical entity in which life experiences leave permanent marks. The transfiguration of the forms in a rugged amalgam of lines and colors invites the viewer to undress any reticence to face his inner demons with the awareness of not being alone, of having the same flesh and the same blood of the characters on the canvas.

The body is opulent or emaciated, heavy, distorted, flaccid, fragmented, and isolated. It is an anguished or tender presence, aggressive or exhausted, but always terribly sincere. The artist’s emotional involvement is total and stems from her almost physical need to emotionally penetrate the subject, to adhere to its discomfort, to exude its anxieties with an exploratory attitude that goes far beyond realism. If this painting does not offer a reassuring image of humanity, it is undoubtedly honest, and the loving insistence on the traces that pain and difficulties give to women’s bodies also emphasizes their inner strength, their ability to stand up, and hope in the possibility of a change. The women of Maryam Moghadam are strong victims; their existential shipwreck is only a temporary retreat in themselves to draw on the roots of their atavistic resistance and prepare themselves again to face what destiny has in store for them. For this reason, painting for the artist is a profound act of trust in a humanity that is still capable of empathy and understanding and of relying on art as a tool to express what counts, and that too often remains unheard in a productive society. Celebrating the corporeality lived without preconceptions, conventions, and hypocrisies could be the omen of a renewed humanism founded on aesthetic canons that can enhance the beauty of individual diversity that makes the adventure of the human being in the world so fascinating. 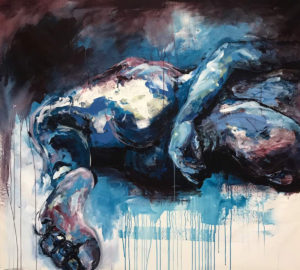 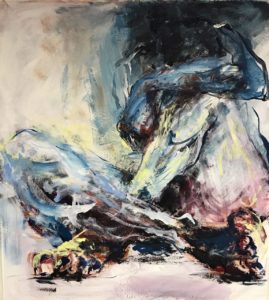 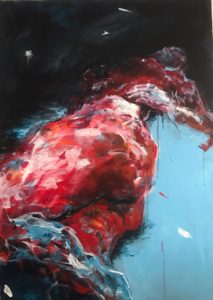