Mona Hatoum was born in Beirut, Lebanon, in 1952 and she lives in London since 1975. Her artistic career began in the eighties making videos and performances. Later she started making large installations, aiming to engage the viewer and provoke mixed feelings of desire and repulsion, fascination and fear. These are works, made with recycled materials or based on everyday objects, reassembled and enlarged (such as chairs, beds, kitchen utensils) that take on new life, transform themselves to become threatening, disconcerting and alien bodies from our primary knowledge.

These installations, sculptures or site-specific interventions want to have a minimum of aesthetic value and do not respond, by choice, to a self-referential language: this means that it is often difficult to recognize or link one of her works to his name, although they want to be powerful in the message. If we look for ancestry, in a very light way, we could speak of post-minimalism and environment, but not all of her works respond to this typology. For example, the grater enlarged as an indoor screen (“Greater Divide” from 2002), rather than responding to a minimalist request, seems to have the connotations of a neo-pop work, in the manner of the giant pickaxe made by Oldenburg for Documenta 7, in 1982. Mona Hatoum’s work does not want to be just poetic (ie aesthetic), but implies a very specific political value: somehow the battered land from which the author comes has remained stuck to her skin and oozes in each work to the point of charging it with a strong symbolic meaning and tensions that welcome and reject at the same time. For example, we think that even for the cup designed for illy-Art-Collection, in 2021 and presented in the Frieze days, the author has recovered the keffiyeh pattern, proposing it as a sign of brotherhood and interconnection. As if to say, the roots do not betray each other or remain at the bottom, perhaps in silence, but always waiting to be able to re-emerge or to return to a new life.

The recurring themes are those of violence, oppression, vulnerability, at the beginning with particular attention to gender issues; later, the horizon of investigation widened and her complaint was addressed to collective, civil requests for coexistence among peoples, so much so that today she is considered one of the most important artists in the world precisely because of the commitment that oozes from each of her works.

Now, in Berlin, the work of Mona Hatoum, thanks to a perfect synergistic project, is presented in three institutional locations: the Kesselhaus (KINDL, Zentrum für zeitgenössische Kunst), the Neuer Berliner Kunstverein, the Georgbe Museum. These three exhibitions are curated, respectively, by Kathrin Becker, Marius Babias and Julia Wallner.

In particular, impressive and very engaging installation works are exhibited at the Neuer Berliner Kunstverein; we remember “Home” from 1999 and “Mobile Home II” from 2006.

Instead, for the Kolbe Museum, the author created the work “Electrified (variable V)” and exhibited repertoire works, such as “Remains of the day” from 2016-18 and “Inside Out” from 2019.

Finally, for KINDL, the artist created an imposing installation, exploiting the enormous height of the space of the former thermal power plant: it is a grid structure, reminiscent of the beams of a building under construction: a kind bone structure that also gives a sense of provisionality and imbalance. A framework that is not orthogonal but which, according to a perfectly deconstructionist perspective, could have been borrowed from the architecture of Frank O. Gehry. The work is a clear reference to the shocking times we are experiencing, to the precarious and collapsing situation that in an unexpected way, at one moment to another, can envelop and involve us. Today we are on one side of the border and our home is intact, while tomorrow we can be on the other side of the fence and our home is destroyed. In short, a powerful work, highly effective and certainly very topical.

This project is accompanied by a luxurious publication edited by Verlag der Buchhandlung Walther und Franz König of Cologne, with texts by Marius Babias, Kathrin Becker and Julia Wallner, who are also the respective curators of the three exhibitions.

Mona Hatoum. All of a quiver 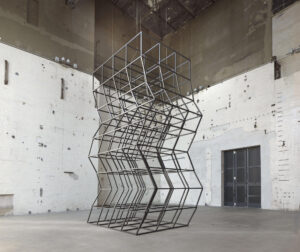 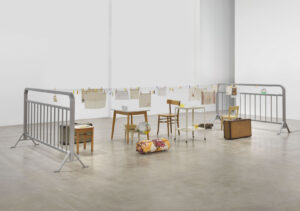 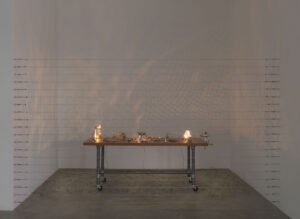 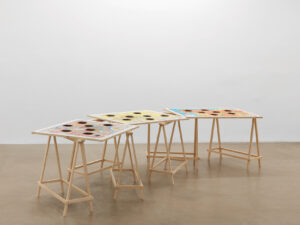 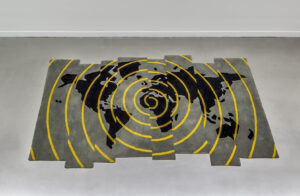