At the age of thirty, Florian Azzopardi decided to start, in 2018, the activity of an online gallery for the promotion of African art and to be ultimately a mirror and point of reflection of the contemporary scene, offering the authors a space to address topical issues, linked to not only local but also international topics, which are placed at the center of their artistic investigation. Then, in 2021, in the middle of the Covid-19 epidemic, he opens an exhibition venue in Paris, in rue Quincampoix. The inaugural exhibition is a collective entitled “Leaving the City”. The activity of this gallery is in line with the attention that for some years curators, gallery owners, fairs and museums have been turning to the African continent and therefore to the artists who still work there or to those who have been marked by the diaspora, by the transfer, from the escape.

Just to mark a pre-history (to use a term dear to Germano Celant), of this attention to extra-European creativity, within a globalized vision, I recall some fixed points: first of all I think it is a priority to remember the great exhibition “Magiciens de la Terre” curated by Jean-Hubert Martin for the Pompidou Center in 1989 and which pointed to the attention of the West, among others, the work of Chéri Samba. Then a wider and, in some cases, even anticipatory network comes to mind: for example the pioneering work done by Linda Givon, who founded the Goodman Gallery in 1966 in Johannesburg; and the Harlem Studio Museum, opened in 1968 in a loft of approx. 800 square meters, in New York. Subsequently, the Cape Town art fair and the Dakar Biennial dedicated to African art, as points of comparison and aggregation.

Here, the activity of Afikaris, which looks at the promotion of emerging African artists, must be placed within this frame of reference and in a market strategy that includes not only a simple exhibition activity, but also participation in trade art fairs (for example at Art Paris / Grand Palais Éphémère, from 7 to 12 September, where the gallery presented a group show with works by Saïdou Dicko, Salifou Lindou, Cristiano Mangovo; while at Somerset House, London, from 14 to 17 October, the gallery will bring the work of Moustapha Baidi Oumarou, Salifou Lindou, Omar Mahfoudi, Nana Yaw Oduro) and even the organization of traveling exhibitions and institutional collaborations.

The next appointment in the gallery is dedicated to the work of Moustapha Baidi Oumarou, born in 1997 in Maroua, in the north of Cameroon. The title of the exhibition (“Un monde bleu”) recalls not only a historical journey within the history of art (the mosaic of the Good Shepherd by Galla Placidia, in Ravenna; the mantle of the Madonna as regards traditional iconography; the skies frescoed by Giotto; the immaterial and spiritual accent by Yves Klein) but also a sense of collective belonging and global embrace in the name of a color that gives serenity to the beholder, and that makes one think of the vastness of the sea or the atmosphere. In this sense, Oumarou evokes the dream of an ideal world, a world where solidarity and friendship and peace can become universal values ​​and joy can be a daily condition and not a coincidence. Almost a Matissian instance comes to us to add.

Mostly these are “portraits” where people are not detailed in their physiognomic traits (thus becoming absolutes, universal values), but are instead revealed by the details of the clothes, gestures, poses and backdrops that contain them. I put the word “portraits” in quotation marks because the face of the depicted person is completely non-existent: these are anonymous faces that bring this painting closer to the figures by Giovanni Pulze, also devoid of physiognomic features. You do not see true spatiality, but rather a floating of bodies within an environment that defining decorative should not sound like an insult, but only as a stylistic choice. Also in this sense the Matissian lesson makes itself felt: cutting out the figures, plant elements to act as a curtain. The black model therefore loses its centrality and unlike other authors such as Amy Sherald and Kerry James Marshall where the theme of identity and authority and celebration are fundamental, in Oumarou all this fades towards an indistinct that takes on the flavor of a universal that looks at the human being as absolute and not as a single individual. Also because you know, the individual (the only one, so to speak) can claim to become a protagonist and the presumptuous protagonists can often become the antagonists lined up on opposite sides and with weapons in hand. 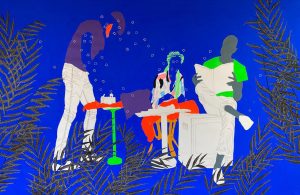 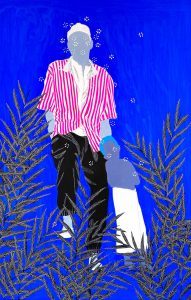 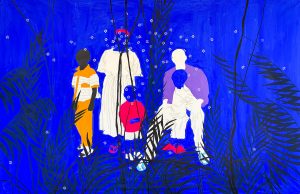