BienNoLo. Being within the exp..

TBA21 – Academy presents Ocean Space, a collaborative platform that aims at supporting Ocean imagination and Ocean action. It is based in the Church of San Lorenzo in Venice, following a period of restoration and revitalization of the historic building, thanks to Francesca Thyssen-Bornemisza and under the artistic direction of Markus Reymann.

The choice of the location results as the ideal setting for hosting a debate on the possibility of addressing a culture that could ‘speak’ of the hydrosphere.

The inaugural exhibition Moving Off the Land II is a project by the awarded American artist Joan Jonas, and proposes a reflection on ocean imagery in line with the artist’s preferred themes, such as for early works Mirror Piece, 1969, Waltz, 2003, and Reanimation, 2012, which explore the ancestral and mythological fascination of aquatic environments. While on the one hand the voice of Joan Jonas can appear to us as a siren’s song, on the other hand, the artist offers us a hyperreal, inedited look that reflects on the richness of these immersive contexts. In particular, the works presented at Ocean Space, part of the ongoing My New Theater series, since 1997, see the culmination of an artistic research project that was carried out in aquariums around the world, particularly as a result of an artistic residence in Cape Breton, Jamaica, where Joan Jonas entered in contact with local communities, as evinced from the collaborative spirit underlying her work. Similarly, for Moving Off the Land II, the artist collaborated with the Venetian glass artisans for the commission of an aquarium that is based on a nineteenth-century drawing depicting a mountainous underwater landscape.

We can read the exhibition starting from this cabinet de curiosités wherein Joan Jonas collects a series of marine objects – some collected by the artist in residence, others donated by friends – and display them in a glass case that is never completely transparent, but still in phase of crystallization, to remind us that the glass itself is the material in the first place, that establishes a link between sea and sand, through processes of stratification, sedimentation, and refinement.

It converses well with the immersive dimension of the video-projections presented for the exhibition in which the artist proposes an underwater imaginary that is characterized by an osmotic movement that compares the performative gesture of the artist with the sinuous movement of an underwater flora and fauna, that she rethinks as a ritual. Whilst the reflective panels placed at the perimeter of this immersive environment invite the viewer to rethink the perception of places at Ocean Space, a series of live-drawings emerge suspended at different heights along the aisles of the church, suggesting, as the artist herself says, a choreography of underwater figures that also reoccurs in her performance. Among all, the skeleton of a blue whale stands out as if inviting us to reflect on the sustainability and ecology that these environments demand in the contemporary.

For Moving Off the Land II, Joan Jonas has collaborated with the scientist David Gruber who, during the opening days of the exhibition, entered in conversation with another artist dear to TBA21, Olafur Eliasson, to discuss the phenomenon of bioluminescence in underwater environment. Similarly, the works of Joan Jonas explores a sonorous dimension, making use of collaborations which rangs from electronics, such as Ikue Mori‘s contribution, to the music of Maria Huld Markan Sigfusdottir and Ande Somby. Thus, adjacent to the spaces of Moving Off the Land II, we will encounter the sound installation The So (ng) qe / Tovuto Kyrrahafið Sound Field by artists Jónsi of Sigur Rós and Carl Michael von Hausswolff who assemble an immersive landscape of sound and ocean waves. As a corollary of this project, Ocean Space invites a deeper study on this topic, by suggesting a series of literary texts that rethink the ocean imagery in a sustainable way. At Ocean Space, the writings by Emily Dickinson, T.S.Eliot, Jules Verne and and Herman Melville are in dialogue with the socio-scientific texts by Rachel Carson, Sy Montgomery, and Peter Godfrey-Smith. 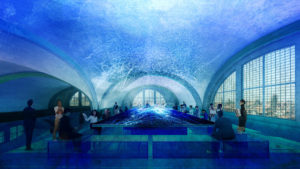 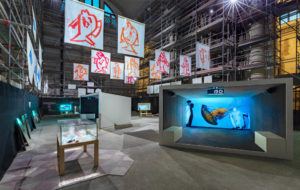 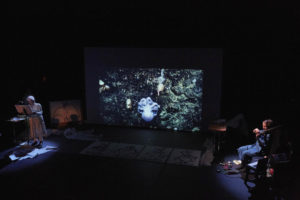 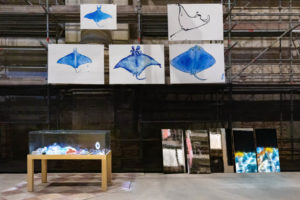