Paola Santagostino is a psychoanalyst specialized in psychosomatic medicine who in the last few years has decided to combine her profession with artistic production, to which she has systematically dedicated since her graduation in painting at the Academy of Fine Arts of Brera in 2017. Her interest is directed towards an abstract and expressionist research that makes physical automatism, intuition and emotion its inspiring principle with the aim of exploring the bonds between mind and body at the origin of physical and mental well-being. Passionate about art from a young age, she says she unexpectedly found painting again; thanks to the psychotherapy sessions with her patients: “As I hold a session, I follow the development of the session with drawing signs, I follow it by points and lines of connection and visualize it in an almost geometric way as a network of concepts. When the session is over, I throw away those sheets of paper, for me they have already served their function, but my patients ask to take them with them, they even go and retrieve them from the wastepaper basket, asking me to keep them to remember what we said and the thread of the session that we had”. Encouraged by these feedbacks, the artist decides to consider more seriously her natural predisposition for unconcious drawing and elaborates her personal expressive language starting from those signs born in an apparently so different context.

Initially, she extrapolates from her extemporaneous notes those elliptical circles which, repeated and superimposed, it becomes the minimum units of her compositions and that flowing on the canvas and intertwining each other, visualizes a real “flow of thoughts”, a succession of graphic ideas that manifest a state of mind. The speed of execution granted by the acrylic painting and the impetuousness of the pictorial action enhances the primary role of the free creative drawing, understood as an immediate taking of the reality released from any intervention of cognitive and rational type. Obviously the reality referred to is the inner one of the artist, which derives from a complex amalgam of perceptions, moods and reactions to life events. The succession of canvases forms a sort of intimate diary that the universality of the pictorial language adopted makes archetypal and therefore easily introjectable by the viewer whom unconsciously adapts it to his/her own experience. This spontaneous graphical writing, an instant projection of a mental state, is interesting for its oxymoronic nature, capable of bringing together maximum impulsiveness with an extremely rigorous creative process.

After choosing the color range to be used based on the chosen theme and the specific symbolism of each color, Paola Santagostino lets instinct guide the dance of the brush on the canvas, as if her hand were a seismograph capable of capturing her inner vibrations. The gestural and lyrical abstraction that derives from the total bodily and emotional involvement transfers into painting the images and mental associations that flow from the unconscious without any mediation of reason:  it is a physiological transmission that lays the foundations of empathy and subliminal understanding of the image. This method has many points of connection with the surrealist psychic automatism which, as André Breton explained in the 1924 Manifesto, sought to express the real functioning of thought outside of any aesthetic and logical concern. It is no coincidence that Paola Santagostino names Thoughts as the visual situations identified by the ellipses, but her intent is in opposite with the protagonists of the historical avant-garde; it is no longer an aim for exploring the mysterious mechanisms of the unconscious but of using their mastery to depict; in an engaging way, the infinite possibilities of existence.

The next step is to add together different Thoughts to sketch Discources, or compositions of primary and secondary abstract signs that fit together to form more articulated constellations of meaning. Here the execution takes on an even more markedly performative character: Paola Santagostino listens to connect with the deepest part of herself, then with her eyes closed she begins to trace the marks on the canvas with her left hand, whose movement is guided by the right hemisphere of the brain, most implicated in emotional processes. Despite the apparent randomness of the execution, the image is almost always structured starting from a central axis, then developing through orthogonal lines and semicircular curves pushed outwards by centrifugal forces. The most pronounced central line indicates “the thread of discourse” that connects the various concepts while the most subtle signs are the minor related topics and in the end, in very small but legible characters, the artist adds some words that stimulate the intellectual participation of the viewer. 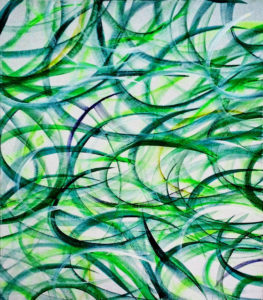 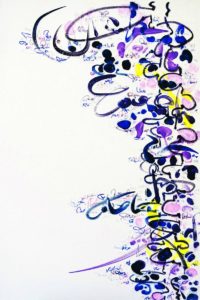 Clouds of signs gather in a cluster around an imaginary longitudinal line that constitutes the fulcrum of attraction of a kind of electromagnetic field in which each element finds its own orbit in relation to the others. The structure evokes a vortex movement,  but also the luxuriant growth of a plant or the joyful propagation of a music, all dynamic entities in constant tension between the synthesis and the dispersion that are well suited to visually embody the metamorphic identity of the human being. The purpose of not being conditioned by the formal result to prefer improvisation does not imply an absence of limit or sense of measure: like the calligraphy of the Far East, the painting of Paola Santagostino does not admit mistakes, second thoughts or uncertainties and requires a clear and confident gesture generated by an equally lucid proprioception. Her paintings, in an enigmatic equidistance between abstract expressionism and the conceptual map, instinct and methodicality, try to harmonize the multiple contradictions of being in the world and convey a positive feeling of enthusiasm and vitality.