Almost twenty years after her last exhibition in Rome, Pat Steir returns to the capital until May 7, 2022. In 2003, for Galleria Nazionale d’Arte Moderna e Contemporanea, she exhibited twenty-eight canvases that recounted her journey from 1986 to 2003 and were inspired by water and air, immaterial substances in fact. This time, at the Gagosian Gallery, there are eight canvases and they are all recent (2021-2022). Paintings is configured as an essential but engaging exhibition, which, thanks to the large and bright gallery space, acquires a wide breath.

In an article from 2003 Steir was defined as a woman apparently fragile but endowed with a great strength, today the artist is a more experienced person who shows especially through her works, great confidence and tenacity. Born in Newark in 1940 but New Yorker by adoption, she lives and works in New York and she is one of the few artists who managed to come to the attention of the public in the seventies, like artists such as Eva Hesse and Martha Rosler. Steir’s long career is studded with great successes: from important personal exhibitions to the inclusion of her works in prestigious collections, such as the Museé du Louvre in Paris, the Tate Modern in London and the Guggenheim Museum in New York.

The art of Steir shows a strong american matrix, the assonances with Jackson Pollock‘s dripping and abstract expressionism are evident but there is also a reference to conceptual research, a typical trend of the artist’s generation. The process of dripping, which inevitably recalls one of the greatest artists of the fifties, Pollock, in Steir, however, presents differences due to a different research and divergent ways of working. To Pollock we certainly owe the ability to have embodied a new idea of artist and work; Steir instead, who was inserted in that furrow of new figurative research, was able to find an autonomous form of expression, which transcends the split between figurative and abstract. Moreover, if Pollock’s large canvases were placed on the floor and demanded a frontal and continuous relationship with the artist and the action of the latter on the canvas produced the work, Steir instead works maintaining a position of apparent predominance: she paints from a ladder placing the canvases vertically but the casting is entrusted to the color itself that is guided by gravity, because the actual action of the artist is reduced to the first touch of the brush on the canvas. Furthermore, her large canvases aspire to be a translation and synthesis of the typically western pictorial tendency and eastern philosophy.

Hence not only, a more performative structure but also an approach more influenced by improvisation: the artist does not demand control over the pictorial material, so she gives the color to the ability to create, without forcing or limitations for the viewer, who is thus free to test their imaginative capacity. Steir does not seek a figuration but she is not a purist of abstractionism, rather she imprints on her canvases a vision in which the hand of the artist does not predominates, but the imperative force of color: the function of the artist, the idea, the hand and the creative abilities are subordinate to the material.

It is to color that the creative power is entrusted. Even supposing that the artist is inspired by an image, what can be glimpsed is a memory that can take any form and that suddenly becomes personal and interior. The paintings on display at the Gagosian Gallery express that communicative immediacy typical of Steir and are composed of dripping polychromatic layers, which manage to combine beauty and depth. 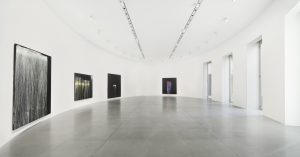 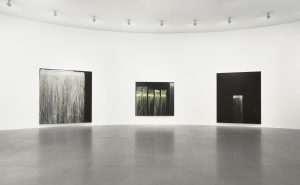 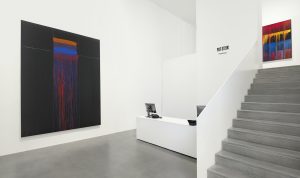 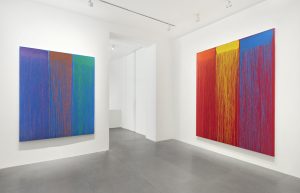 For all the images: Pat Steir, Paintings, installation view. Photo by Matteo D’Eletto M3 Studio, courtesy Gagosian and the artist.