When criticism meets the artis..

Pat Steir returns to Rome with..

The 26th edition of miart has just ended, directed for the second time by Nicola Ricciardi. Three sections proposed, Established, Emergent and Decades, with an incorporation of the Objects section, dedicated by the former director Rabottini to design, in Established and the disappearance of the site specific On Demand section and Generations, focused on the intergenerational comparison. A simplification of the fair’s skeleton and perhaps a turnaround, which can be read in the choice of positioning the entrance to the fair in the emerging galleries section.

Already from the statement and the cover image, the aim of this year’s edition was evident: to make a “leap forward”, after the last autumn season full of Italian and international fairs, the first ones in attendance after the interminable postponements of the past two years. “And then we went out to see the stars again”, to quote the Dante’s neon work by Alfredo Jaar exhibited by Lia Rumma (Milan, Naples), together with the photographs by Thomas Ruff and Gianmaria Tosatti and the aluminum silhouettes by William Kentridge.

There were many engaging stands, such as the one played on the orange, black and white colors of the Alberta Pane gallery (Paris, Venice) with the minimalist works of the Croatian Igor Eskinja and Esther Stocker, or the monothematic one by Copetti Antiquari (Udine), a homage to Latin America by Emilio Scanavino and Alik Cavaliere. Powerful, due to the – not only visual – weight of the works, the alternating staging by Louise Nevelson and Enrico Baj at Gio Marconi.

Closed by a shaped aluminum curtain by Daniel Steegmann Mangrané the stand of Francesca Minini, Milan, and Massimo Minini, Brescia, who proposed works by Enzo Mari, Jonathan Monk and the beautiful starry collages by Flavio Favelli. On the other hand, the stand of Studio G7 in Bologna was closed by a cloth by Daniela Comani for the “work in progress” installation, which reconstructed a precarious situation with partially set up ground works and wooden tables resting on trestles.

Interesting solutions also in the emerging galleries, where the brightly colored floral walls of the Sperling gallery, Munich, and UNA, Piacenza, which offered the solo show by Thomas Berra, stood out. The developments of Gilda Lavia (Rome), Gaep (Budapest) and Octagon (Milan) will also have to be followed.

The works of Maria Elisabetta Novello were also very convincing, exhibited by Galleria Fumagalli (Miano) alongside those of Jannis Kounellis in a project of updating the great master, in the attempt to make human existence less ephemeral by fixing, between glass plates, ash, dust or leaf fragments collected in an instant of time. The turning point of Salvatore Arancio, presented by Schiavo Zoppelli gallery, is also seductive, and passes from small sculptures of material concretions to collages of photographic landscapes in black and white. Also noteworthy are the small textile works by Thomas de Falco at Richard Saltoun, London, and the good selection of fiber art works at Primo Marella (Milan), who proposed the impressive triptych of ribbons by the Malagasy artist Joël Andrianomearisoa and textile compositions of overlapping strips by the Malaysian Abdoulaye Konaté.

Among the ten stands of the Decades section, one per decade, the black and white one by Franco Noero (Turin) stood out with the works of Robert Mappelthorpe for a story from the seventies, and that of Vistamare (Milan, Pescara) which represents the 2000s through the luminous works dedicated to the landscape by Mario Airò, one of which was chosen by the Acquisitions Fund of the Fiera Milano Foundation. Among other acquisitions, also the small plaster casts by Silvia Bächli exhibited by Raffaella Cortese, Milan, on a small table next to Marcello Maloberti, Kiki Smith and Monica Bonvicini‘s phallic works that update Duchamp’s dish drainer. 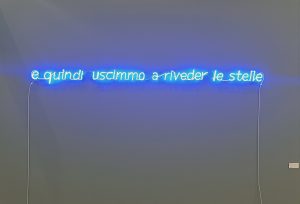 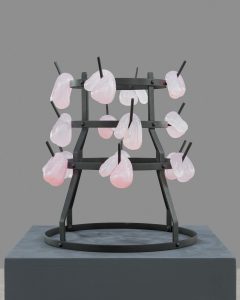 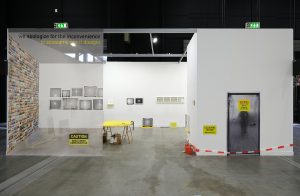