The exhibition “Lucio Fontana. Self-portrait”, is open until 3 July 2022 at the Magnani Rocca Foundation, an ancient Villa in Mamiano di Traversetolo, in the green heart of the Parma countryside, curated by Walter Guadagnini, Gaspare Luigi Marcone and Stefano Roffi. About fifty works from different museum institutions are exhibited, such as the Lucio Fontana Foundation, Mart, the Museum of Modern and Contemporary Art of Trento and Rovereto, the Museo del Novecento in Florence, CSAC, the University of Parma, etc. and from other important archives and private collections. The idea of ​​the project of the exhibition itinerary is inspired by the interview that Carla Lonzi, a pupil of Roberto Longhi, had with Lucio Fontana and which she collected in the text: “Self-portrait. Accardi Alviani Castellani Consagra Fabro Fontana Kounellis Nigro Paolini Pascali Rotella Scarpitta Turcato Twombly” edited by De Donato, Bari, in 1969, along with other talks with other artists from that time. In the video at the entrance to the Villa, this interview is reproduced, recorded with a cassette player, thanks to which it is possible to hear the voices of the two and the thoughts expressed by Fontana.

Testa di donna is the first sculpture that opens the exhibition itinerary, set in the hall of the Foundation that houses the treasures of Renaissance art, placed at the foot of Titian’s Sacred Conversation, to emphasize how Fontana was strongly linked to figurative art, especially through the use of sculpture, having assimilated the lesson of Adolfo Wildt at the Brera Academy of Fine Arts, where he studied. There are other sculptural works, from which it is possible to notice the multiplicity of expressive registers chosen by Fontana, such as Baroque and Futurism, immediately placing himself as a breaking artist. He was innovative, but at the same time tied to tradition, from which he took inspiration for reflection, for the search for a new language that took into account the variability of the world of those years and the impact of technologies, new ways of communicating, starting from the television and the new materials that were developing and outlining. As stated by Renato Barilli in his essay L’arte Contemporanea, “Fontana is perhaps the only one to feel the concern of combining the ‘artistic gesture’ with scientific and technological thought”.

Explanatory of this revolutionary thought was the large neon tube with sinuous shapes created for the IX Triennale di Milano (1951). It is from this continuous research that in 1954 in Argentina, his birthplace where he had returned to escape the Second World War, he published the Manifesto Blanco, manifesto of Spatialism, or of a new artistic movement that expressed the need to overcome the canvas as pictorial space and to consider a spatial, cosmic dimensions in which to express thoughts by creating a modern cosmology, outlined through different symbols. “Space not intended as an empty container, but as a place for the irradiation of wave energies or for the explosion of nuclear phenomena. Hence the ‘ethereal’ character, which Fontana’s solutions always had, unlike the accentuated materialism or gesturalism of others” (Renato Barilli, L’arte Contemporanea).

Hence the idea of ​​creating ‘Holes’, which gave the title to many works. The canvas was pierced and with it also metal plates, scratched through an awl, where the artist, like faber, created sequences of empty and full, intermittent intervals of a thought that evolved through the creative act, becoming itself an object of study and interest. And precisely the amalgamation of thought and action is what the famous photographer Ugo Mulas tried to capture and immortalize in the sequences of shots shown in the exhibition, thus giving a performative meaning to the artist’s work not only during the generation of the sequence of holes, but also of the famous Cuts. As claimed by Gillo Dorfles, in Preferenze Critiche they characterize “very pure canvases, where the only immediate and dazzling gesture of the cuts affixed an irreplaceable signature to the painting”. The perforated, cut canvas puts the viewer in communication with the infinite; the two-dimensional space, with the three-dimensional space of the cosmos and galaxies. But Fontana’s attention also focuses on light and materials, studying their reflections and shadows. In the Concetto Spaziale. New York (1962) the long cuts on the copper surface give the verticality of those skyscrapers that Fontana was struck by, but at the same time the sheen of the plate allows the reflection of light downwards, recalling the effect produced by the skyscrapers of Manhattan on the sea that surrounds it. In the evolution of the thought that characterizes the artist, in the ellipsis, which unlike what critics attribute to him, that is to say that he is a profound connoisseur of physics and Einstein’s theories, he finds the simplest, the most suitable form for describing the concept linked to the expansion of the universe.

And on the surfaces of the most different materials, he continues his research through the creation of holes, which again become means for the revelation of infinity. The exhibition itinerary ends with a succession of works by various artists such as Enrico Baj, Alberto Burri, Enrico Castellani, Luciano Fabro, Piero Manzoni, Giulio Paolini, Paolo Scheggi, with whom he had established relationships of comparison and exchange. Of particular importance is the work Linea m 9.48 by Manzoni, bearing a handwritten label written, of which Fontana recognized the importance, being, as stated by Barilli «works that anticipate conceptual art, in how well they offer little physical support, requiring a large and prevalent imaginative integration; typical in this sense are the containers that contain lines of various lengths, however usable more than anything else with the imagination”. The work La fine di Dio, elliptical in shape, like an egg on whose surface there are multiple holes, completes the exhibition itinerary and, as Fontana himself explained to Carlo Cisventi in an interview in 1963: “For me they mean the infinity, the inconceivable thing, the end of figuration, the principle of nothingness ». Fontana says of this cycle: “There was the hole that is always nothingness, right? And God is nothing […] God is invisible, God is inconceivable. Therefore, today an artist cannot present God on an armchair with the world in his hand, a beard … So here, even religions, must update themselves with the discoveries of science […]». The catalog published by Silvana Editoriale, which in addition to the contributions of the curators also contains those of Paolo Campiglio, Mauro Carrera, Lara Conte, Maria Villa, accompanies the exhibition. 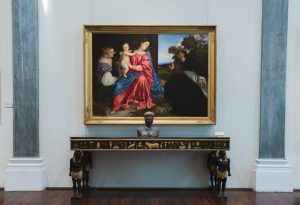 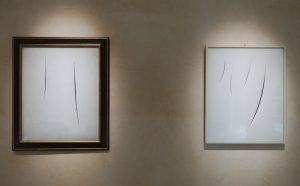 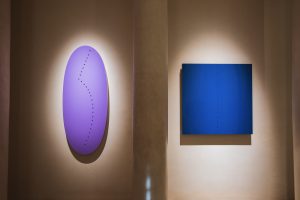 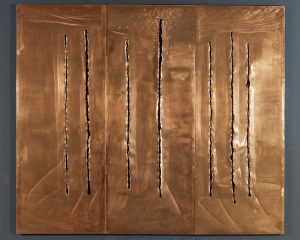 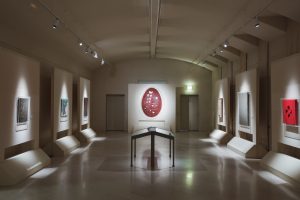