When criticism meets the artis..

Nearly everyone may have wondered, visiting fairs and galleries, what would be the destination of the works sold and if it would ever be possible to see some of them again after their entry into a private collection. We also often ask ourselves what is the criterion that guides each collector in the choice of pieces and if some selections have a common thread capable of making us intuit artistic phenomena that, removed from the noise of the fair and social networks, succeed in the silence of the collection make their voice heard more distinctly.

In most cases these curiosities, for the general public, remain unsatisfied and the life of the works after the end of the exhibition remains shrouded in an aura of mystery. The LINGUAVIVA group show at KAPPA-NöUN, an exhibition space founded in San Lazzaro di Savena near Bologna by the collector Marco Ghigi opens a glimpse on these questions so that his collection, which ranges from the great masters already historicized, to the mid- career, to the very young able to grasp the problems of the present in their emergence, can also be enjoyed by the public.

The protagonists are actually five young Italian artists: Matteo Fato (1979), Thomas Berra (1986), Giulio Saverio Rossi (1988), Alessandro Fogo (1992) and Andrea Marco Corvino aka LOL63 (1993), for a total of ten works created over the years. Each of them proposes a different approach to painting and the theme on which their convocation focuses, in the words of the curator Antongiulio Vergine, is the idea of ​​”understanding painting as an autonomously living organism, capable of communicating and, therefore, of its own language”. Another aspect that unites the five artists is the fact that they are represented by local galleries, an indication of Marco Ghigi’s commitment to supporting galleries that take the risk of presenting research projects and growing over the years together with their artists.

Entering the exhibition venue, a real white cube, whose surgical rigor is softened during the day by a very soft and veiled light, one encounters Untitled (Somersult), 2015-2017, by Matteo Fato, an imposing pictorial object formed by the painting and by its plywood transport case, whose components, once disassembled, function as frames and supports in order to make the work self-sufficient in its relationship with the space. Even the artist’s painting tends markedly to three-dimensionality and is structured in dense overhanging material brushstrokes that build the image by sculpting its proportions with strong color paths.

Alessandro Fogo‘s poetics, on the other hand, is based on a nuanced and evanescent figuration that creates enigmatic atmospheres, an expression of a druidic surreality in which virtuosity and primitivism are mixed on the same visual level. The artist’s imagery seems to mix surrealist practices, formal severity from the “return to order” italian artistic movement, video game sulphurous gleams and poetic licenses to generate syncretic visions of parallel realities which, while manifesting themselves for details out of context, are assumed as a whole, globally.

Giulio Saverio Rossi thinks about the relationship between the pictorial medium and vision by playing with different registers of expression ranging from abstraction to magical mimesis. In the exhibitions the two souls of his research are represented by Gipsoteca, 2019, a large canvas that investigates the visual vibrations of the gypsum element – material used in the preparation of the canvas – in its natural rocky state and ITEM, 2021, which represents an uncanny gun suspended in an indefinable semi-natural landscape. Here the reference is to the digital world and to the possibilities of painting to evoke its psychic presence and its constitutive evanescence.

Thomas Berra also proves to be interested in several pictorial registers, which, however, do not have to do, as in Rossi, with the analysis at different levels of the texture of things, but on the contrary seems to want to experience how varied could be the worlds created by the qualities and gradations of the pictorial texture. On display we see both a lifeless plant screen that intrigues for its indeterminacy, halfway between the footprint of the herbarium and the decorations of a tapestry (Non ho fatto nessun tentativo se non quello di immaginare di dipingere casualmente un bel quadro, 2018) , both a dense visual synthesis in which the compactness and brilliance of the colors seem reminiscent of cloisonné enamels (Beccanaso, 2022).

LOL63 dedicates himself to the translation of his immediate and extravagant expressive painting into different media: the artist is a young muralist who approaches “easel” painting and upholstery, combining joyful experimentation with an unsuspected intimist inspiration, suggested by the titles of the works. The artist, discovered personally by Marco Ghigi, will paint a permanent mural intervention outside KAPPA-NöUN which will be shown on the occasion of ART CITY Bologna, a schedule of widespread artistic events which, like every year, will act as an urban sounding board for the next edition of Arte Fiera, scheduled for May.

In conclusion, LINGUAVIVA presents an interesting survey of some emerging pictorial trends that demonstrate how figuration can still be a language to be re-launched and to reflect on and is a positive example of how a collection open to the public does not remain (to use an easy game of words) dead letter and can sometimes offer those opportunities for confrontation on the most current contemporaneity that Italian institutions seem to prepare with difficulty and slowness.

Opening hours: every day, from 16.30 to 19.30.
It can be visited by appointment only.
Contact in advance: kappanounart@gmail.com
KAPPA-NöUN
Via Imelde Lambertini 5, San Lazzaro di Savena (BO) 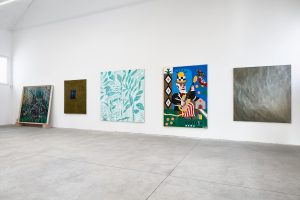 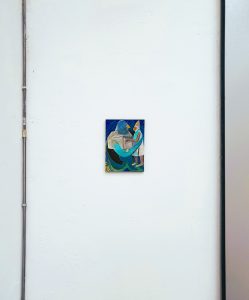 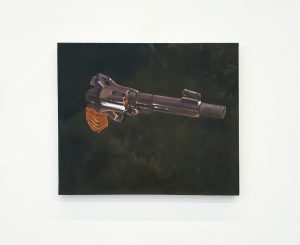 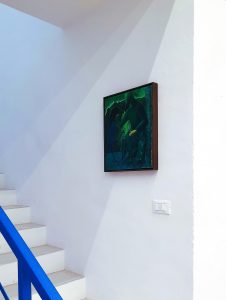